In 2019 I conducted an auction in Nur-Sultan, Kazakhstan, to raise funds toward protecting the dwindling population of snow leopards. Included in it was a clutch bag by Olympia Le-Tan. There was spirited bidding, and to my own surprise the price had climbed up to $90,000 by the time I sold it to a very elegant lady in the room.

A few days after the auction, OLT’s cofounder Grégory Bernard asked me to curate a collection of clutch bags for them. I accepted, as at a number of galas and special events I had been struck by the originality of these accessories, which reimagine classic book covers and art, and were invariably worn by the most interesting women. Olympia Le-Tan managed to create an exquisitely crafted fashion accessory that looks as good when in use or when simply lying on a coffee table.

I was a great admirer of Olympia’s father, Pierre Le-Tan, whose illustrations graced the pages of numerous publications, including the New Yorker, Vogue, and the New York Times Magazine. He was also a connoisseur and eclectic collector. I had the privilege of being the auctioneer for the sale of part of his collection at Sotheby’s in London in 1995. 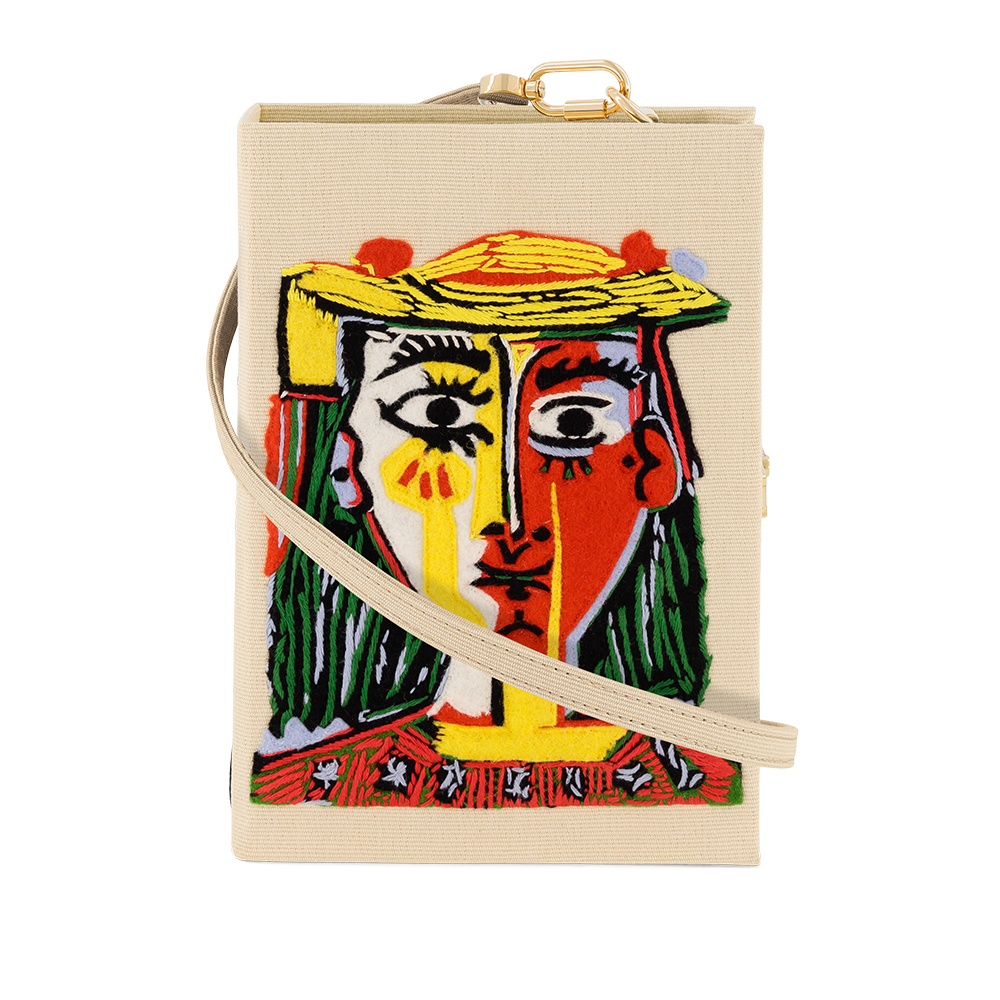 Before giving thought as to which favorite album or book covers to select, I felt the dream would be to choose works by the greatest artist of the 20th century, Pablo Picasso. I called Almine Rech Picasso to discuss the idea. She put me in touch with the Picasso Administration, for whom OLT prepared a detailed proposal. The embroiderers and stitchers started the search for the finest silk threads that would faithfully render the color range of the original works. Little did I realize that, after it was agreed, it would take months for each clutch bag to be produced. OLT will therefore come out every few months with another Picasso clutch in limited editions of 77.

This fun project made me reflect on the cross-fertilization between the worlds of art and fashion. The greatest fashion designers were at all times naturally drawn to art. It is therefore hardly surprising that some of them figure among the greatest collectors. Picasso’s seminal 1906 masterwork Les Demoiselles d’Avignon, which is one of the quintessential works hanging at the Museum of Modern Art (MoMA), used to belong to the French couturier Jacques Doucet, who bought it in 1924. Karl Lagerfeld, Yves Saint Laurent, Valentino Garavani, Giancarlo Giammetti, and Hubert de Givenchy are not only part of the pantheon of fashion but are also some of the most significant collectors and tastemakers in the world of art.

Despite that, there were clear borders between art and fashion. For an artist to do work for a fashion brand would have been seen as a perilous exercise.

The actual game changer was Bernard Arnault, the chief executive and owner of LVMH. Under his leadership, the designers of his main brands—above all Louis Vuitton and Dior—have instigated some of the most successful collaborations between artists and fashion houses to ever take place.

When a big retrospective of Takashi Murakami took place at the Museum of Contemporary Art, Los Angeles, not only did a number of paintings include the LV logo, but one room was devoted to the bags the artist had created for Vuitton, and they could be purchased then and there in the museum. Those manning the cash register must have been thrilled, but it made the soi-disant defenders of high art cringe. 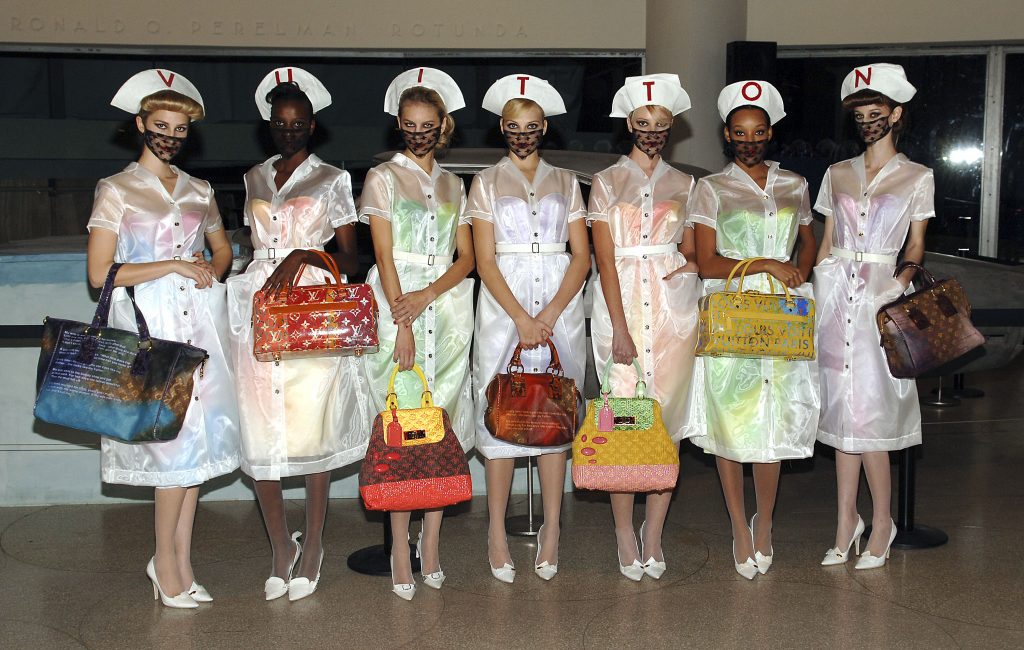 I am an unconditional admirer of Richard Prince, so when Marc Jacobs chose him to design a series of Vuitton bags covered with his jokes and nurses, I was ecstatic. The bags were released gradually, and the chief salesman at the LV store on the Champs-Élysées had the power to decide who was worthy of acquiring them. I would show up after each new release. He would ask me, “Did your wife like it?” I was not married at the time, but did not dare to admit that I was buying them for myself. The prices for Prince’s paintings were rising steeply, so while the bags are not exactly cheap, they were clearly more affordable than his canvases. I still have them wrapped up, and have actually never opened them.

The collaboration between Yayoi Kusama and Louis Vuitton helped towards establishing her in the art-world firmament. While the bags she created for the brand were being sold, her original paintings were being presented on the VIP floor of the Vuitton store on Bond Street in London. I was particularly fascinated by little plastic figurines of the artist herself. I was desperate to get my hands on one and used all my contacts, to no avail. I was told that they would all be destroyed once the display was over. I don’t know whether this really happened, but I have not come across any such figurine since. KAWS managed to do collaborations to satisfy both his “high” and “low” fan bases more or less simultaneously, when he collaborated with Dior and Uniqlo. I tried my luck at Uniqlo to get a T-shirt for my youngest daughter, but they were all sold out. 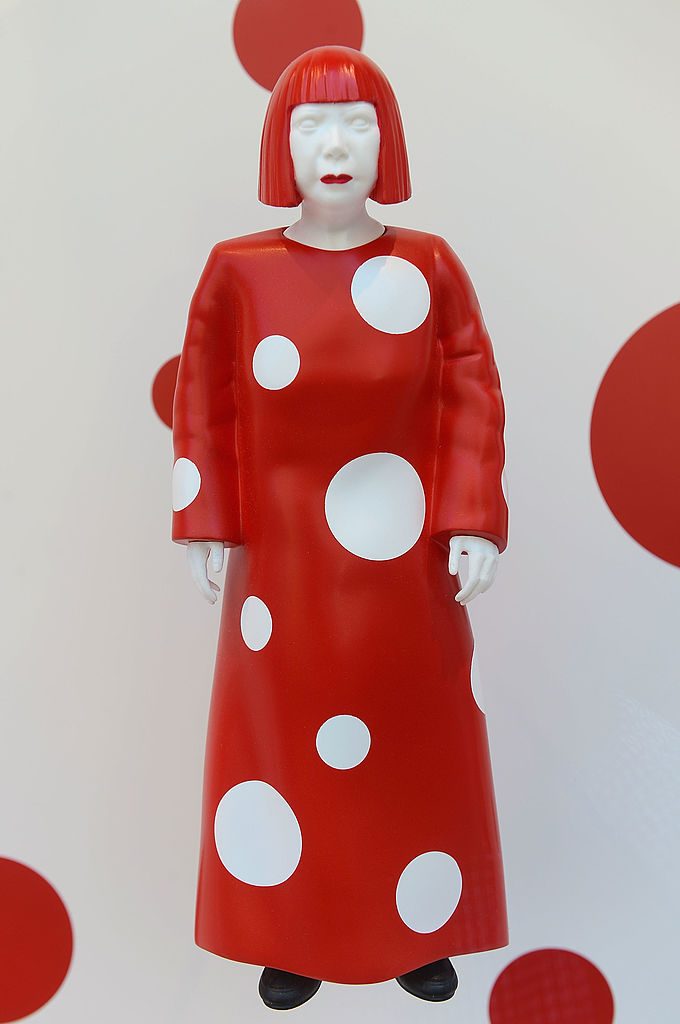 A general view during the unveiling of the Louis Vuitton and Yayoi Kusama collaboration at Louis Vuitton Maison on July 10, 2012, in New York City. Photo by Dimitrios Kambouris/WireImage.

I always felt that the work of Kenny Scharf was undervalued. His current collaboration with Dior has changed this. There has been heated competition for his works in recent auctions. There again are wonderful plastic sculptures created by Scharf for the Dior shop windows around the world. Here as well, I was unable to acquire any of them. Urs Fischer has also decorated the Vuitton window displays around the world. There would be a red-hot collector’s market for the temporary display objects the main fashion brands use for their collaborations with artists.

For his collaboration with the Vuitton brand, Jeff Koons used some of the biggest brands of art history: Da Vinci, Titian, Rubens, Fragonard, Boucher, Turner, Van Gogh, Gauguin, Manet, and Monet. Not only did he employ some of their best-known works, as he did in his gazing ball series, he also plastered their names in metallic capital letters across the accessories. The LV logo had a JK logo symmetrically placed across it, and a Koons rabbit in leather was attached to each bag. It was a brand splashing brands on a brand. In 2014, I auctioned a Koons sculpture inspired by Picasso’s Blue Period work La Soupe, which had several Hermès Kelly bags hanging on its arms. The proceeds went to a United Nations campaign for vaccination—we could use such a campaign now!—that was supported by Svetlana Kuzmicheva-Uspenskaya.

In the nearly 20 years since the initial cooperation between Takashi Murakami and Vuitton took place, such collaborations no longer ruffle the feathers of “serious” art lovers. On the contrary, the wider reach and recognition the fashion world is a must for any artist wishing for mainstream notoriety. With at least 40 percent Asian buyers in the main international contemporary art auctions, this is not surprising. After all, many of Asia’s mega-malls, notably in Japan, have been cultural dynamos, staging art exhibitions since the 1960s. As a believer in contemporary culture overall, I applaud the blurring of lines between the worlds of art, music, fashion, architecture, design, photography, and cinema.