See 10 of the Exhilarating Installations at the Spring/Break Art Show, From a Shrine to Giantesses to One Absurdly Big Ham


Spring/Break Art Show, the upstart cool kid’s fair, kicked off its 10th New York edition—yes, you read that right—in uncharacteristically subdued fashion on Wednesday, keeping crowds to a minimum during its collectors and press preview as a health precaution.

“It’s strange,” Ambre Kelly, who co-founded the fair with husband Andrew Gori, admitted to Midnight Publishing Group News. “But the curators say they’ve been having these great conversations with collectors!”

And while the fair was quieter than usual, it still delivered its usual infectious mix of immersive installations, with most curators opting to eschew the traditional white cube and embrace the quirkiness of the office building setting, even to show drawings and paintings. (The fair is taking place in Ralph Lauren’s former headquarters for the second year running.)

This year’s theme was “Hearsay:Heresy.” As always, interpretations varied widely, with artists exploring Medieval artisanship, Catholic imagery, and concepts of the plague, public shaming, and heretical beliefs. Installations ranged from meditative chapels and ornate altarpieces to a giant, self-slicing honey-baked ham. Here’s a look at ten of the highlights. 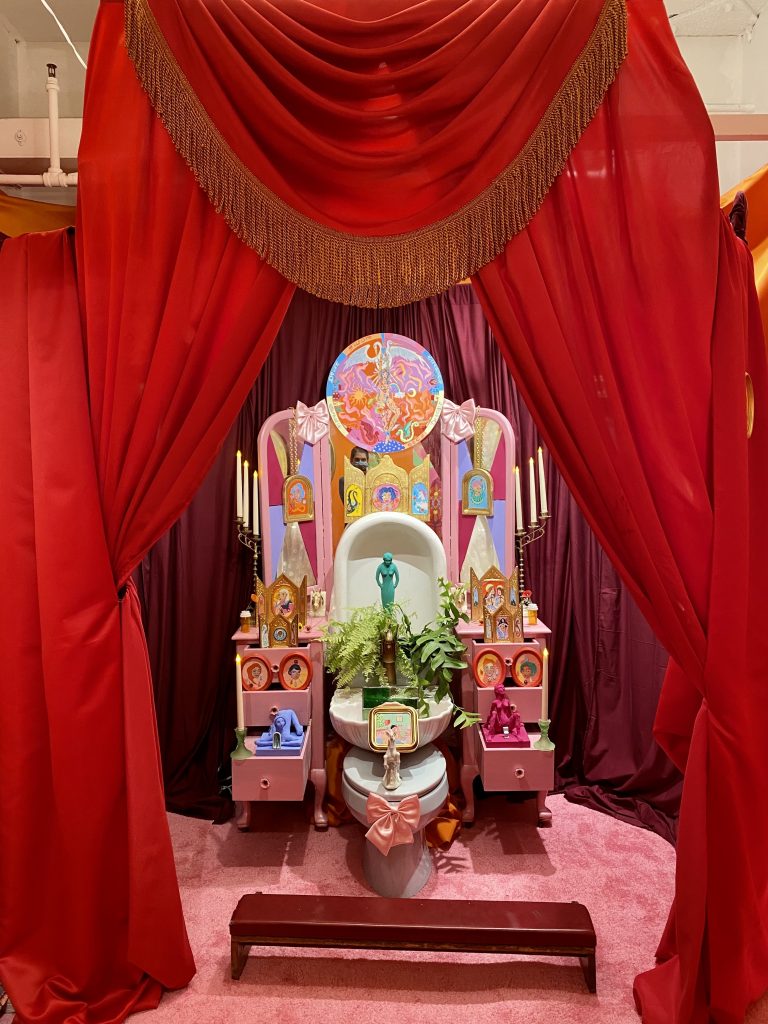 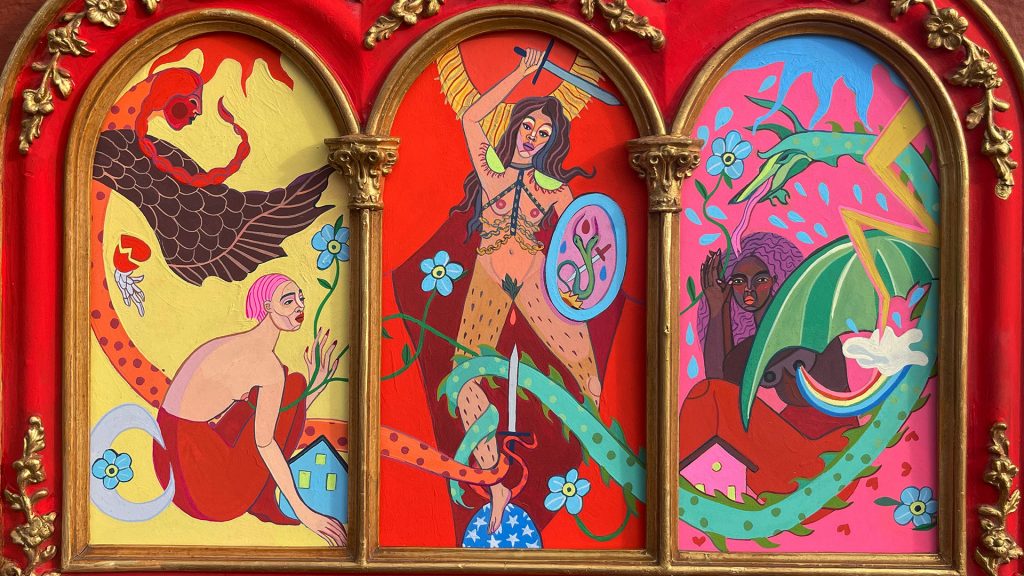 In her installation of brightly colored paintings, Meg Lionel Murphy has reimagined the castle keep as a bathroom—the safest spot in the home, both from the natural threats of hurricanes and tornados and from a domestic abuser, as it is often the only room that locks from the inside.

The artist, who was raised Catholic, actually repurposed vintage religious icons with ornate gold frames to build her own shrine, painting over them with images of female giants who roam the earth, recurring characters from her work.

“I started weaving my own mythology that I’ve been building for years into Catholic imagery,” Murphy told Midnight Publishing Group News.

“Book of Ours: Phil Buehler”
curated by Sarah Celentano 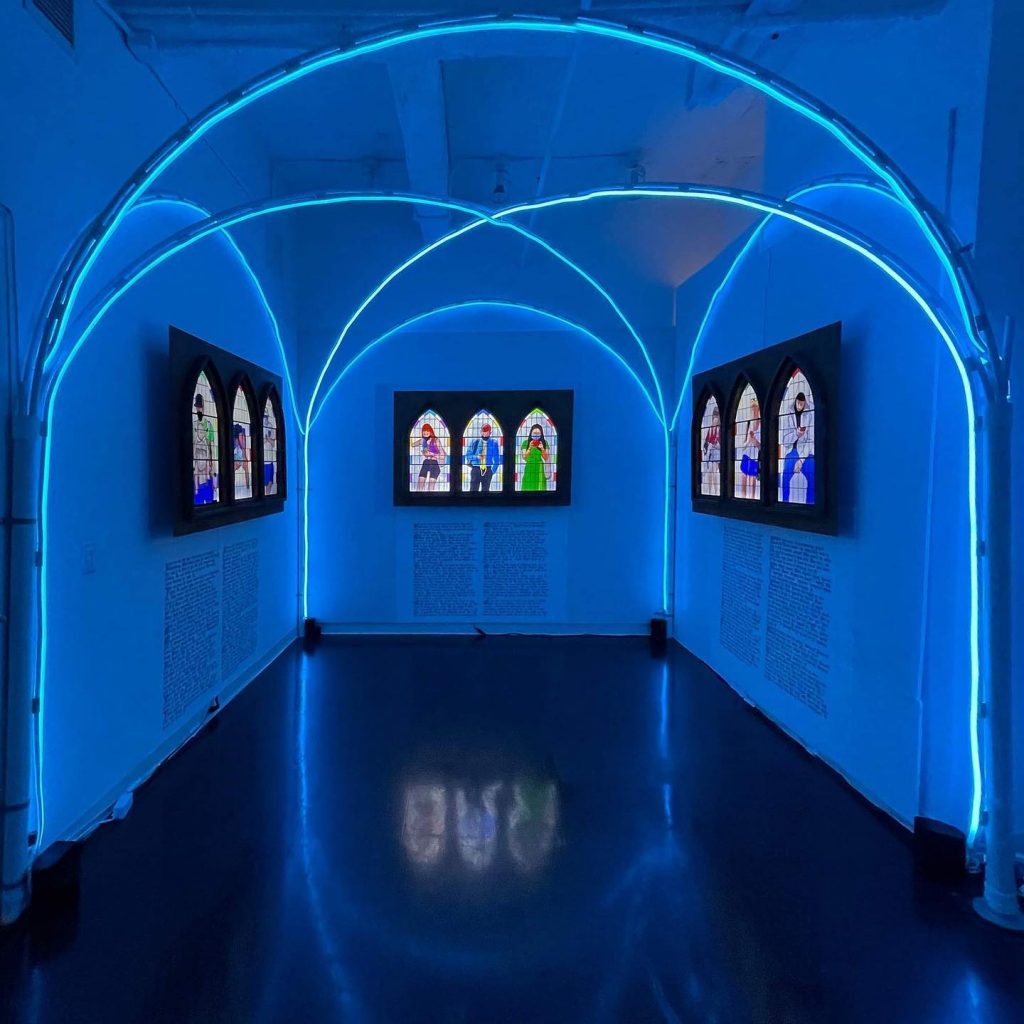 “Medievalists have been comparing the smart phone to the Medieval book of hours for years,” curator Sarah Celentano, a medievalist and former staffer at New York’s City Reliquary told Midnight Publishing Group News. “They are about the same size, people use them in public, and they are luxury items.”

Phil Buehler has run with that comparison, surreptitiously snapping photographs of New Yorkers engrossed in their phones and turning the images into stained glass-style images displayed on a smart TV mounted in a wooden frame shaped like an arched church window.

The meditative display, beneath a vaulted “ceiling” of blue lights, is paired with dispatches from QAnon printed in Gothic script that Celentano selected for their biblical cadence. “Smart phones give us access to limitless information, not just prayers,” she said, “but we are still prone to radicalization.” 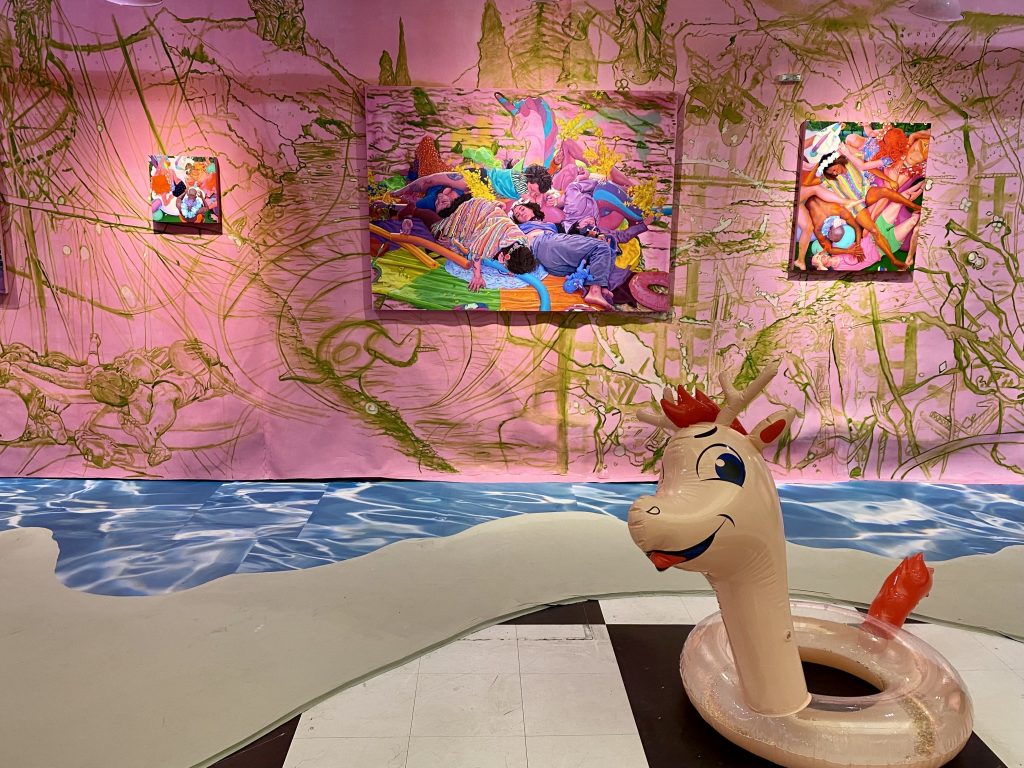 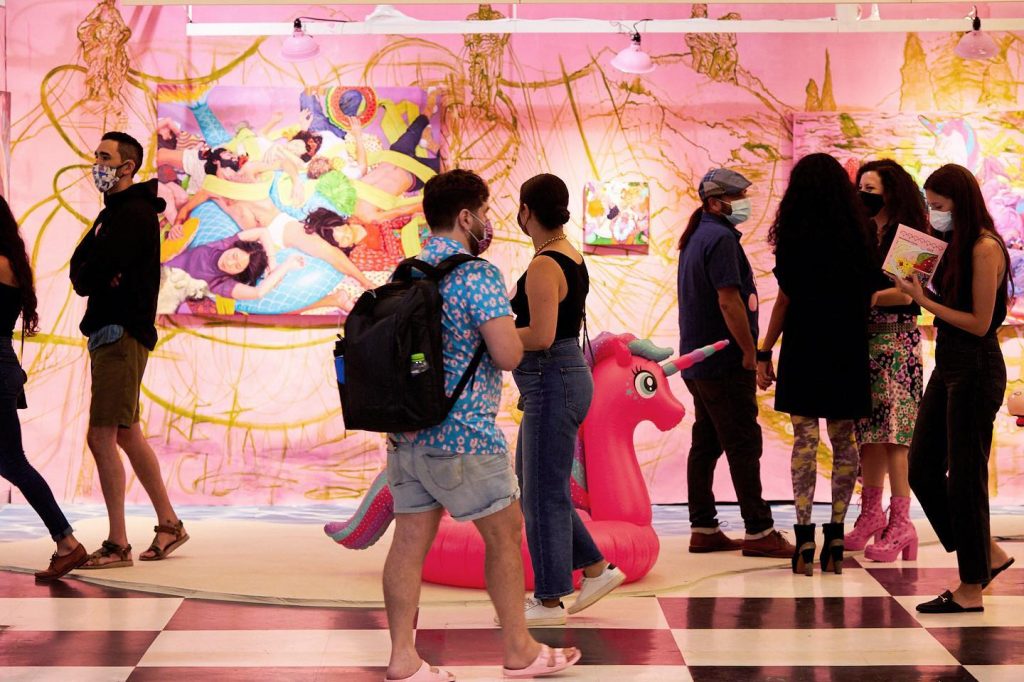 The warm pink tones of Buket Savci’s paintings of entangled bodies sprawling on unicorn pool floats evoke two readings: friends luxuriating in each other’s company, but also migrants struggling to cross a large body of water (one painting especially recalls The Raft of the Medusa).

That’s why the paintings are installed with a “stream” running on the floor beneath them, with three of the cheerful inflatables featured in the works. Savci, an immigrant herself who left Turkey to escape corruption and injustice, hopes the works call to mind the struggles of the refugee crisis, while also representing hope and interpersonal connection.

“I want you to cross this river to this realm where you’re loved,” Savci told Midnight Publishing Group News. 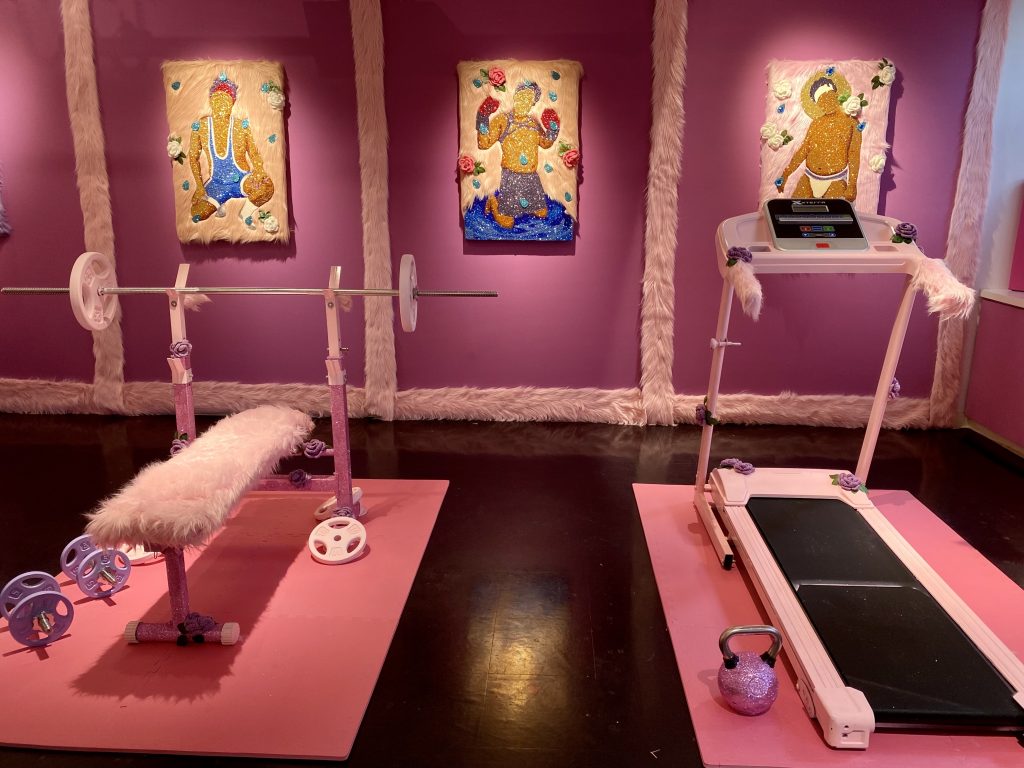 Glitter, delicate crochet, and pink fur adorn the paintings of 24-year-old, queer, non-binary artist Moises Salazar Tlatenchi, an immigrant from Mexico. Their faceless self portraits of boxers and wrestlers are displayed alongside a bench press and treadmill, both of which have been similarly adorned by the artist.

“We were thinking of the gym as a torture chamber, and recontextualizing it as a safe space for queer and trans kids,” gallery owner Gabrielle Aruta told Midnight Publishing Group News, adding that “I know a lot of artists working in glitter, but I haven’t seen anyone else who is able to capture the graduation of hue Moises achieves.” 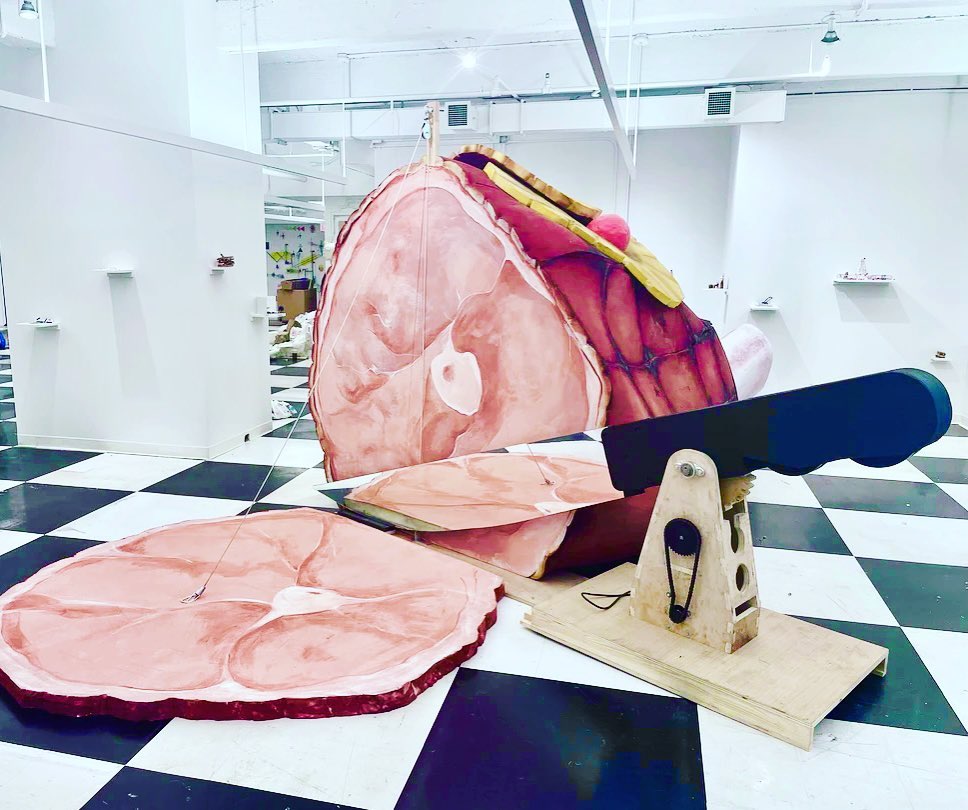 The political events of 2020 are memorialized in miniature by husband and wife artist duo Jen Catron and Paul Outlaw, who have sculpted a tiny ballot drop box, a toppled Trump monument, and the aftermath of the January 6 storming of the capitol, replete with Nancy Pelosi’s stolen lectern and Jake “QAnon Shaman” Angeli’s headdress, among other vignettes.

But these tiny scenes are dwarfed by an absurdist ham plastered with pineapple slices and maraschino cherries, sliced over and over again by a giant mechanical knife. The dramatic shift in size reflects the incomprehensibility of the 24 hour news cycle and all its conspiracies and tragedies.

“This notion of macro and micro and the idea of extreme scale is something they want to explore,” curator Magda Sawon, of New York’s Postmasters Gallery, told Midnight Publishing Group News.

“The Castle of the Spider’s Web”
curated by Deep Space Gallery, Jersey City 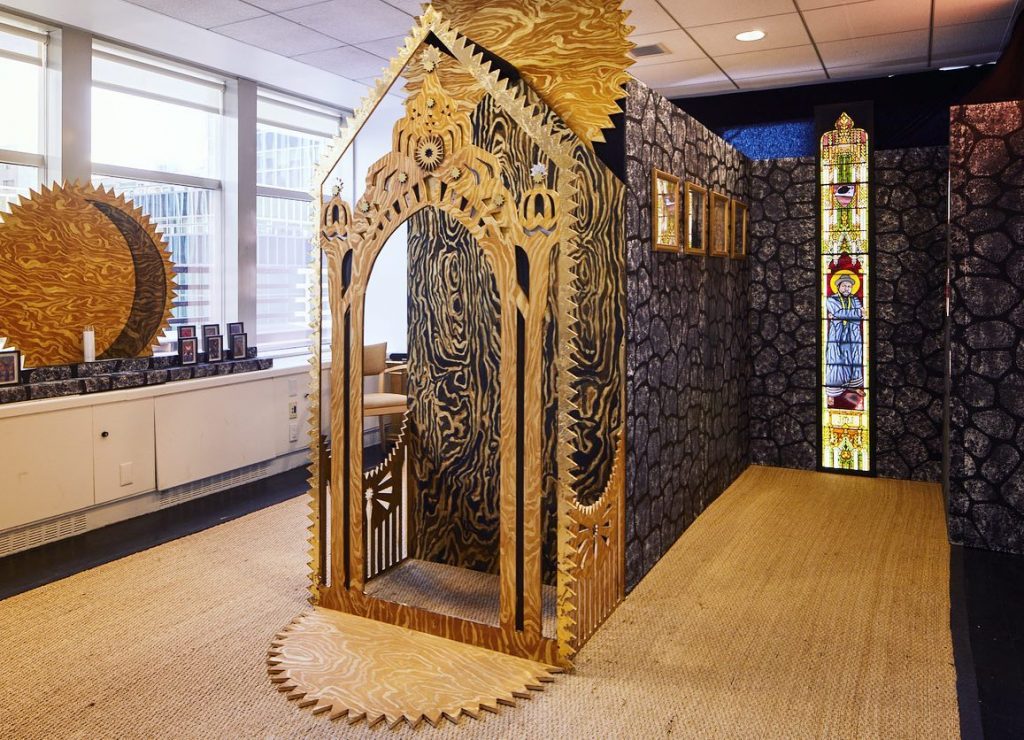 The back room of Deep Space Gallery’s two-part booth channels some serious Medieval energy, welcoming visitors with an elaborate golden altarpiece that doubles as the perfect frame for your art fair photo op.

Deming King Harriman made the installation for the occasion to accompany her pandemic-inspired “Isolation Art: Masks” series of Old Master-style portraits with subjects clad in ornate ruffled collars, metal armor, and various face coverings that evoke both the Black Death and our 21st century plague.

The digital collage prints ($350 each) are paired with stained glass windows by T.F. Dutchman (given name Keith VanPelt), who runs the gallery with romantic partner Jenna Geiger and has been working in the unusual medium for some 20 years.

“He does hip hop and skateboarding iconography in stained glass,” Geiger told Midnight Publishing Group News. The showstopper, Jam Master Jay (2009), is inspired by a series of windows the legendary designer Louis Comfort Tiffany (2009) made in Pittsburgh and is priced at $30,000.

“Out of the Blue, Things Happen to You: The Estate of Matthew Freedman”
curated by Jude Tallichet 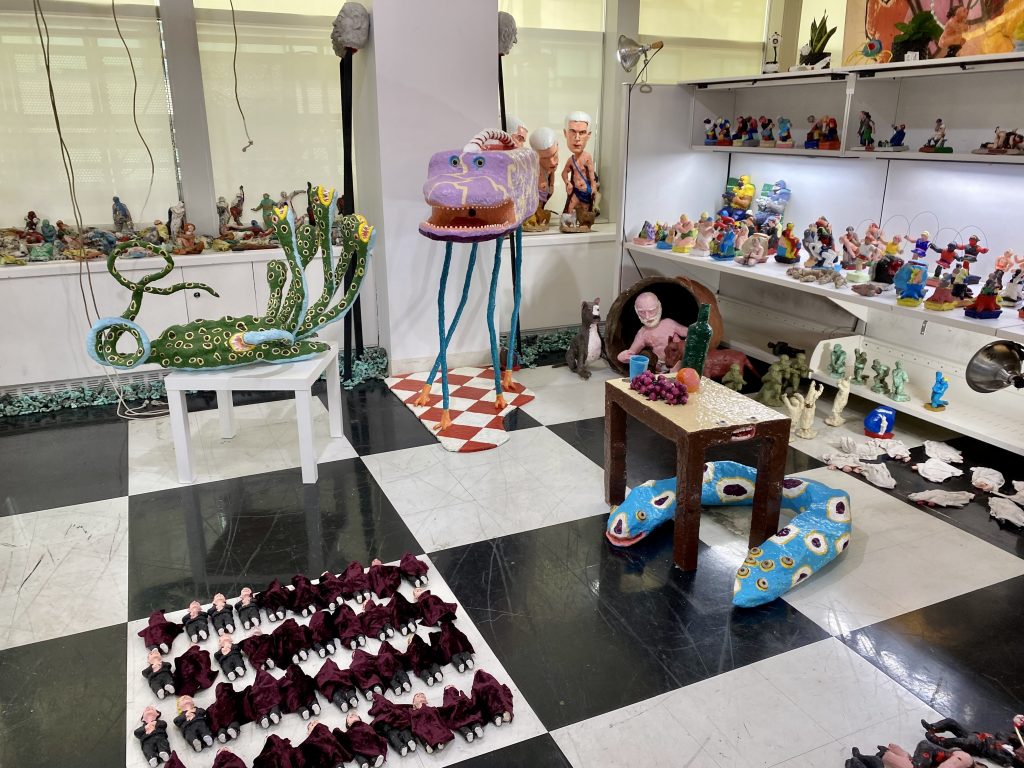 “Out of the Blue, Things Happen to You: The Estate of Matthew Freedman” curated by Jude Tallichet at Spring/Break Art Show. Photo by Sarah Cascone. 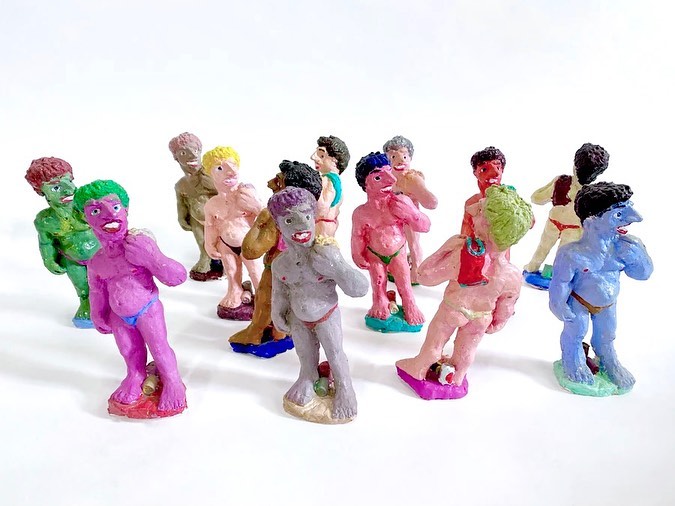 When her husband Matthew Freedman died in October at age 63 after a long battle with cancer, sculptor Jude Tallichet wasn’t sure what to do with the hundreds upon hundreds of sculptures he had made over the decades in their home, a former synagogue in Ridgewood, Queens.

“I didn’t want the work to just go into a landfill,” Tallichet told Midnight Publishing Group News. “It would be so great if it could live with people.”

With that goal in mind, she estimates she has brought about 60 percent of his sculptures to the fair. The result is an overwhelming display full of charm and character, with armies of tiny figures that seem poised to come to life in a claymation film spread across a large cubicle, covering the desks, the shelves, the window sill, and the floor.

Freedman returned to many of the same funny little characters over and over. It would be a shame to break up his impressive body of work, which almost certainly benefits from being seen en masse. (A museum show examining the artist would be fascinating.) Prices range from $150 for the small sculptures to $5,500 for a large piece of a seven-headed hydra.

“Working Title: The Birth of a New Eden”
curated by Andrea Zlotowicz 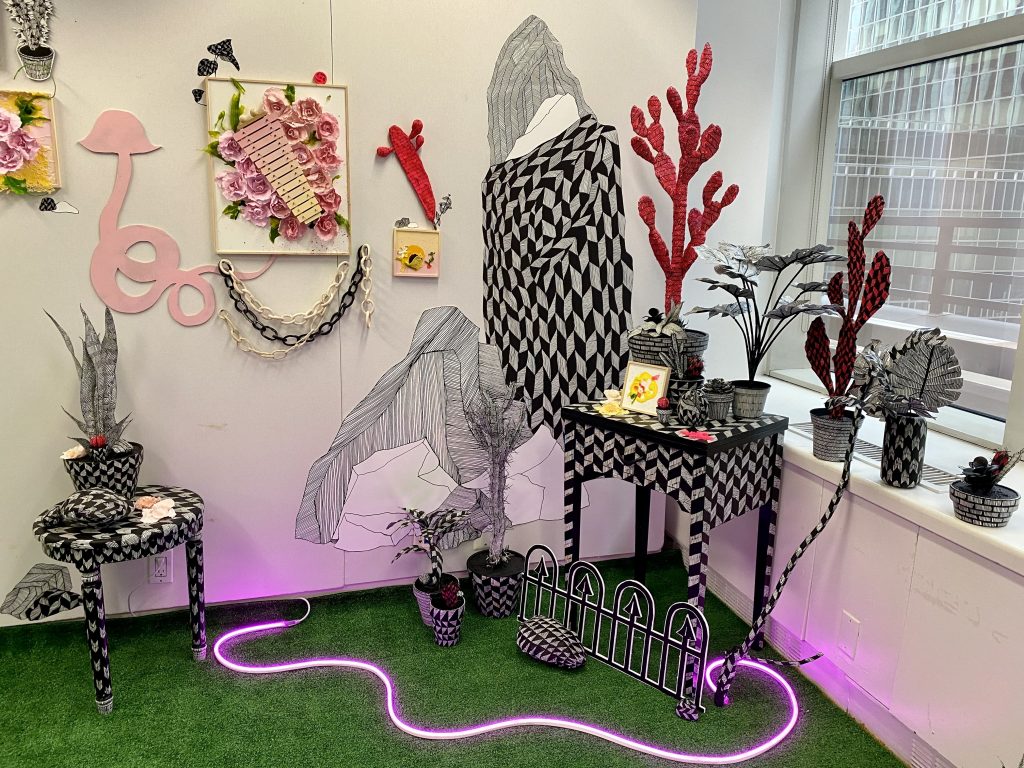 “Working Title: The Birth of a New Eden” with work by Anne Muntges and Kate Bae, curated by Andrea Zlotowicz at Spring/Break Art Show. Photo by Sarah Cascone.

The black and white works of Anne Muntges shine at not one but two booths at Spring/Break, including a full wall installation of a graffitied Brooklyn street in “Devotion,” a three-artist presentation she shares with Bethany Krull and Ani Hoover, curated by Buffalo gallery the Raft of Sanity.

The effect of Muntges’s obsessive mark-making is especially delightful, however, paired with Kate Bae’s colorful wall sculptures, which feature playable xylophones and delicate fake flowers whose petals are made from peeled layers of acrylic paint.

“The works were definitely separate, but Kate and Anne worked together to create the space and create a garden of Eden,” curator Andrea Zlotowicz told Midnight Publishing Group News. 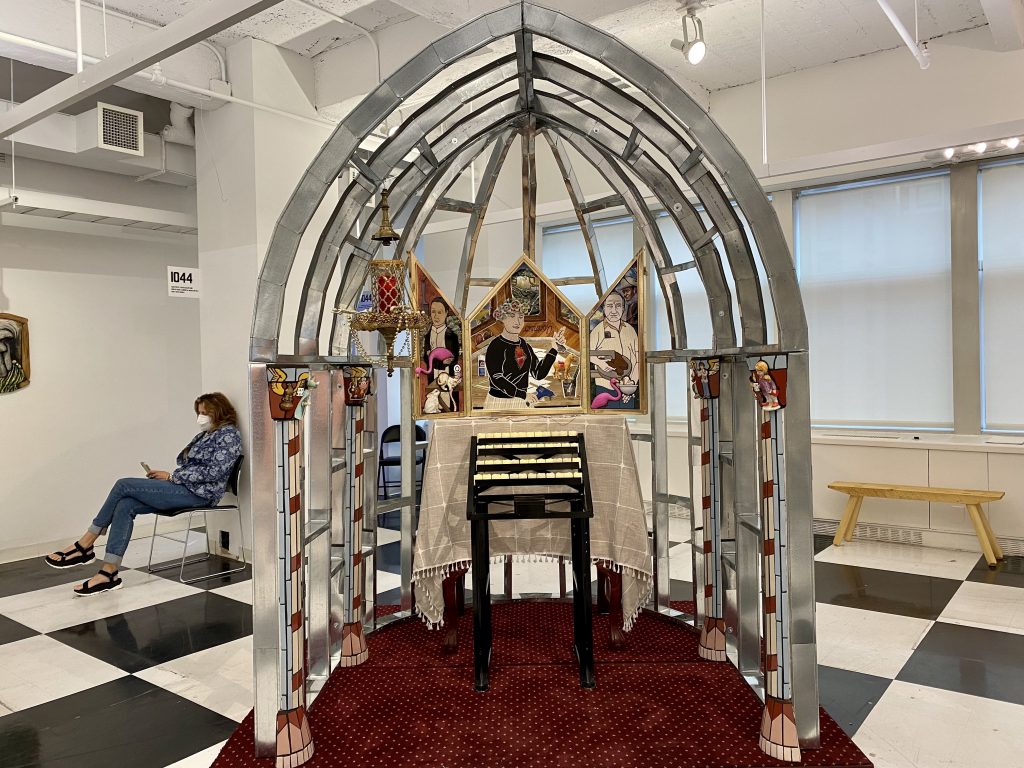 Joe Bochynski has built a full on Gothic chapel at the fair, with a mosaic triptych honoring his Polish immigrant grandparents and their Catholic faith. Adding to the installation is a display of mosaic roundels arranged to mimic a rose window.

“He collects all these found objects, like kitschy figurines, and adds them to his work,” curator John Witty told Midnight Publishing Group News. “I see it as modern-day spolia“—the ancient practice of reusing old buildings in new monuments.

“Lujan Perez: Where are you from, from?”
curated by Anne-Laure Lemaitre 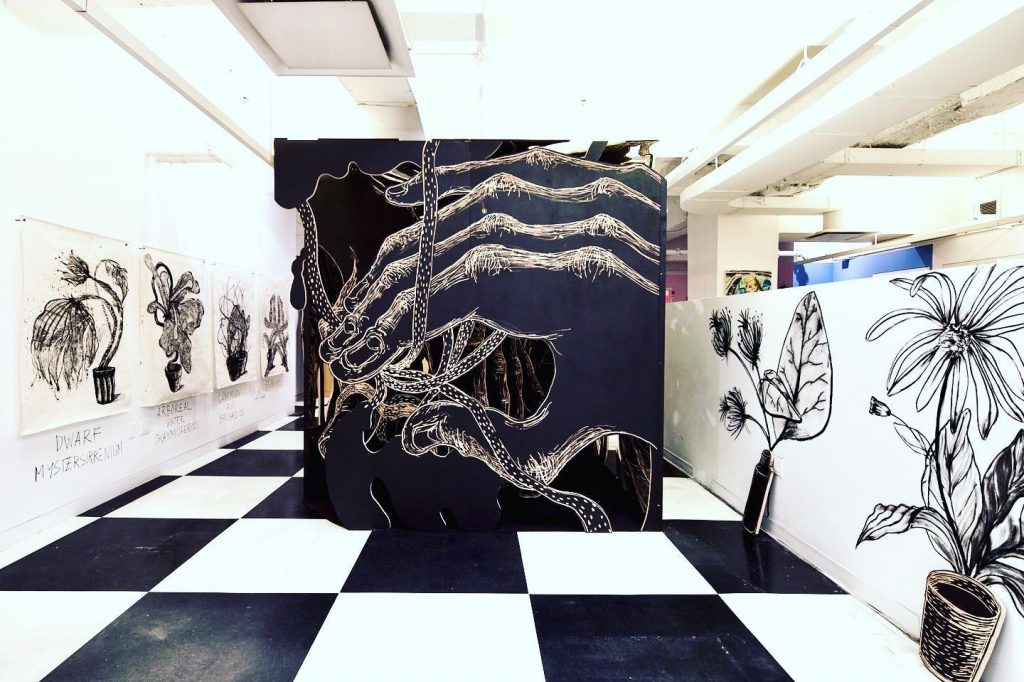 Lujan Perez was inspired to make her drawings of imagined toxic plants by internet research she conducted in March 2020, when she fell ill during the first wave of the pandemic. When she learned the yellow oleander, a common garden plant, can cause similar shortness of breath to the virus, she became fascinated by the looming dangers of the natural world.

“There are things that are very familiar that if ingested make you very sick,” Perez told Midnight Publishing Group News.

The works on paper are accompanied by a large-scale hand-carved wooden installation that you can climb inside, transporting yourself to a dark, vaguely ominous forest.