Sandro Botticelli’s ‘Primavera’ Is a Mysterious Celebration of Spring. Here Are 4 Things You May Not Know About This Marvel


Spring is the most eagerly awaited season. After the short days and long nights of winter, we watch carefully for the small signs—a green shoot nosing up from under snow, the added minute to a cold day—that the season of rebirth is on its way. The season’s rich symbolism and beauty has made it a favorite subject of artists across history.

Sandro Botticelli’s Primavera is one of art history’s most famous and elusive allegories of the season. In the painting, nine mythological figures appear in an orange grove (a reference to the Medicis). All around them, hundreds of varieties of plants blossom. The picture has myriad references to classical and Renaissance poetry and literature (Ovid, Lucretius, and others), but is borne of no one particular story.

It’s unknown when Botticelli made the painting (although scholars agree it was the 1470s or early 1480s), nor why exactly he did. Many believe it was commissioned by Medicis as a gift on the occasion of the 1482 wedding of Lorenzo di Pierfrancesco de’ Medici and Semiramide Appiano. (Though they married in July, the nuptial was originally scheduled for May, making spring an appropriate subject matter). Even the painting’s name, “Spring,” was not Botticelli’s idea: it was given to the work by Giorgio Vasari when he saw it some 70 years after it was created.

A jewel in the collection of the Uffizi Gallery in Florence, this bursting depiction of spring flora is among the most adored and speculated upon paintings of the Renaissance. Still, it remains full of fascinating surprises… . 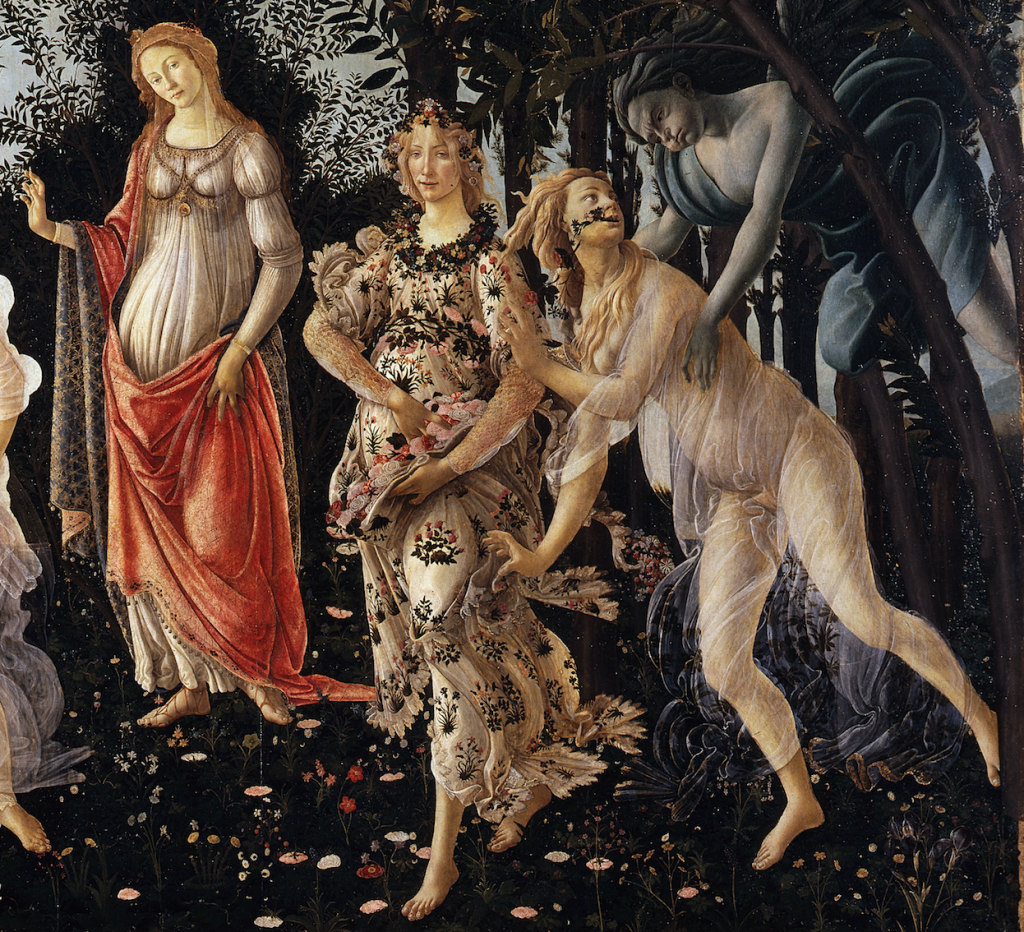 Much of the conversation around Primavera has rightfully centered on distinguishing and identifying the scenes’ mythological figures. The painting, which measures a sizable 80 by 124 inches, is intended to be read from right to left.

The generally accepted reading is as follows: the blue figure of Zephyrus, the cold wind of March on the right, clasps the nymph Chloris, whom he will kidnap. Zephyrus will later marry Chloris and she will be transformed into Flora, the goddess of spring. Botticelli has signaled this transformation by overlapping the figure of Chloris and that of Flora, who appears as the third figure from right, elegantly scattering flowers. At roughly center and slightly to the back of the composition is a figure widely agreed to be Venus, in a dress of gray-blue and a red shawl. Above Venus is her companion, Cupid, blindfolded, with his arrow aimed. 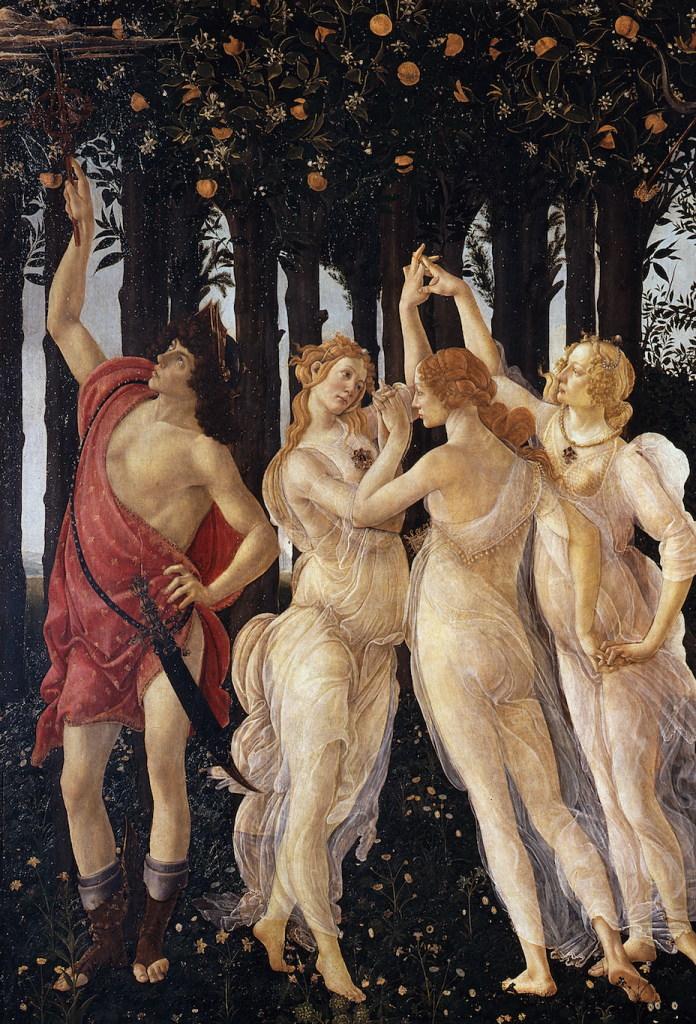 Three Graces appear next in diaphanous, transparent white dresses. At the far left appears the god Mercury. Many have interpreted the sequence of these mythological figures to suggest the progression of the season, with Zephyrus of March, followed by Venus, the goddess of April, and Mercury, the god of May, raising his caduceus towards wisps of clouds to disband the final bursts of cold as summer prepares to take the stage.

Flemish Tapestries Were a Clear Inspiration 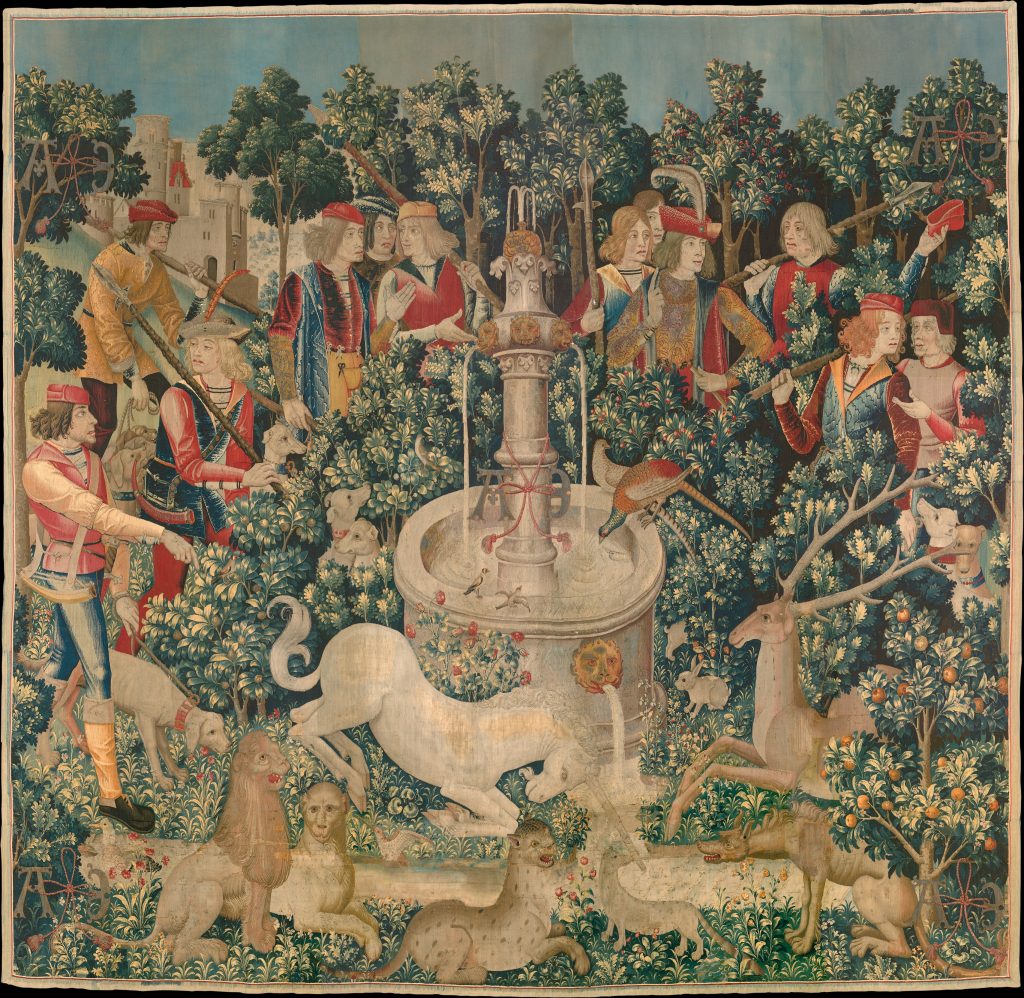 A classic Flemish millefleur tapestry, The Triumph of Death, or the Three Fates (circa 1510–20).

While Primavera may today be considered the epitome of Quattrocento art, the painting actually embraces compositional approaches from earlier Gothic styles, rather than the mastery of perspective and space exalted in artworks of the Renaissance era (and which Botticelli was quite able to accomplish).

A whopping 500 plant species are said to have been depicted in the painting, with about nearly 200 different flowers of which 130 have been specifically identified. This botanical abundance, and its scattered, almost wallpaper-like rendering, has a striking precedent in millefleur (or “thousand flower”) Flemish tapestries, which were common in many palaces of Botticelli’s  age.

Tapestries of the 15th and 16th centuries continued to utilize earlier Gothic compositional arrangements, which Botticelli here embraced, arranging the mythological figures not with any real-world sense of spatial relation, by “set side-by-side like pearls on a string,” as the art historian Helen Ettlinger wrote, and with the background of the forest acting as a kind of theatrical curtain that closes the space.

The Medicis had business ties to the Netherlands and had commissioned a number of Flemish tapestries for their homes in Florence. What’s more, we know that Primavera was intended to hang above a lettuccio, a high-backed cabinet, over which tapestries were often displayed, in a kind of clever visual twist.

Primavera Is Metaphor for Metamorphosis 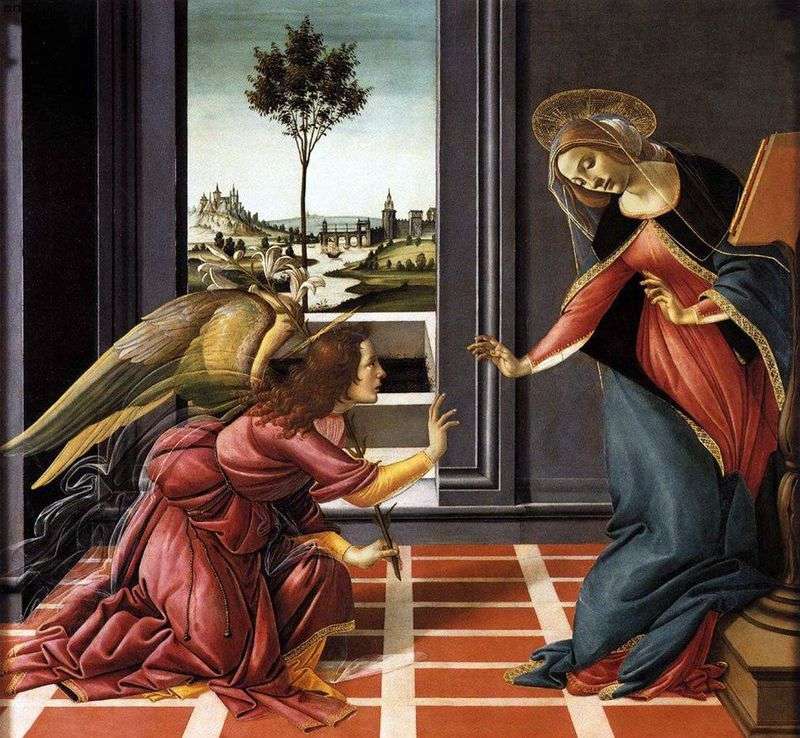 Primavera has been said to embody the classical 3rd-century Neoplatonic philosophies and writings that the Medicis embraced and popularized in their own age. In Renaissance Italy, Neoplatonic artists and thinkers sought to synthesize or draw parallels between the beliefs of classical antiquity and Christianity. Venus, for instance, was considered the classical embodiment of both earthly and divine love, and therefore a precursor or parallel to the Virgin Mary. 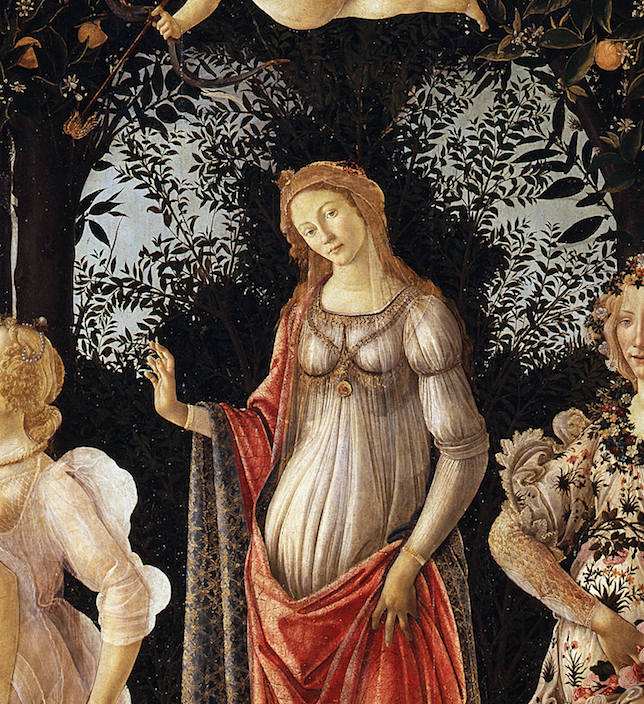 Botticelli makes these allusions subtly in his depiction of Venus. The bend of the tree branches behind the figure form a kind of halo, and her belly swells in what some had considered a depiction of pregnancy. Moreover, Venus raises her hand in a gesture of recognition and invitation that mirrors Mary’s gestures to the angel Gabriel in contemporaneous Annunciation scenes, including Botticelli’s Cestello Annunciation of 1481. 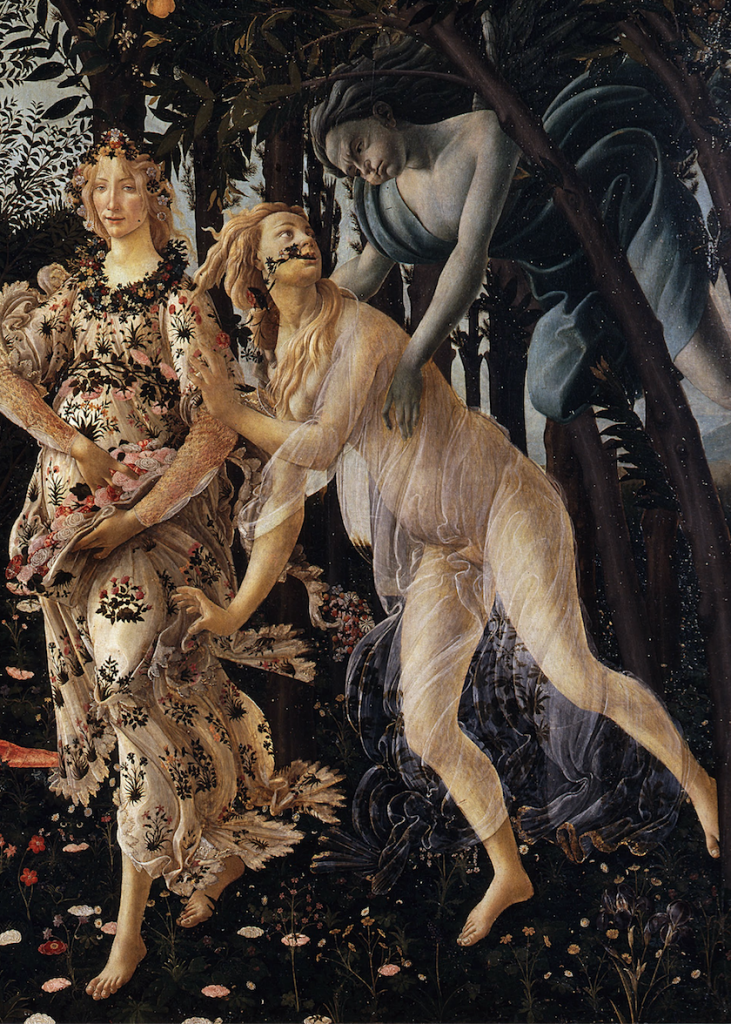 “Botticelli suggests the gradual process of metamorphosis through time,” art historian Paul Barolsky noted in his essay, “Botticelli’s ‘Primavera’ as an Allegory of its Own Creation.” The artist accomplishes this, for example, “by first showing the silhouettes of flowers through the veil of Chloris’s dress, only faintly suggesting the form that these flowers will take when they eventually adorn Flora’s dress,” and in numerous clever visual puns scattered throughout the painting. 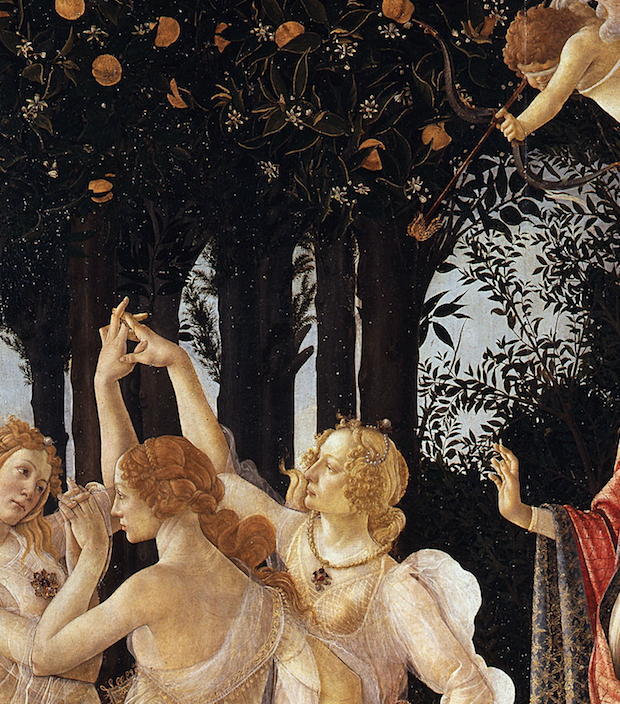 Cupid’s arrow provides an important clue to understanding the painting: the arrowhead points at the central figure of the Three Graces, believed to be Chastity, who turns her head away, outward, toward the left of the canvas. Some have argued that Chastity is turning her gaze toward the figure of Mercury, here offering an alternate couple to that of Chloris and Zephyrus on the other side of the painting.

Yet many scholars believe the Chasity is instead turning her gaze away from the scene and outward to what is believed to be the companion painting to Primavera—Botticelli’s Pallas and the Centaur (1482)—which was most certainly given as a wedding gift to Lorenzo de’ Pierfrancesco and his bride. 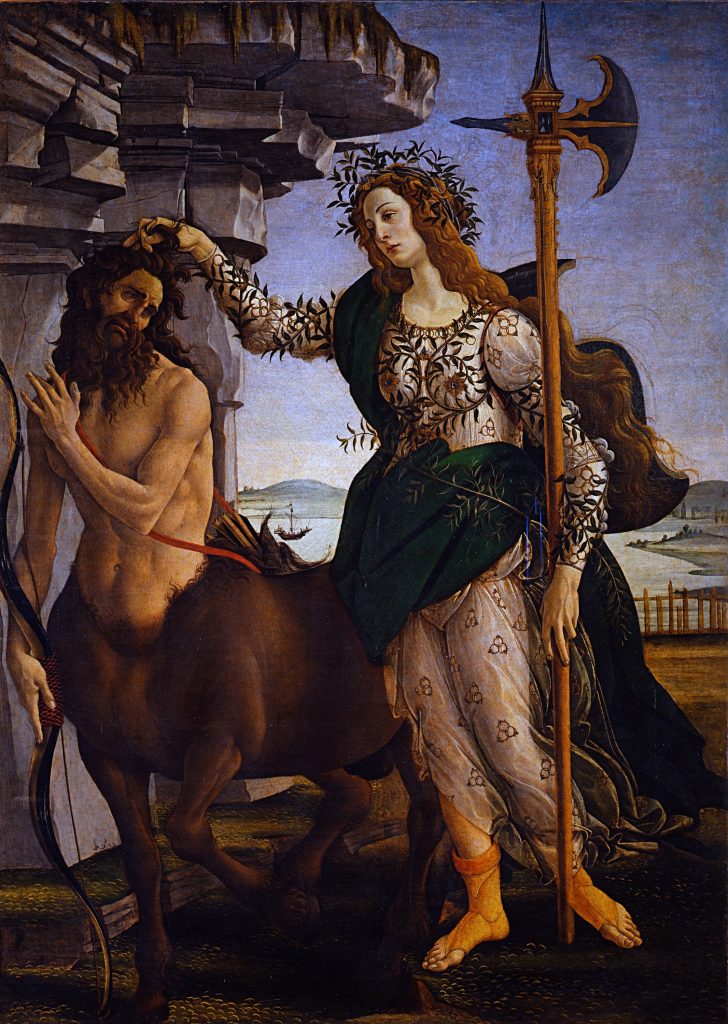 Sandro Botticelli, Pallas and the Centaur (1482). Courtesy of Wikimedia.

As with Primavera, Pallas and the Centaur brims with allusions to the Medicis. Pallas’s dress is decorated with the three-ring insignia of the family. Importantly, the painting is usually interpreted as depicting Pallas Athena, goddess of wisdom and trade, subduing a centaur, the embodiment of unbridled passion—in other words, reason subdues lust, offering a more concrete alternative to the violent image of Chloris’s abduction in Primavera.

As a marriage gift, the paintings would have been an allegory of sorts for the bride, and both paintings were known to have hung in the room adjacent to the couple’s nuptial bedroom. As Lilian Zirpolo noted in her essay, “Botticelli’s ‘Primavera’: A Lesson for the Bride,” the paintings work together in supplying the bride “with lessons on chastity, submission, and procreation… Cupid points his arrow at one of the Graces, just as Lorenzo de Pierfrancesco’s bride relinquished her virginity upon entering her husband’s bedroom for the first time.”

In that reading, Primavera is much more than simply an intellectual vision of various poetic and literary references. It’s also a practical guide for an upper-class Renaissance woman on the expectations society, and her new husband, had of her.