Art Industry News is a daily digest of the most consequential developments coming out of the art world and art market. Here’s what you need to know on this Thursday, February 11.

Philanthropist to Donate $5 Million to Help Diversify Museums  – The Indian human rights activist and gallerist Amar Singh has pledged to donate $5 million in artworks by women, LGBTQ+, and minority artists before 2025. “Museums are safe-keepers of culture and humanity,” Singh said of the commitment. “But the reality is that they have historically failed us. They have not represented humanity across the board.” The philanthropist has already donated a six-figure painting by Maria Berrio to LACMA, and a portrait of the US Inauguration poet Amanda Gorman by Raphael Adjetey Adjei Mayne to Harvard. (Vanity Fair)

Grantmaker Pulls $2 Million Grant From Poland’s “LGBT-Free Zone” – Norway Grants has pulled €1.65 million ($2 million) in European heritage funding from the Polish region of Podkarpackie after local councilors voted for a resolution to “resist the promotion of LGBT ideology.” The resolution conflicts with the grant’s founding principles of respect for all human rights. The grant was officially withdrawn last year but is just now coming to light. (The Art Newspaper)

Oaxaca Museum Staff In Standoff With Governing Foundation – A foundation that supports the Museo de Arte Contemporaneo in Oaxaca, Mexico, is caught in a terse standoff with museum employees. The museum’s director, Cecilia Mingüer, says that Los Amigos del MACO has not paid staff salaries for 10 months, and is vying to shut the institution down. In protest, Mingüer has been locking herself into the building at night. (TAN)

Greek Police Get a Lead on a Stolen Picasso – A new investigation has led Greek authorities to believe that Picasso’s 1939 Head of a Woman, which was taken from Athens’s National Gallery in 2012, may still be in the country. Police believe the stolen work was offered for $20 million on the country’s illicit market, but that it never found a buyer because of its high profile. Authorities hope to see the work returned before the reopening of the National Gallery in March. (ARTnews)

Ali Banisadr Joins Victoria Miro – Victoria Miro has added the Brooklyn-based painter Ali Banisadr to its roster, and will hold his first solo exhibition in 2022. Thaddaeus Ropac gallery and Kasmin Gallery will continue to co-represent the artist. (Press release)

Orlando Museum Names New Executive Director — The museum has hired Aaron De Groft, formerly head of the Muscarelle Museum of Art at the College of William & Mary, as its new CEO and director. De Groft will replace Glen Gentele, who left the museum last February amid a clash with the board. (Orlando Sentinel)

Asian Art Museum Returns Looted Objects – San Francisco’s Asian Art Museum will return two ancient temple lintels to Thailand. The museum removed the religious relics from view after they were alerted by US authorities in 2017 that they might have been illegally exported from Thailand. They have now forfeited the objects to the government, which will work with Thai authorities to repatriate them. (Courthouse News)

An Ancient Musical Conch Is Played Once Again – Experts have discovered that an 18,000-year-old conch in Toulouse’s Natural History Museum was actually an ancient wind instrument that could have been used for ceremonial purposes. The vessel was originally archived as a cup, but after re-examination, experts found it to have been partially hand crafted and painted, and brought in a professional horn player to give it life once more. (Smithsonian)

Google Wants You to Hear Colors – A new Google Arts & Culture project called “Play a Kandinsky” explores Kandinsky’s synaesthesia by imagining what the artist might have heard when he looked at color. Based on Kandinsky’s own writings , the interactive tool lets you experience the sounds of his 1925 work Yellow Red Blue by clicking into different parts of the painting. (CNET)

See Inside Buontalenti’s Grotto in Florence – You can now explore the Italian Renaissance architect Buontalenti’s grotto and its breathtaking Tuscan Mannerist sculptures at the Uffizi Galleries in Florence online. The site has been digitized in high-definition 3D, and visitors can walk around inside using their cell phones or computers. (Press release) 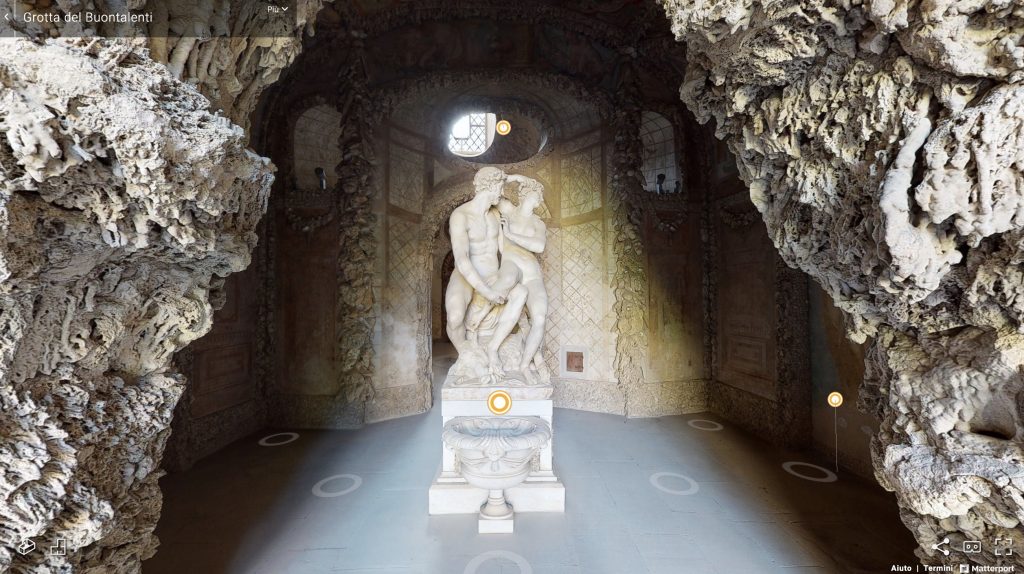 The Grotta Buontalenti in 3D. Image courtesy the Uffizi Galleries.