The worst fires in decades have been ripping across southern parts of Europe, threatening lives, homes, and putting several ancient cultural sites at risks.

It’s summer vacation season in Europe, which means that masses of tourists from the North are peppered around the mediterranean, after borders were largely opened up in recent months following a winter and spring of lockdown. But early August has seen record-breaking temperatures, with the mercury reaching a scorching 47 Celsius (116 Fahrenheit) in parts of Greece this week, and causing numerous fires to break out.

Since Wednesday, hundreds of firefighters have been beating back deadly fires just outside the historic capital of Athens. The Acropolis and other ancient archaeological sites remained closed this week due to high temperatures, and many are now shrouded in smoke from the nearby fires.

Meanwhile, popular holiday destinations in Turkey, Italy, and Spain have also seen regions engulfed in fast-moving fires as the heatwave bakes on. Emergency service workers have been desperately trying to bring the dangerous blazes under control using water planes and helicopters. 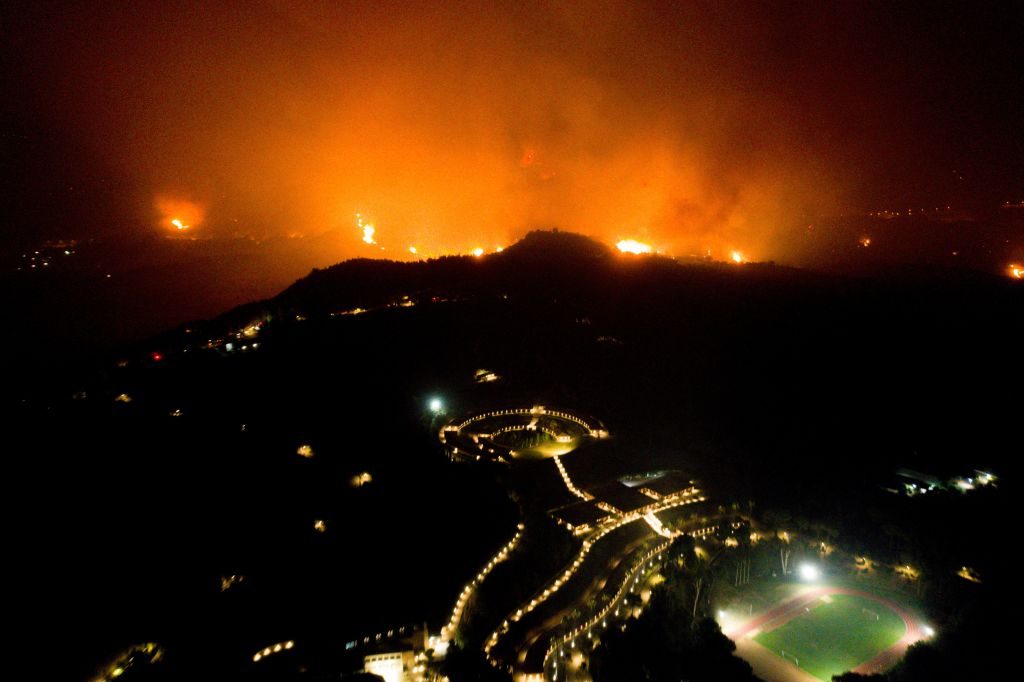 A wildfire approaches the Olympic Academy in ancient Olympia in western Greece on August 4, 2021. Photo: Eurokinissi/AFP via Getty Images.

While the Olympic games continue to hand out medals in Tokyo, flames are burning dangerously near to its birthplace of Olympia, where hundreds of firefighters are working to evacuate locals, salvage homes and businesses, and to protect the world-famous site that dates back to 776 B.C., and where the games were held for more than a thousand years.

Culture minister Lina Mendoni assured media on Wednesday, August 3, that the fires near Olympia, which is now an archaeological site and museum, were coming under control. “Everything that can be done to protect from the flames […]  has been done,” she told the press.

Artifacts of key historic and artistic value were removed from the Tatoi palace, a former royal residence, as a precaution, although the site remains unharmed as of this writing. In another part of Greece, fires threatened the 14th century Monastery of St. David the Elder and Drymonas, near Kalamoudi. Several monks refused to leave despite pleas from authorities. So far, no deaths have been reported in Greece.

The neighboring country of Turkey was not in a better place in the early hours of Thursday, August 5. Fires raging in the south-western part of the nation have so far killed eight people, and forced hundreds of people to flee their homes. So far, the Turkish government, which did not sign on to the Paris Climate Agreement, has been mute on whether climate change was a cause of the flames, and its President, Recep Tayyip Erdoğan, is facing criticism for the lack of help and resources being offered to local communities.

Elsewhere, this summer’s extreme weather is also threatening parts of Albania and high temperature warnings have been issued in North Macedonia, Bulgaria, and regions of Romania and Serbia. Earlier this summer, Germany was caught unprepared for devastating floods, which killed 177 people.