Painter Tschabalala Self Wants to Keep Her Life Separate From Her Work. Will the Art World Let Her?


For as long as women have been making art in the public domain, (often male) critics and curators have looked to their work to offer some great revelation about their personhood—their mental health or their beauty or their niceness or their rudeness. Yayoi Kusama’s art is “driven by her inner experiences” and “visual hallucinations.” Alice Neel is “brimming with politically charged empathy.”

These artists’ gifts, the narrative goes, come from a place deep within, inextricable from their character or spirit. Helen Frankenthaler’s biographer Alexander Nemerov once wrote that appreciation of the artist’s work required him to “abandon his expertise.”

This is not to say that female artists—particularly those, like Frankenthaler, who had money and whiteness and virtually every privilege at their disposal—have not enjoyed robust careers or scholarship. But it has been nearly impossible to prevent the bleeding of their lives into their work—whispers about how daring or rebellious this one was, or how everything that one made comprised an act of resistance. 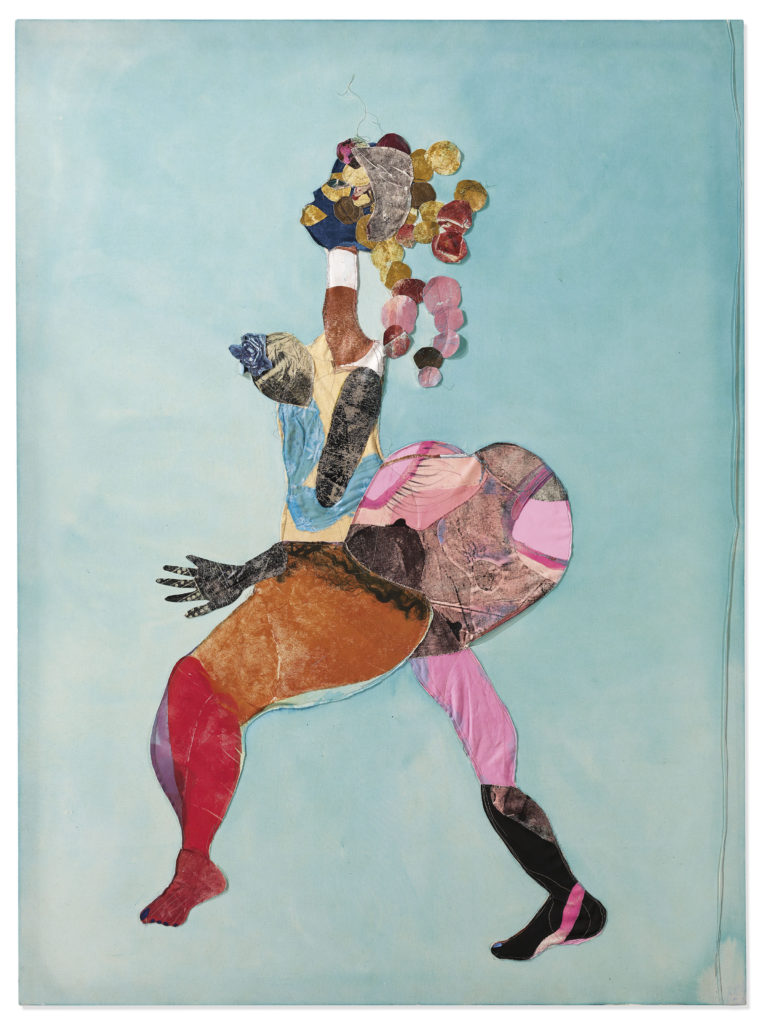 If ever there were an artist working today who understands this dilemma—how revealing any real part of you can, through subsequent projection, forever inflict upon your work an irremovable stain—it is Tschabalala Self.

The 31-year-old artist has, over the past few years, become one of the most sought-after young creators in the United States. The glare of the spotlight has left her extremely deliberate about how much of herself she reveals. When we spoke about her major solo exhibition at the Baltimore Museum of Art (through September 19), she was precise and careful with her language. In conversation, she rarely goes off script and has a tendency to dive deep into historical references, careful not to betray any glimpse of the umbilical cord that tethers what she makes to the core of her.

“I actually prefer people not to know any real facts about me,” Self said earlier this summer. “It’s more interesting for them and for me, for people to just assume things and then for it to be ambiguous about whether or not it’s true.”

“Whatever they come up with I am sure will be more interesting than the truth,” she added. 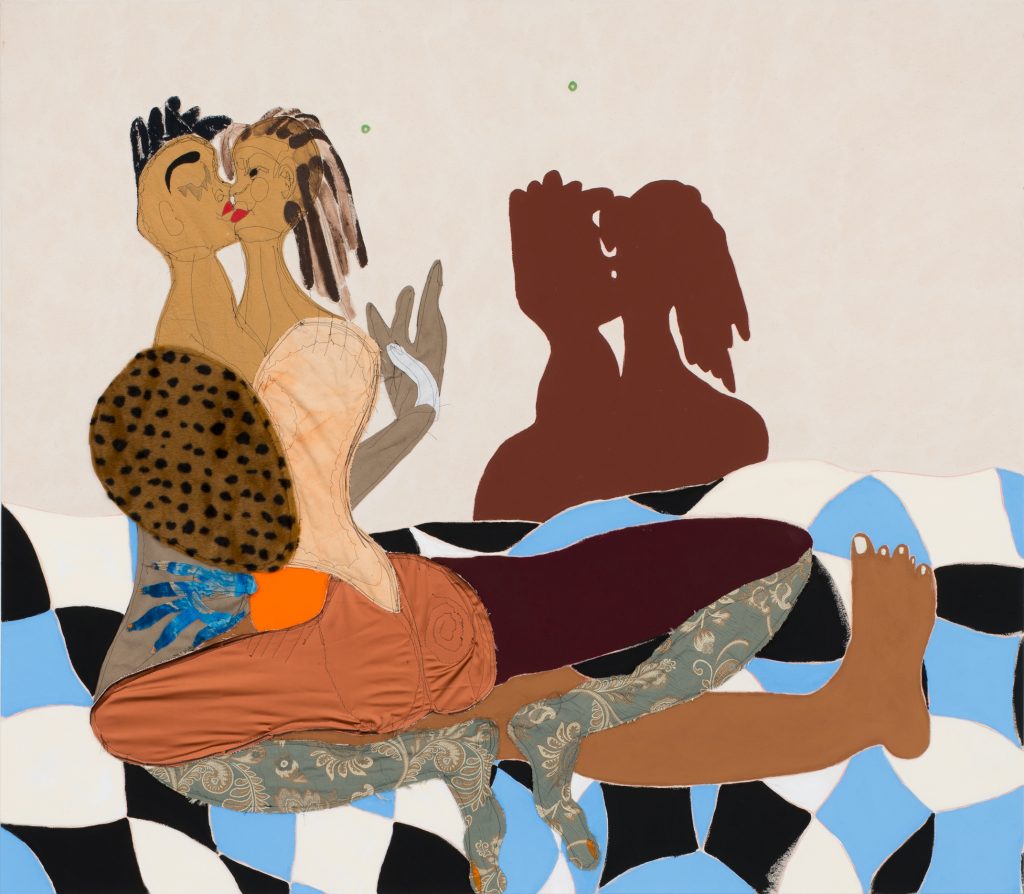 While carefully maintaining her personal boundaries, Self has spent the past year and a half pushing herself to become vulnerable within the confines of her work. For the Baltimore Museum, she created three new paintings in response to works by Matisse—an experience she called “inspiring” and one that required her to reach beyond the safety of her purview, linking her work to something external.

This fall, Self will create her first live performance, for the Performa biennial in New York. It marks her first time working with real bodies in lieu of fabric subjects. The piece—in which two actors, one male and one female, face off in a non-linear dialogue—will push her to relinquish some of the control she has so carefully cultivated.

“I want to take more risk in regards to what I’m willing to incorporate into my practice, to keep exploring my ideas and amplify them,” Self said. “Maybe I’m a little more open-minded now.”

It is no surprise that Self’s relationship to success in a predominantly white art world is fraught. She is uneasy when her works end up in the wrong homes or at auction, where collectors bid on Black bodies with wine glasses in hand. She has made her views on this abundantly clear in previous interviews.

Her market ascent began shortly after she finished graduate school at Yale in 2015, where she came away with an M.F.A in painting and printmaking after completing her undergraduate degree in studio art at Bard College.

By the time she entered the art world as a professional, eyes were already on her—she had little room to experiment privately. She signed with her gallery, Pilar Corrias, in 2017. She’s had solo shows at the Hammer Museum and the ICA Boston. Her 2019 Hammer exhibition, “Bodega Run,” which featured a series on the local bodega as a bedrock of community in Harlem, received rapturous critical acclaim.

It is easy to see why: to look at Self’s work is to be jolted by her layered figures who are, more often than not, lone Black women depicted as assemblages of hand-painted and found fabrics like blue denims, floral prints of dinner-table cloths and sundresses, and tan brown textiles that recall the color of Timberland boots. Together, they map the textures of Self’s childhood in Harlem, where she was raised by her mother and a close-knit community of women, many of whom had deeply personal relationships to style. 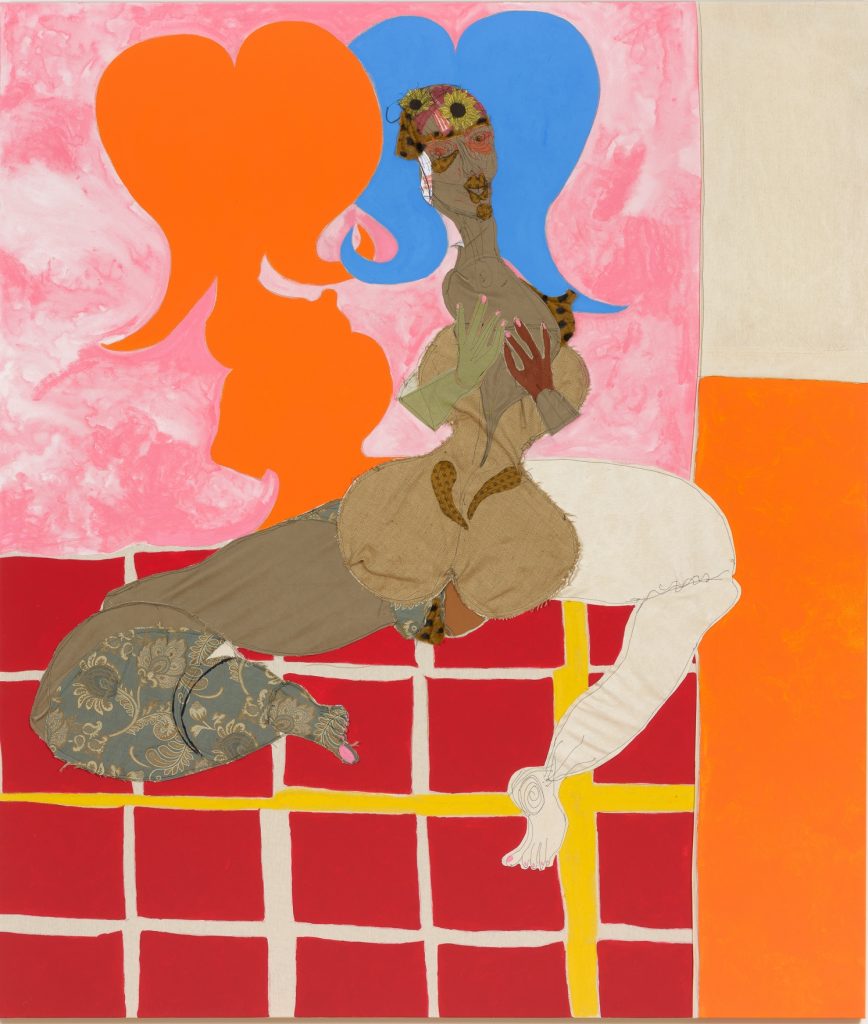 Self’s prodigious body of work has placed her among the ranks of excellent Black female artists who are at least 20 years her senior: Amy Sherald, Calida Rawles, Carrie Mae Weems, and Kara Walker among them. In the art history of the future, these women will undoubtedly be grouped together for reinventing, in remarkable ways, Black figuration for the Black community.

For everyone else—non-Black viewers—appreciation can happen, but there will always be a gulf between them and a life experience that is not theirs by birthright. Within that gulf, projection, fetishization, glorification, and appropriation can flourish. Emotion is conflated with understanding and encroaches upon an artist’s ability to present work on their own terms.

Just as Self is hyper-aware of how she as a creator may be perceived by the public, she is also conscious of what it means to have non-Black viewers take joy in her work. To admit to liking Self’s art as a non-Black person is to confront what compels you to linger before it: the winking, goddess-like energy of her figures, with their fulsome hips and thighs and breasts, their hair full of health.

Look even more closely, and you may find that the expressions of Self’s characters contrast with the energies of their bodies. They are contemplative, neutral, occasionally blank. Are you sure you are really seeing me? they seem to ask.

“I’m not very good at looking at myself in the third person,” Self said. “I can’t fully wrap my head around what other people truly think of me. I have ideas, you know… but I don’t know how accurate those are. I think that’s probably for the best because if you were to see yourself the way other people do, I would imagine that would be very toxic.” 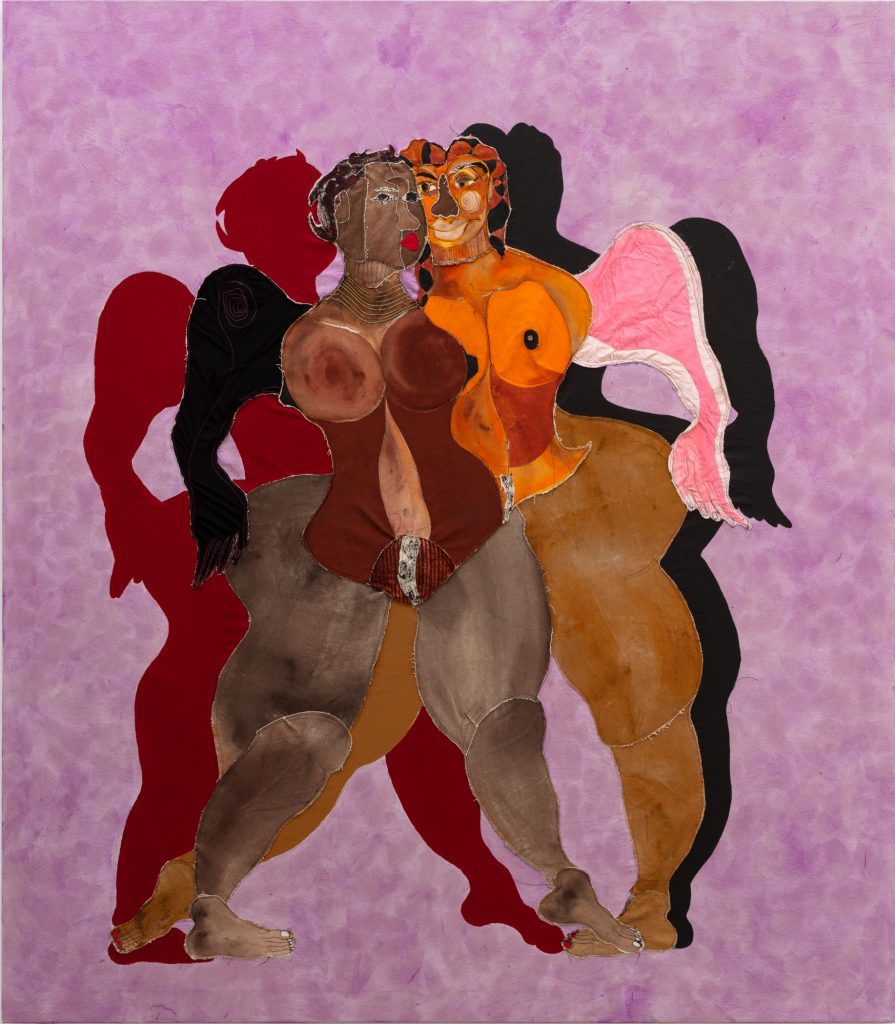 Self’s uneasy relationship with her audience should not be confused with a refusal to articulate what her work stands for. On her website, she proclaims that her pieces are “dedicated to naming” the phenomenon of how “collective fantasies surround the Black body, and have created a cultural niche in which exists our contemporary understanding of Black femininity.” Her art speaks truth to power pointedly and publicly—but that doesn’t mean she has to do the same as Self, the person.

When Self and I talk about how Black women artists are fetishized and how this might be prevented, she becomes a little less vague. “As an artist I believe you can take the reigns and assert some level of agency in the scenario if you choose to,” she said. “One must create boundaries and control their narrative. You do not have to concede and be complicit with that narrative that is projected onto you, you know what I mean?”

She is also wary of cultivating a kind of art-star persona that might make her less accountable for her actions. “If you think about how people talk about artists in films and biopics, they’re often depicted as these mythic figures,” she said. “All their sins are overlooked, all their bad deeds are explained away because they’ve become so godlike.”

In an interview I conducted last year with Self and her partner Mike Mosby, a curator and DJ, Mosby described Self as “not really” a social person. She is selective about art events she attends and with whom, usually sticking to a tight-knit group of artist friends.

Over the course of 2020, Self made daily pilgrimages from the home she shares with Mosby in Hudson, New York, to her studio in New Haven, stopping for breakfasts at Barbara’s (one fried egg, bacon, and two pancakes) and pizza at Brick Oven. She thought often about loneliness, and the loneliness of her figures.

Perhaps it is fitting, then, that her two latest projects—the Baltimore show and the Performa performance—put her once solitary bodies in groups or couples. 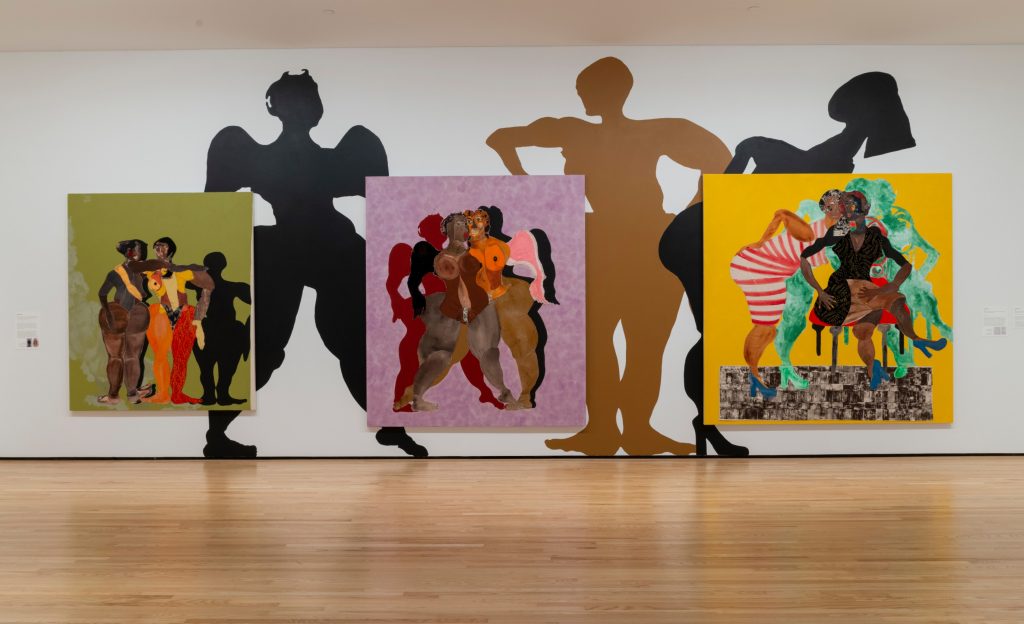 The inspiration for the Baltimore show came out of research Self conducted into the museum’s large Matisse collection. She came upon on a rare sculpture, originally titled Two Negresses, that portrays Black women embracing one another.

Self created three paintings to play off Matisse’s work, which was specifically intended for the white male gaze. Her figures, kinetic and bodacious women portrayed in bright colors and various textures, seem to challenge Matisse’s to a sort of contest of the spirit. They are also a celebration of the fact that Black women can now be depicted in the halls of museums by artists who look like them. 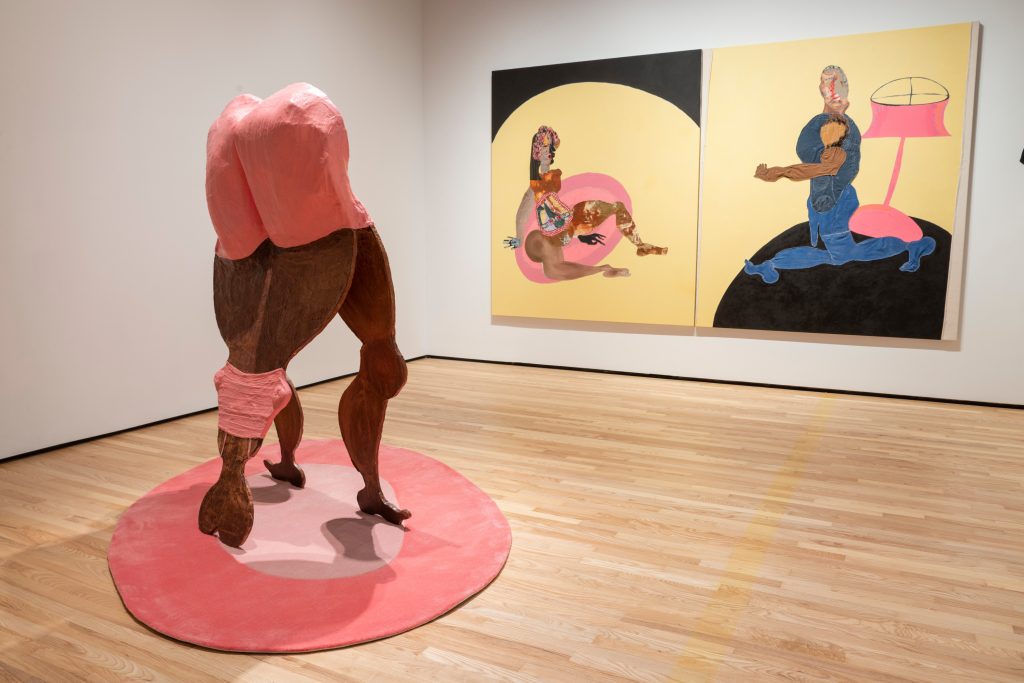 Self is still ambivalent about how much of herself to show to the world beyond her work. In lieu of performing in the Performa commission herself, she opted to hire actors. But after spending a year disconnected from most people, she is newly inspired to explore connection.

“I think one positive thing that’s come out of this chaotic time—2020 to me was the straw that broke the camel’s back after several chaotic years—is that I’m more open to doing things I wouldn’t have considered doing otherwise,” she said. “Why not? Everything else that’s happened has happened. You might not ever get the chance to do these things ever again.”