When an artist still in her first year of graduate school has a solo show in a New York City gallery, it’s a reason to pay attention. And when that exhibition is an instant sell out, mostly to institutional buyers, as was the case with Gio Swaby’s debut at Harlem’s Claire Oliver Gallery, you can bet people will start to take notice.

Swaby, 29, hails from the Bahamas but currently lives in Toronto, where she relocated last fall to pursue an MFA at the Ontario College of Art & Design University. But unlike most art students, she had already secured gallery representation, thanks to a timely Instagram introduction to Oliver from curator Danielle Krysa.

About a year later, her debut with the gallery is a smash hit—but Swaby and Oliver still haven’t met.

“I haven’t been able to visit the gallery,” Swaby told Midnight Publishing Group News. “I haven’t seen my show in person. Although it feels like I’ve known Claire for a million years.”

“It was almost like a long-distance love affair where you get to know them really well because you’re on the  phone with them all the time,” Oliver agreed. The gallery had never signed an artist sight unseen before, but she knew Swaby was something special.

“Gio’s work is super dynamic. It’s well crafted, it’s singular,” Oliver said. “And once I spoke to her and heard the conceptual underpinnings that the work was based on, I just fell head over heels.… if you like it in photos, when you see it in person you fall madly in love.”

“Gio Swaby: Both Sides of the Sun” includes work from three series, all of which serve as celebrations of Black womanhood. The artist works with fabric to create threaded line portraits and striking silhouettes using colorful textiles, the patterns strategically placed to echo the natural curves and forms of the body. Many of the works are done in life-size scale, Swaby’s subjects—often, friends she photographs—proudly taking up space.

“We don’t have enough images of Black bodies experiencing joy. The media feeds us so many images of Black people in moments of suffering, and it effects you because you see yourself reflected in that,” Swaby said. “I wanted to create a space where we could see ourselves reflected in a moment of joy, celebrated without expectations, without connected stereotypes.” 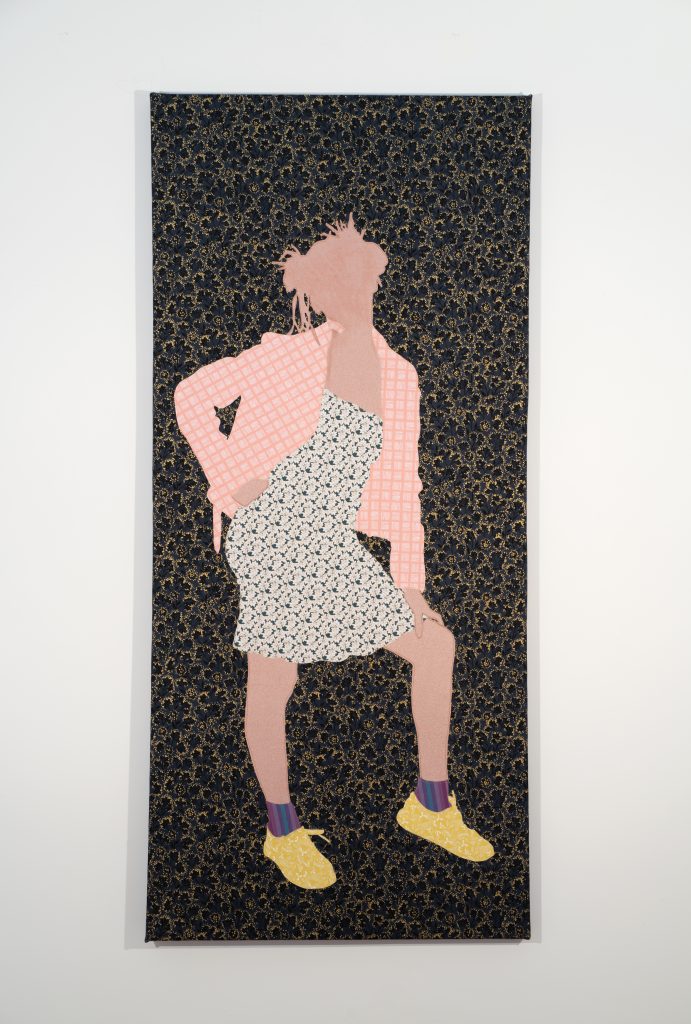 It’s work that has resonated with audiences, including—pending final board approval of purchases—some of the most prestigious museums in the U.S. All told, a whopping eight institutions have bought from the show, one of which is the Weisman Art Museum in Minneapolis. The New York presentation closes this weekend, but a number of the works will be on view at the Museum of Fine Art St. Petersburg in Florida next year.

Prices currently top out at about $25,000 for the largest works—if you’re lucky enough to get one.

“There’s over 100 people on the waiting list,” Oliver said. “It’s in the gallery’s mission statement to find the correct custodians of the work, who will care for it. That includes a lot of museums that will put this work on view for the greater public.”

Swaby has a strong collector base in the Bahamas that she has cultivated over the years, and private collectors who were able to purchase works from the current show include the author Roxane Gay and actor Hill Harper, of CSI: NY and The Good Doctor.

“I didn’t have these kinds of expectations,” Swaby admitted. “It’s a lot to take in, but I’m feeling more excited than anything else.” 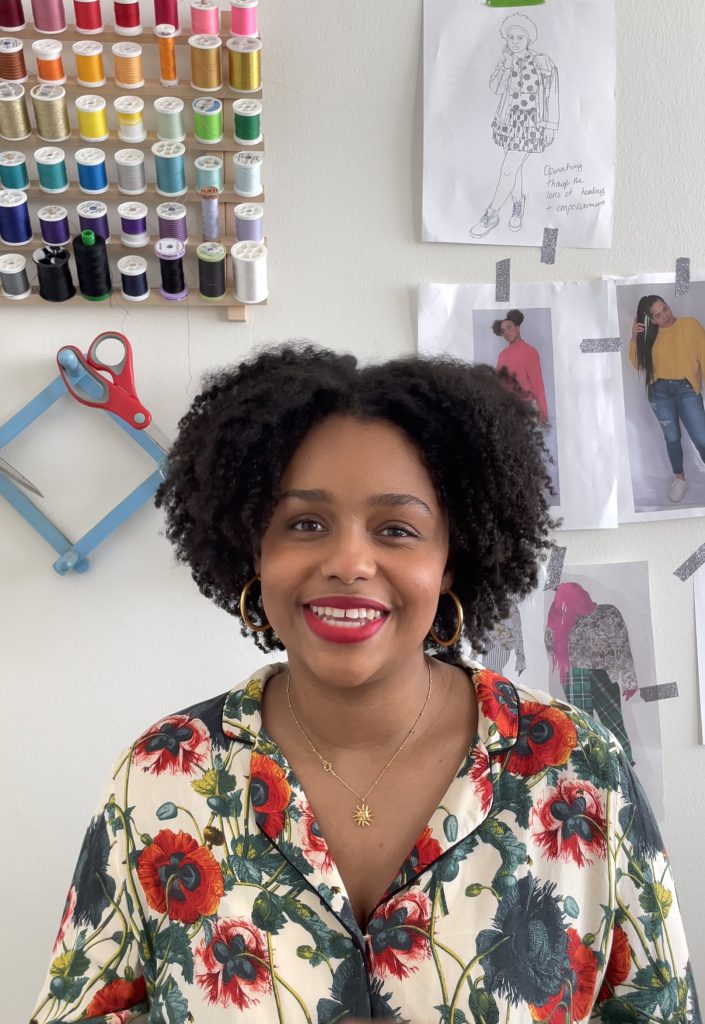 “I think she has unlimited potential,” Oliver said. “I just feel like the sky’s the limit for where she’s going.”

Such success would have seemed unimaginable when Swaby was starting her studies at the College of the Bahamas.

“I had the belief that art couldn’t be something that you pursued as a career,” she admitted. “But nothing else felt right.”

Swaby received her associates degree in fine arts in 2012 and a bachelor of fine arts at the Emily Carr University of Art and Design in Vancouver two years later. She swiftly found her footing as a working artist, staging a pair of solo shows in Canada and the Bahamas, but a love of learning and a desire to refine her craft drew her back to the classroom—albeit virtually—this fall. 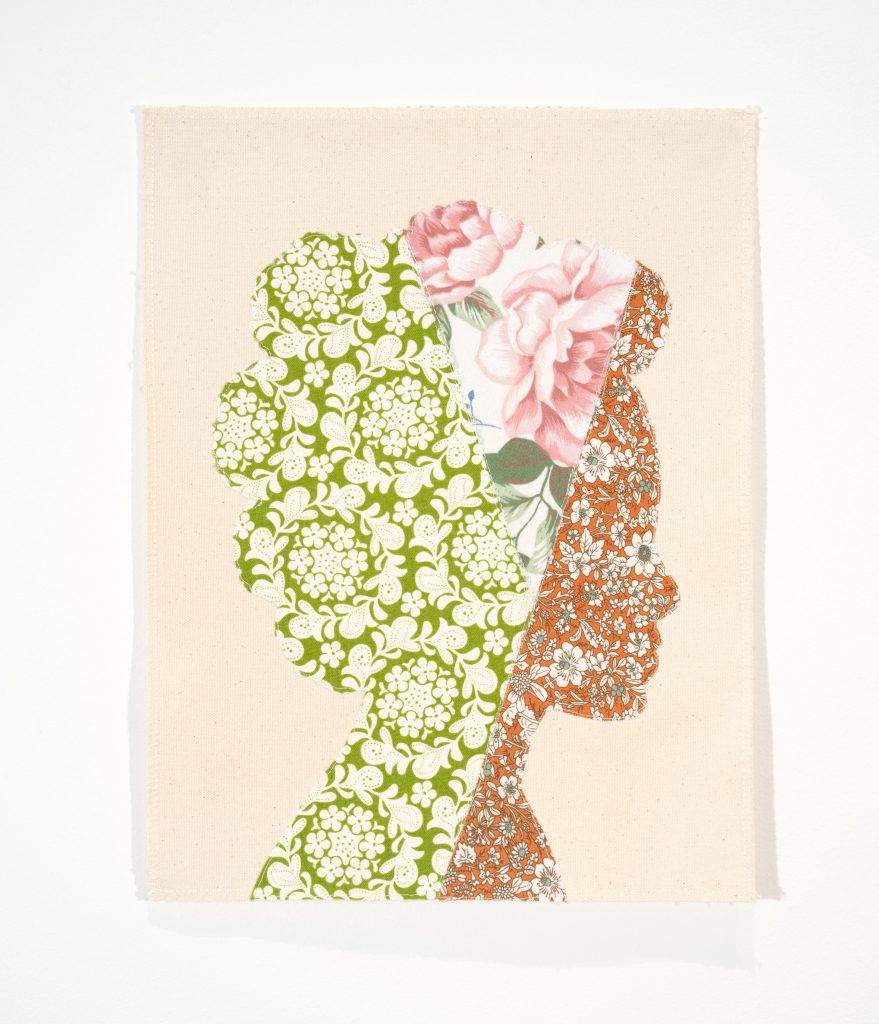 Art and creativity has always been part of Swaby’s life. She traces her interest in textiles to her mother, a lifelong seamstress, who died last year.

“Growing up my house was full of fabric and thread and sewing machines,” she said. “I’m one of five siblings, but I was the only child who was really interested in sewing at all.”

Swaby recalls working on projects with her mom, sewing doll clothes or Halloween costumes. “I connect textiles with an act of love,” she said. 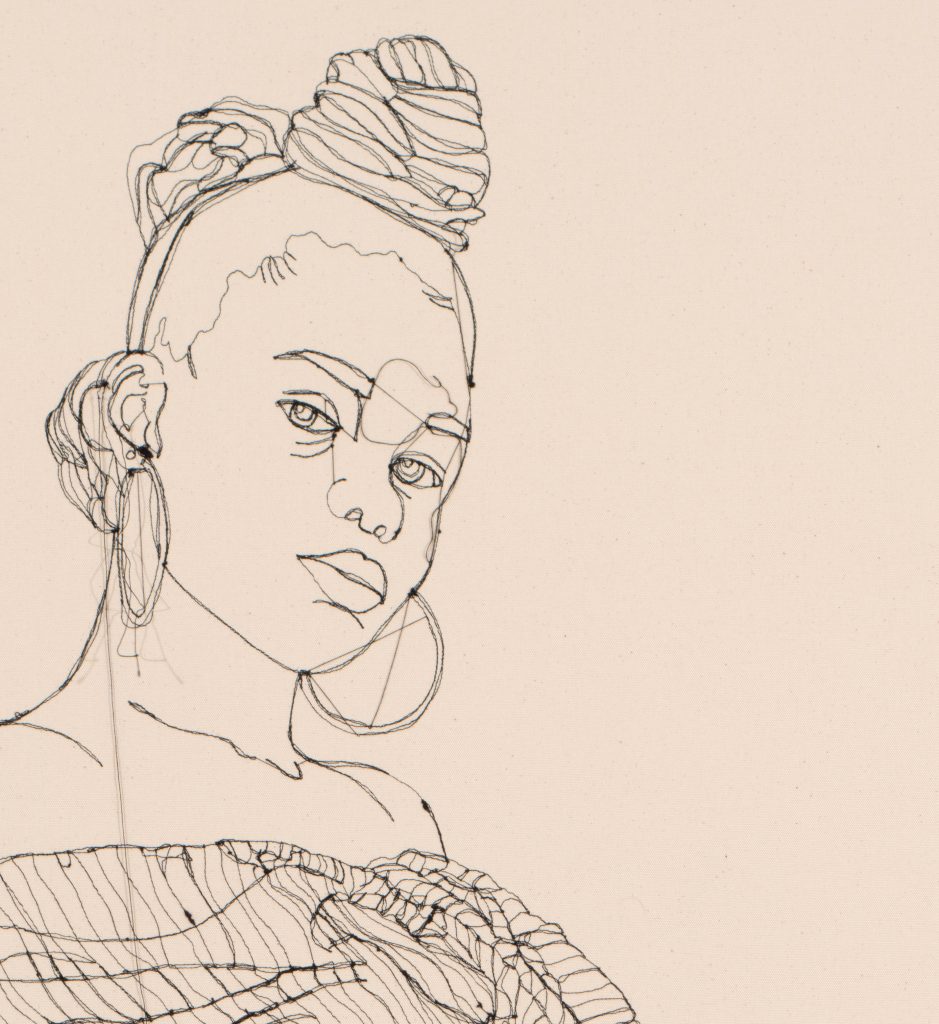 Working in textiles also makes her feel like part of a broader artistic family of Black women who have broken new ground in the medium. Faith Ringgold, Bisa Butler, and Billie Zangewa “have created a path that creates space for artists like me,” she said.

“So much of it is connected with this idea of domesticity,” Swaby said. “I’m thinking about how this work connects with all of the unseen or under-appreciated labor that is a part of womanhood. Working this way is a way to honor that and to show my gratitude for that work.” 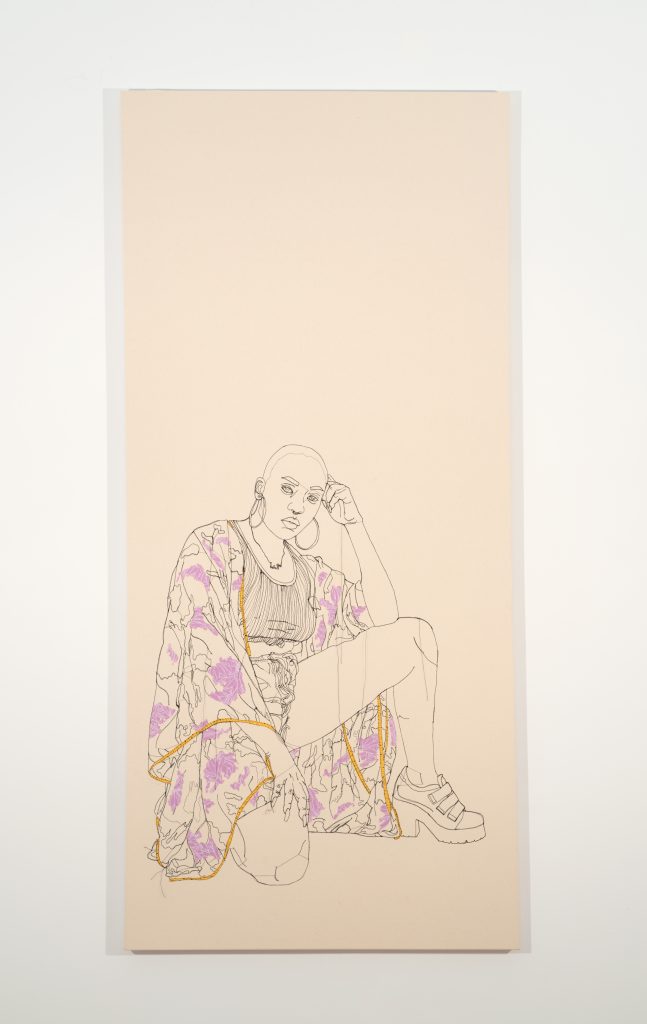 To further highlight that labor, her series “Pretty Pretty” actually features the backside of the work, with all the loose threads from Swaby’s hand-stitched portraits.

“The back of the piece is about sharing a moment of vulnerability with the viewer, rejecting this idea of perfection and embracing what might be considered flaws to have a recognition of beauty,” she said.

All of the work in the current show was made during 2020 and 2021—which required Zoom photoshoots, rather than in-person sessions with models, typically the artist’s friends. The exhibition’s title, “Both Sides of the Sun,” is a nod to Swaby’s isolation in Canada. Despite her physical distance from her loved ones in the Bahamas, she drew strength from the fact that they were all facing the same challenges, under the same sun. 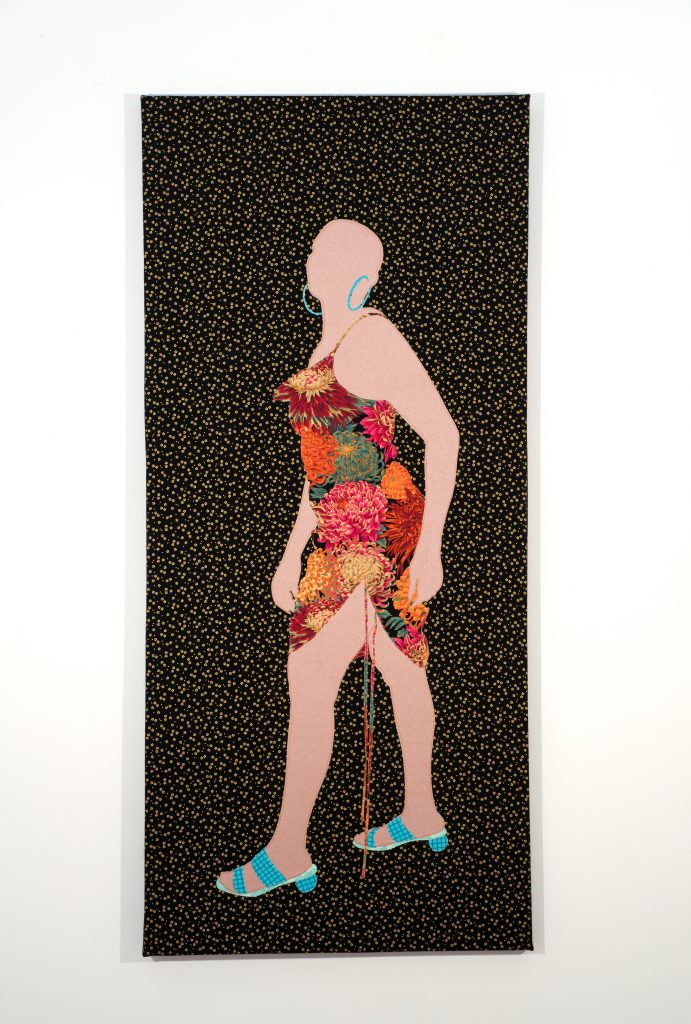 The artist was also responding to the events of last summer, to the murder of George Floyd and the Black Lives Matter protests that swept the globe in the aftermath.

“The feelings that I had at that specific time are always with me as a Black woman, and it was even more heightened during that period,” Swaby said. “It was incredibly hard already to be experiencing this global pandemic and sharing in that loss with everyone else in the world, but also experiencing with all other Black people the incredible loss that we have suffered and we are constantly reminded of.”

Swaby believes that bringing depictions of Black joy into museums and galleries—spaces that have traditionally excluded Black people—is both a radical act of resistance and an opportunity for healing.

“Some of the moments that have had the greatest impact on me as an artist is where I hear feedback from Black women and girls who are seeing the work and recognizing themselves, seeing themselves reflected in the work and being celebrated,” Swaby said. “I’ve had quite a few people  reach out to me on Instagram to express gratitude—it’s a lovefest.”

See more works from the exhibition below. 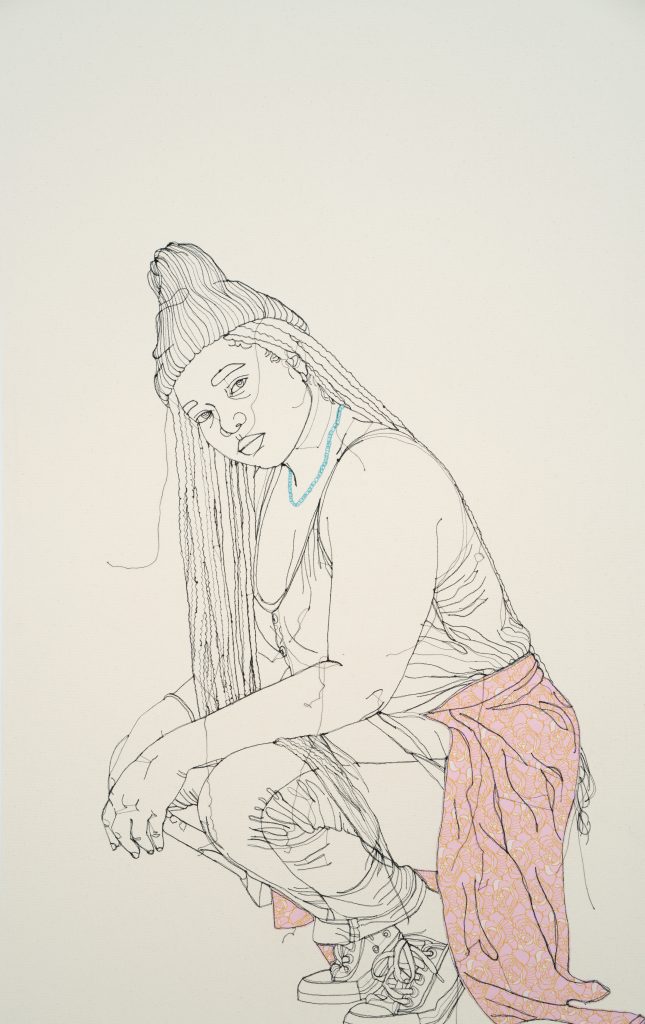 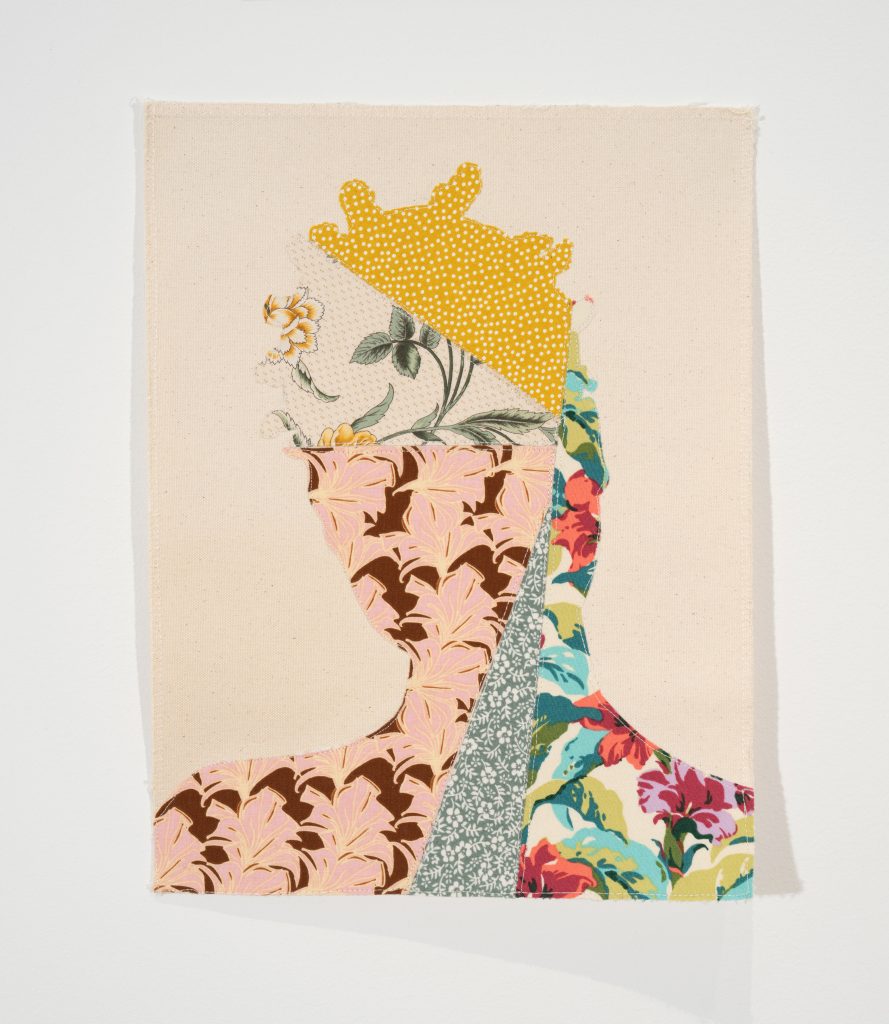 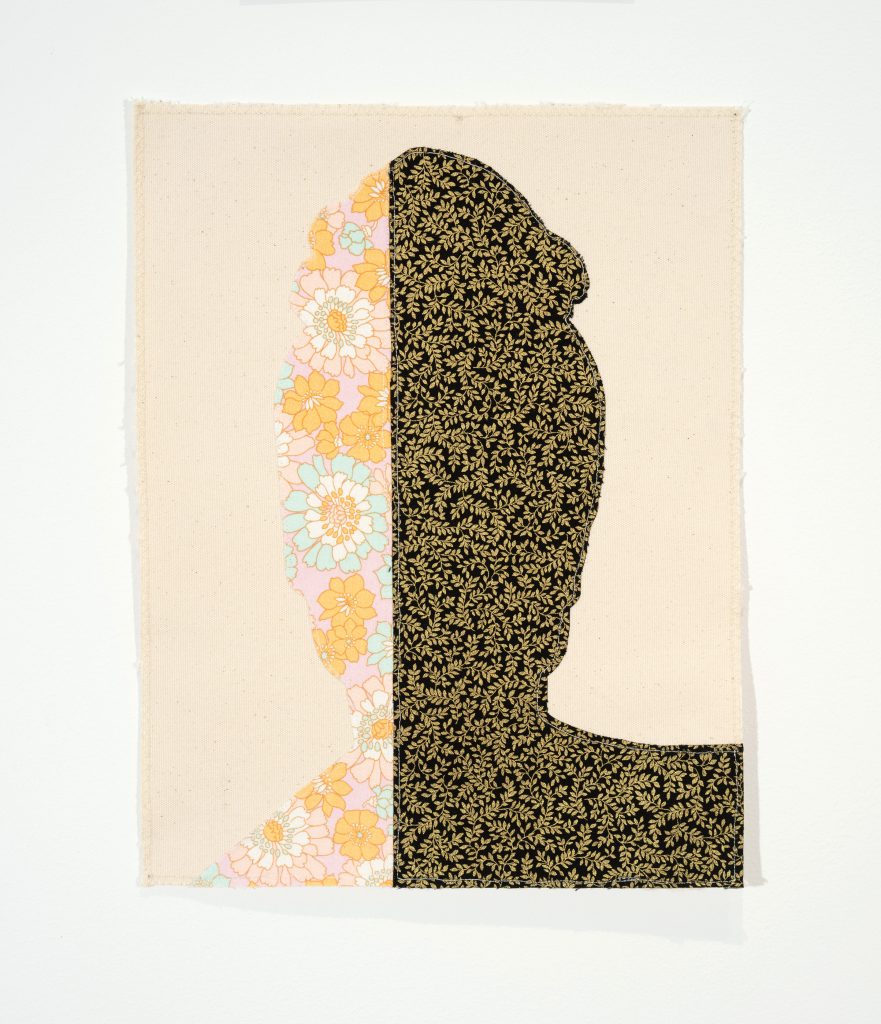 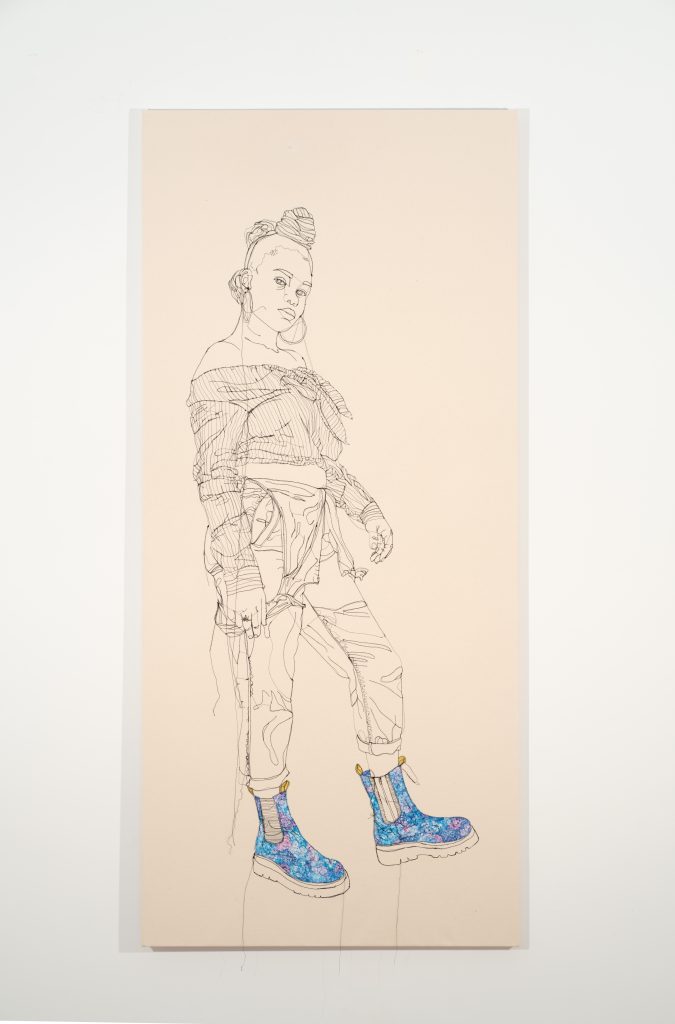 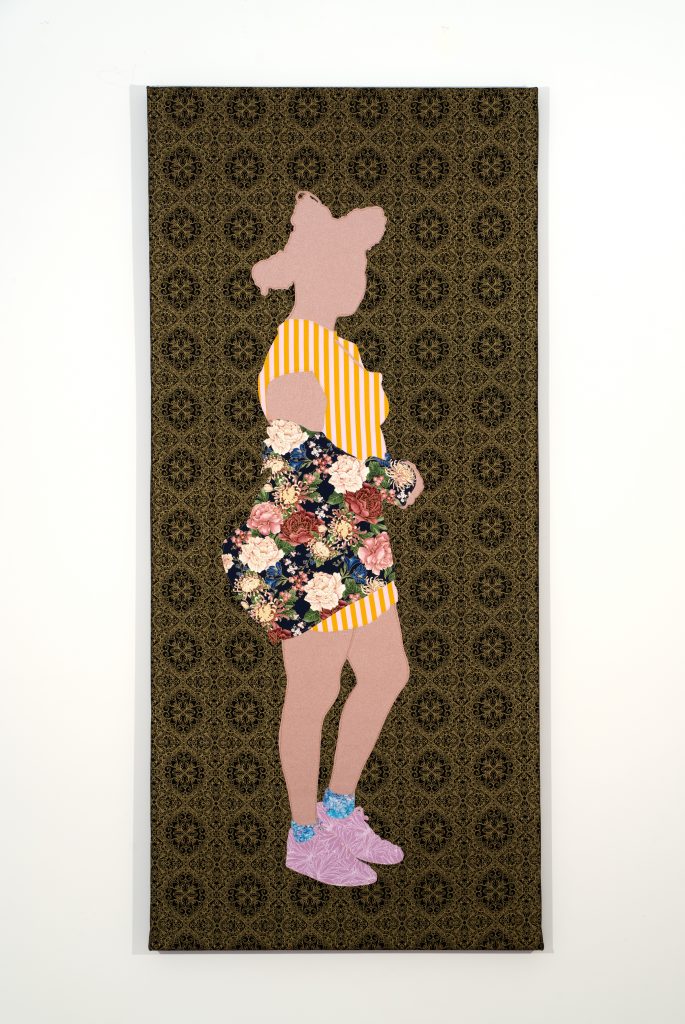 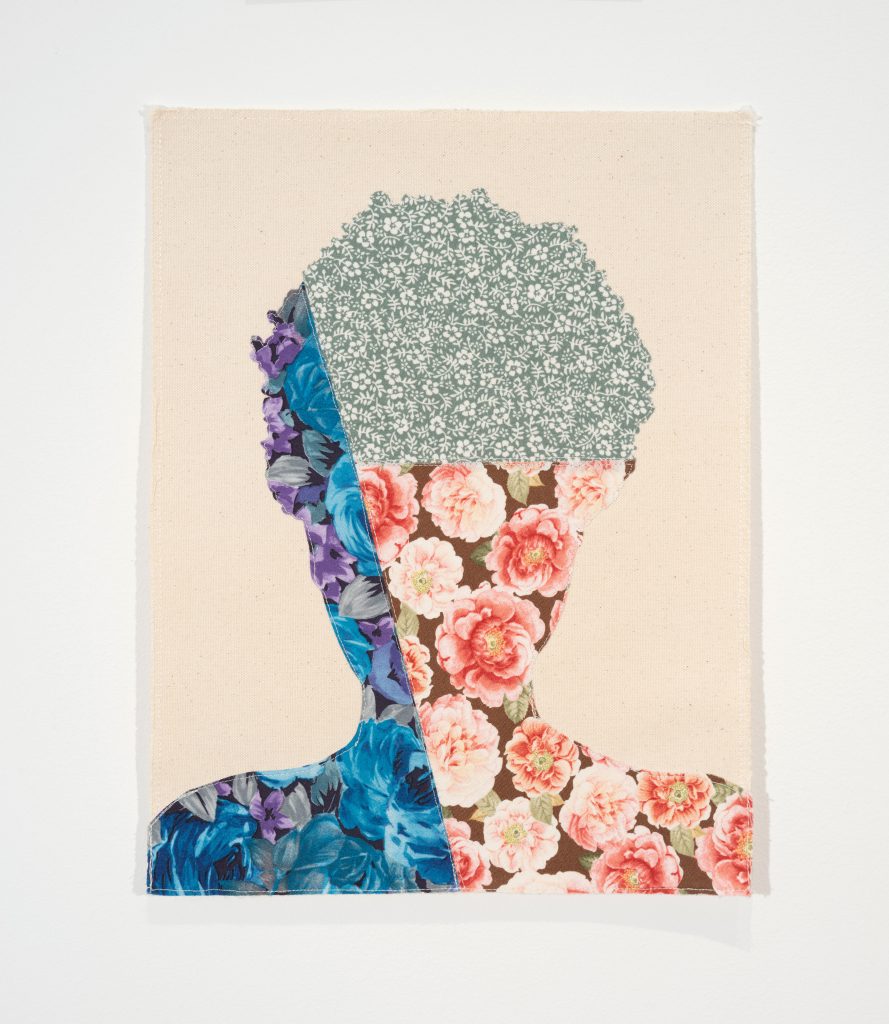 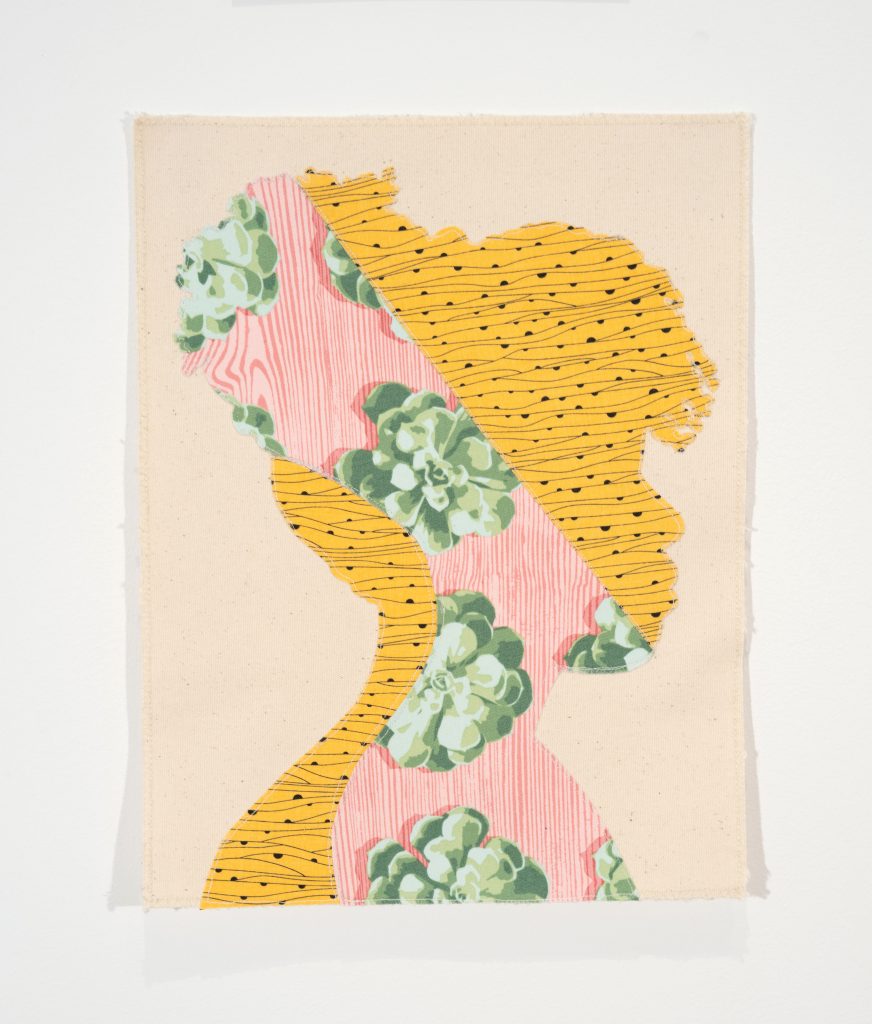 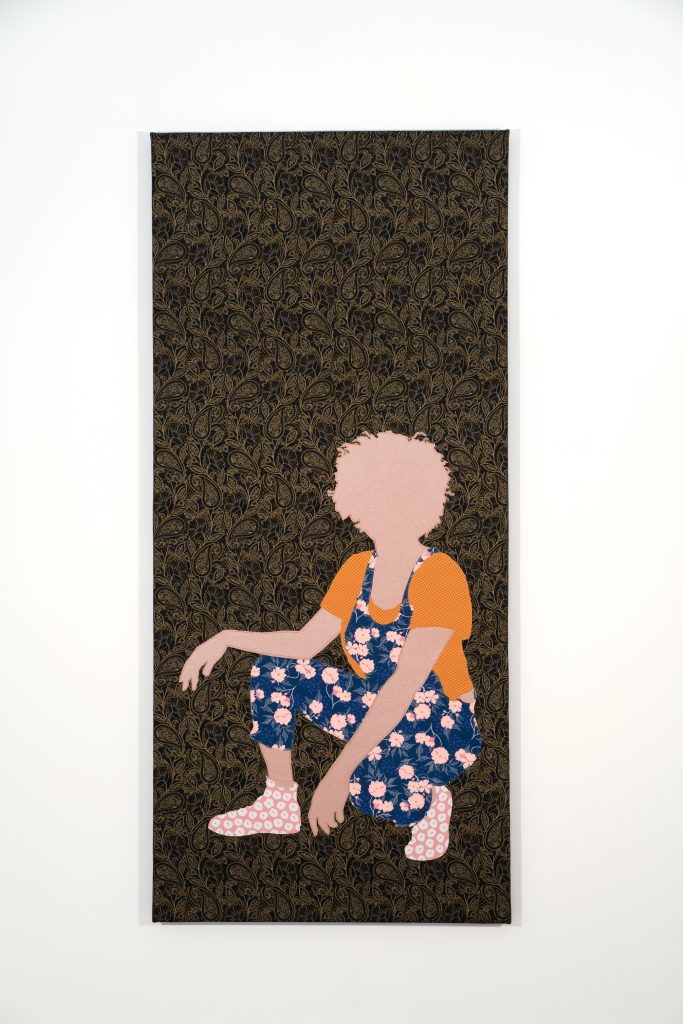