Ex-Sotheby’s Rainmakers Battle It Out With New Firms, Tastemaking Gallery Cuts a Chunk of Its Roster, & More Juicy Art-World Gossip

WAR OF THE FORMER BID KINGS

In 2016, Sotheby’s rolled the dice and spent $50 million—plus $35 million in performance-contingent bonuses—to acquire Art Agency, Partners, a boutique advisory firm. Initially, the move was a bit baffling considering the amount of money involved, but it soon became clear why the deal got done: Sotheby’s needed to have on its team the trio of founders, Amy Cappellazzo, Allan Schwartzman, and Adam Chinn.

In the years since, Sotheby’s went private and all three have bolted from the world-conquering auction house. Now, they’re planning to set out on their own—with upstart enterprises that are due to go head to head.

Almost immediately after joining Sotheby’s, the three started making serious cash for their corporate overlords. Cappellazzo, once the leading rainmaker at archrival Christie’s, was back to her swashbuckling ways, swooping in to secure prize consignments through sheer brute force and egging on billionaires to bid that extra million on the phone.

Schwartzman was the more cerebral of the three and centered his attention on waxing philosophical on the much-heralded In Other Words podcast and newsletter while advising deep-pocketed clients like Howard Rachofsky, Penny Pritzker, Nicolas Berggruen, and—just the tiniest bit controversially—the Saudi royal family. (He’s on the advisory board of Saudi Arabia’s Royal Commission for Al Ula.) 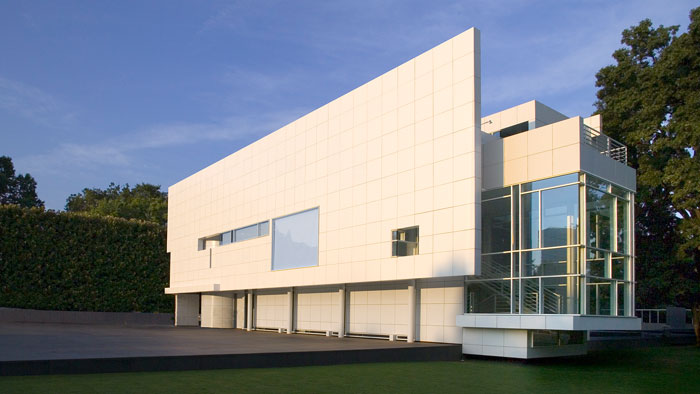 The biggest surprise was Chinn. For a guy with a background as a lawyer and investment banker, his role at an art advisory firm was less obvious, and his role at an auction house, downright head-scratching. But he quickly became a fixture on the phone bank, barking into the receiver, goading on the ultra-rich to nab that pricey Picasso.

After a stint advising for the notorious Mugrabi family—the clan with hundreds of war halls and the balls to disrupt global markets through speculative buying—Chinn started an online auction business called LiveArt, and the buzziest takeaway is that it’s an online platform where both buyer and seller are completely anonymous to one another and can quickly transact without the messiness of personality getting in the way. What’s more, Chinn is only charging a 10 percent commission, with the hope that clients would come to him rather than his former employer, another gallery, or advisory firm. 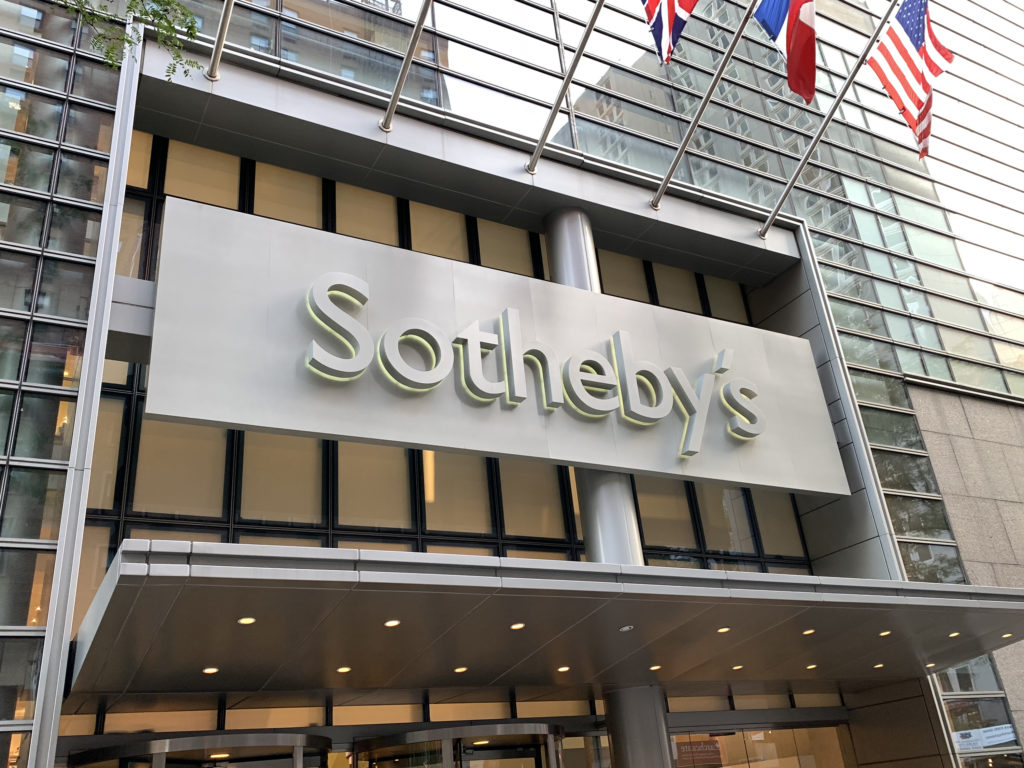 A view outside Sotheby’s in New York City. Photo by Noam Galai/Getty Images.

(Chinn also threw a splashy dinner Tuesday night at Bar Primi on the Bowery—also known as the place you begrudgingly head to when Gemma is full—with a slightly thirsty Paperless Post that included the entire bill of fare for the evening. Ricotta crostini with truffle honey, anyone?)

Competing for oxygen in the art-market atmosphere is Schwartzman and Associates, the still under-the-radar operation that hopes to become the go-to shop for the world’s most tasteful billionaires and their museums. Although he’s yet to launch publicly, Schwartzman has already built a crackerjack team of art-market sharpshooters including many former Art Agency Partners colleagues. There are also a few ringers mixed in, including Simon Preston, the onetime Lower East Side gallery owner who had a short stay at Pace before getting axed in a round of layoffs. Rounding out the team are vets from LVMH, Sotheby’s, and David Zwirner.

As for Cappellazzo, sources say she’s planning her own deeply ambitious shop, a firm suited to a post-COVID world where good material is hard to come by but demand—and the capital to fuel it—is endless. After wrapping up her time at Sotheby’s in the next few weeks, she’s going to take the summer off and launch in mid-fall.

Cappellazzo and Schwartzman declined to comment; Chinn did not respond to an email. 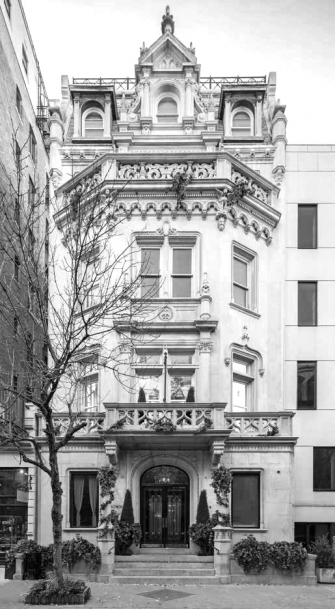 Word came down last week in hushed whispers: a large chunk of the roster of David Nolan Gallery had been taken off the site seemingly overnight. The timing was odd: Since moving from the northern part of West Chelsea a few years back to a stately townhouse on the Upper East Side, David Nolan, who has maintained a gallery presence in New York for decades, seems to be absolutely thriving. The show up right now—a survey of artists nurtured and championed by the great dealer Klaus Kertess—has been a real hit, drawing even the most staunch of downtown kids up to the nabe that Nolan now calls home. 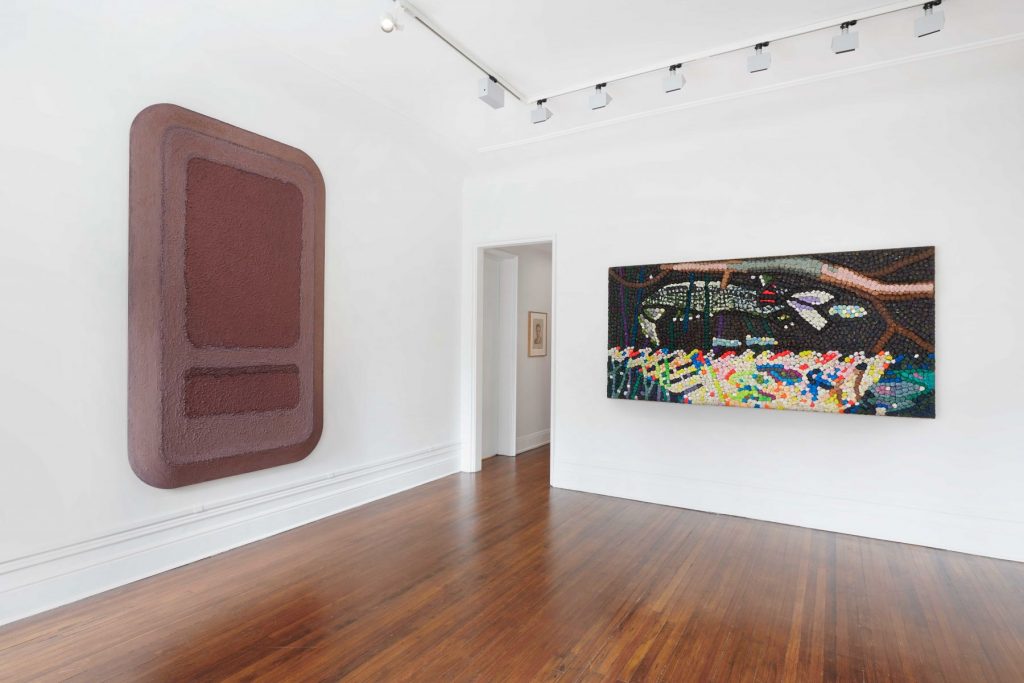 But one thing is clear: a number of longtime Nolan artists who were listed on the roster earlier this year are no longer there. According to a cached screengrab of the official list from March of this year—thanks again, Wayback Machine—the following artists were all on the roster at the time: Alice Maher, Ray Yoshida, Gavin Turk, Alexander Ross, Steve DiBenedetto, and Serban Savu. Now, they are all off (or have been demoted from “represented” to simply having “works available”), leaving the roster at 16 artists including Barry Le Va, who died earlier this year.

What happened? Wet Paint reached out to them all; many did not respond. One of those who was reached said they hadn’t worked with the gallery in years, indicating the purge could have been a matter of summer housekeeping rather than a coordinated mutiny or a brutal culling. Nolan didn’t respond to a request for comment. 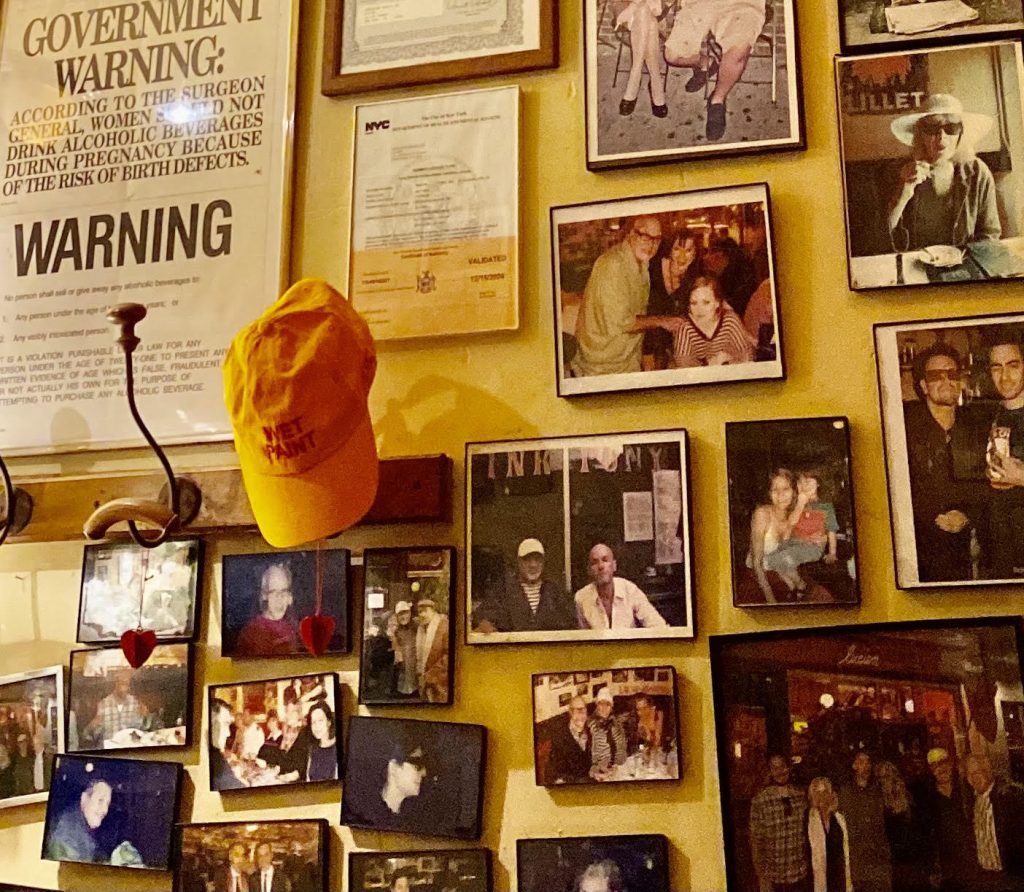 One more bit of breaking news: After nearly 80 columns chock full of scandal and gossip, your faithful Wet Paint scribe will be leaving Midnight Publishing Group at the end of the month to become an art columnist and staff writer at Vanity Fair.

Which means: Midnight Publishing Group needs a new gossipmonger to take over this illustrious column! Do you think it could be you? If so, see the full job posting here and submit an application.

And, since you are wondering, yes, I will figure out what to do about all those hats. Stay tuned for an update in the next column, which will resume after a July 4th break.

In honor of the Cady Noland show at Galerie Buchholz, last week’s clue was her great work Oozewald, shown from behind. It was bought by Mitchell and Emily Rales for their private museum, Glenstone. Only three winners this time: Brussels-based curator Louis-Philippe Van Eeckhoutte; Cyprien David, exhibition coordinator at Gagosian Geneva;  and Dan Desmond, executive director of the Blue Rider Group at Morgan Stanley.

Here is this week’s clue. Name the artist and the owner! 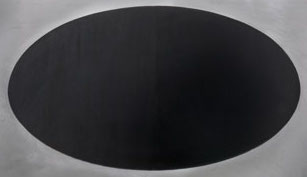 … Will Ferrell and his wife, Viveca Paulin-Ferrell, have loaned a handsome Huguette Caland to the Drawing Center‘s current show … Pace is letting Michael Xufu Huang, the founder of Beijing‘s X Museum, curate a show at its space in Palo Alto …  Charles Ray will be showing a new self-portrait at Glenstone, to be unveiled this December … Gagosian is doing Felix, the Los Angeles fair held at the Hollywood Roosevelt hotel, for the first time, and the booth features works by Duane Hanson, Ed Ruscha, and Taryn Simon that “provide an illuminating contrast between real life and Los Angeles’s more elusive fantasies of glamour and fame” … Speaking of Felix, the art-world podcast Nota Bene will be throwing a big party at some point that week, stay tuned … George Adams Gallery has opened its new space in Tribeca, with the storefront found by downtown’s top white-cube procurer, Jonathan Travis … 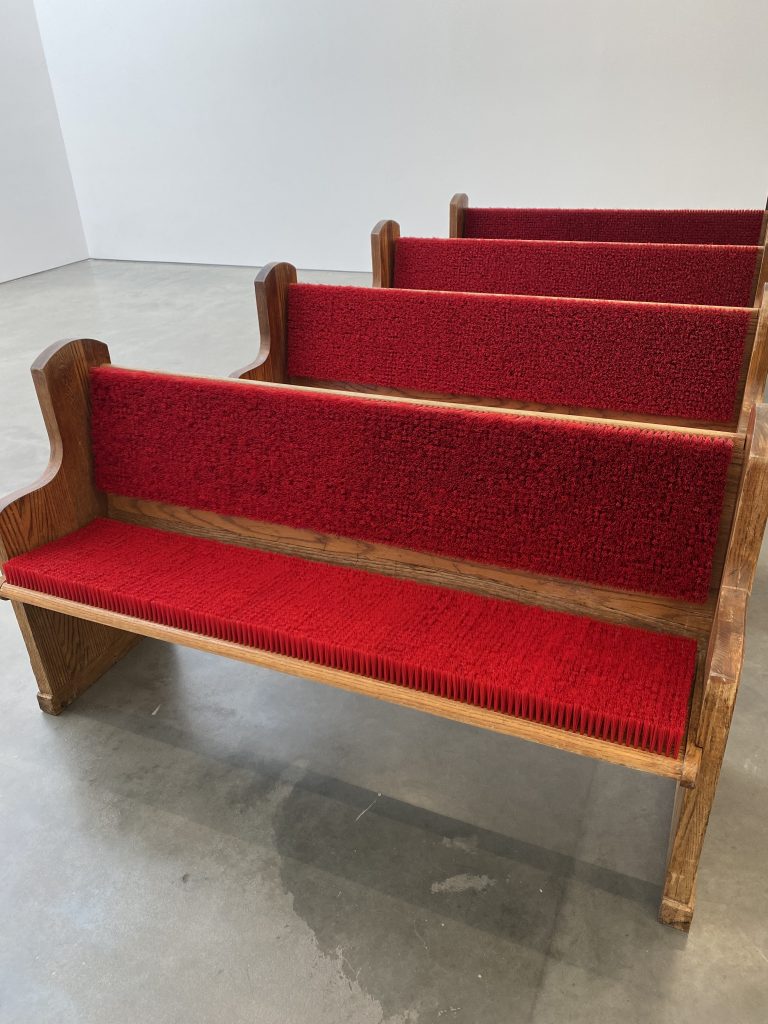 Four editions of Good Hair I (2021) by Hugh Hayden, included in his new show at Lisson, “Huey.” Photo by Nate Freeman.

*** Hundreds of downtown artists, dealers, and collectors at the Bowery Grand Hotel party hosted by Lisson Gallery to mark the openings of shows by Hugh Hayden and Van Hanos, both extremely buzzy and must-see …  David Zwirner throwing the afterparty for the opening of “More Life,” a series of shows marking the 40th anniversary of the AIDS epidemic, with a party at Julius, said to be the oldest continuously operated gay bar in New York *** Actress and noted hanger-on to art cliques Margaret Qualley at Supper in the East Village with fellow actor Lucas Hedges ***