Ever Wonder What a 17th-Century Dutch Canal Smells Like? No? Well a New Show Invites You to Sniff the Odors of Art History Anyway


Seventeenth-century painter and biographer Arnold Houbraken records that Rembrandt once told a studio visitor to stand back from a canvas and its disagreeable paint fumes. Whether Rembrandt used his warning as a pretext to corral viewers to optimal viewing distances, or believed that paint—often made of noxious elements like lead—posed a risk, is uncertain.

But “Smell the Art: Fleeting Scents in Color,” a new don’t-scratch-but-do-sniff show at the Mauritshuis in The Hague, reverses the Dutch master’s advice.

In preparation for the show, the museum recently shipped kits with scent spritzers capturing two of the exhibition’s eight scents to journalists. It is now working on a larger “fragrance box”—with four of the scents created for the exhibition—to ship to viewers (smellers) worldwide. Each package, with an invitation to a digital tour, runs €25.

“I don’t think that’s been done before—that you can actually smell something at home,” Ariane van Suchtelen, the show’s curator, tells Midnight Publishing Group News. “We have to see how it works. This box is still an experiment.” 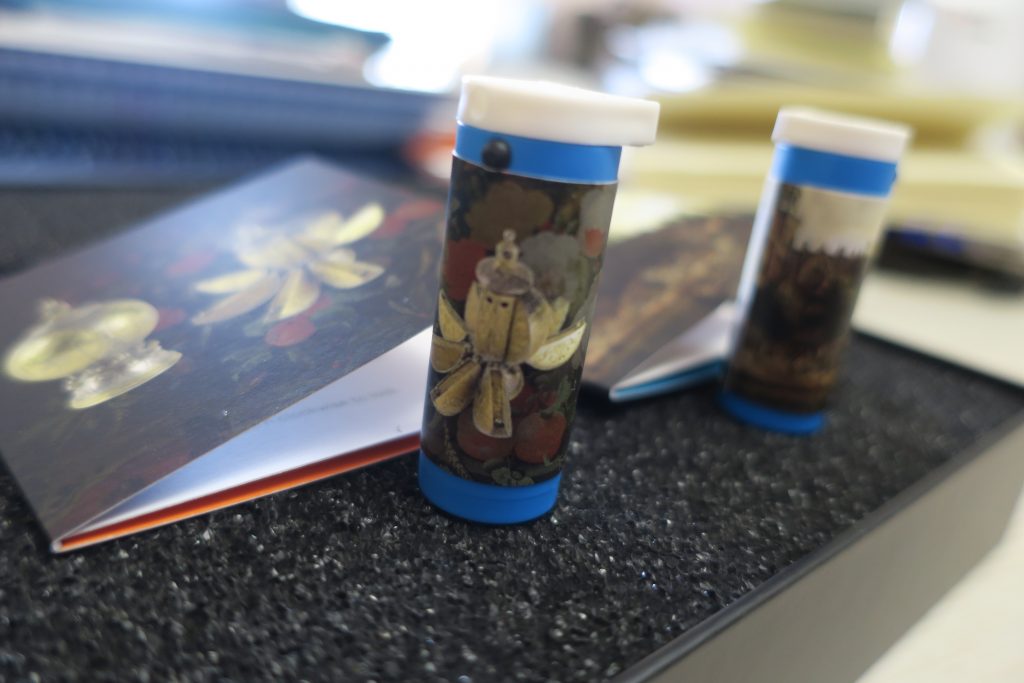 Part of the home experience fragrance box accompanying the exhibition “Fleeting – Scents in Colour” at the Mauritshuis Picture Gallery.

The exhibition explores how smell enhances other senses, which is consistent with the research of Dutch national Justus Verhagen, a neuroscience professor at Yale University who says there is truth to the “Proustian phenomenon” that odors elicit nostalgic, autobiographical memories.

“The sense of smell is tightly interwoven with the evolutionarily old limbic system of the brain by having direct access to structures like the amygdala, hippocampal complex, and cortex,” Verhagen says. “These are strongly involved in emotions and memories.” Other senses, like vision, are “much less direct, as they are gated via the thalamus, among other things.”

Those who lose their sense of smell—as many COVID-19 patients do—report that subsequent experiences are bland. “You feel more ‘connected’ to the environment if you simultaneously smell it,” Verhagen said.

And you’ll definitely smell the environment.

International Flavors & Fragrances, which created the scents for the exhibition, created one that approximates the smell of the building’s interior, which John Maurits (the museum’s namesake), decorated with wood he brought from Brazil.

Present-day visitors will experience a lost scent, as an 18th-century fire destroyed the original interior. (The Mauritshuis also worked with the company to create a separate new smell-based tour of the permanent collection, designed particularly for visually impaired visitors.)

“We view and experience everything—not just art—with all of our senses,” van Suchtelen says. “The exhibit is also about exploring how the artists, who were very much aware of this fact, dealt with that in their paintings, and how they suggested and conjured up all sorts of smells.”

Prior to researching the show, van Suchtelen had often seen Jan van der Heyden’s View of Oudezijds Voorburgwal with the Oude Kerk in Amsterdam (circa 1670) in the Mauritshuis collection without noticing a privy beside the bridge. The outhouse empties into the canal, where a nearby woman washes clothing; presumably the clothes emerge dirtier than before.

Tourists are likely to celebrate Dutch canals, which no longer stink, for their Instagram splashes, which means modern eyes (and noses) need to recalibrate when taking in 350-year-old paintings.

“We don’t have that ‘smell memory,’” van Suchtelen says.

To fill those lapses, researchers shared historical recipes with perfumers to approximate what, say, the bleaching fields depicted in a Jacob van Ruisdael landscape would smell like, or what chemicals were used to treat linens like the ones in a Pieter de Hooch interior, and how they would smell. (Both works appear in the exhibition.) 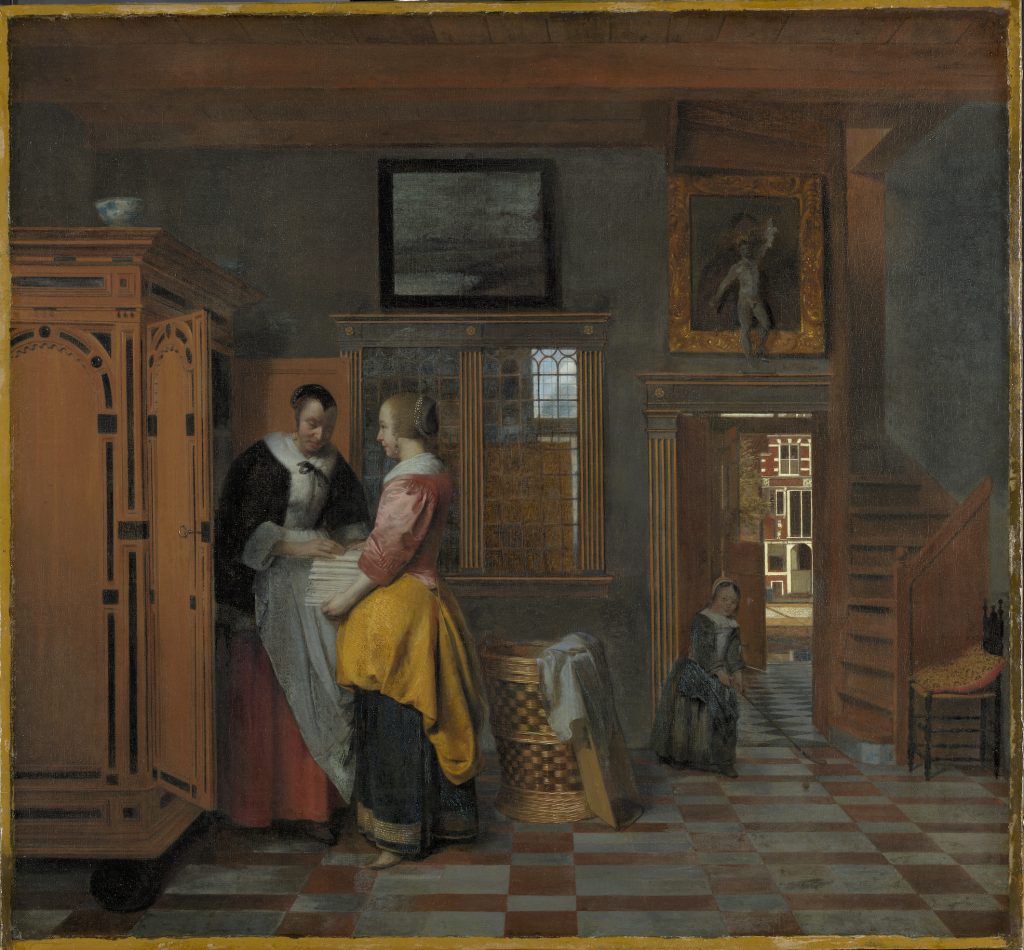 Pieter de Hooch, Interior with Women in front of a Linen Cupboard (1663). Courtesy of the Rijksmuseum, Amsterdam.

Lizzie Marx, a doctoral candidate at University of Cambridge researching painted smells, provided the recipe that informed one of the scents sent to journalists: a pomander with a winter perfume. Pomanders, from the French for “amber apple,” were fashion receptacles which delivered scents believed at the time to reverse bad smells that bore illness and plague.

(The other scent… er, odor… sent out was one approximating a foul-smelling canal. Indeed, the spritzer left this reporter with the impression of a dirty gym bag full of spoiled fish.)

The exhibition’s exploration of medicinal smell use, like the pomander, is also timely. It’s easy to look down one’s nose at foolish 17th-century belief in illness-bearing smells, but there was little understanding a year ago about how, if at all, COVID-19 spreads through the air and on surfaces. In the 17th century, people thought disease entered the body through porous skin. Unlike today’s deodorants, perfumes were thought to neutralize dangerous smells.

(As far as how the scents in the show are distributed, sophisticated dispensers—which use a dry method to release scent molecules—work even for masked visitors, and are operated via foot pedals.)

Other sections of the exhibition address religious ideas about smells—mostly centered on clashes between Catholics and the Protestant church in 17th-century Holland—and smells and food (although the Mauritshuis addressed that more in its 2017 exhibition, “Slow Food: Still Lifes of the Golden Age”). 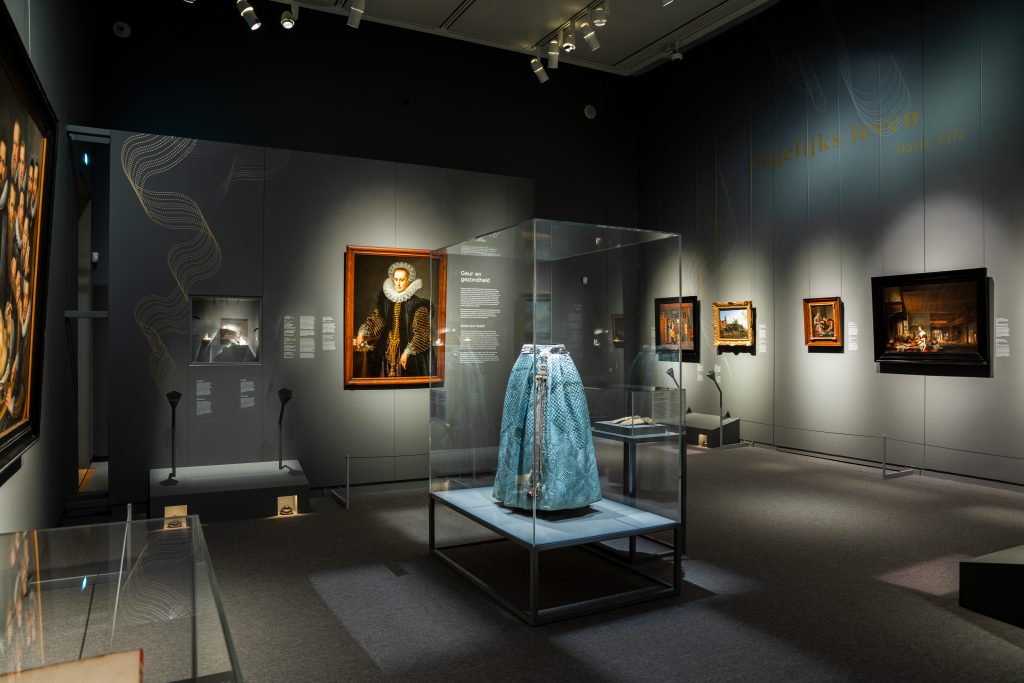 Jacob Toorenvliet’s Young Woman and Fishwife (1675–80, private collection) in the current show portrays the older woman masking the smell of no-longer fresh herring with very-fragrant orange and while lilies. The young woman is twice maltreated, as a man robs her purse from behind in a manner suggesting sexual assault.

Exhibition catalogue contributions—including several by Lizzie Marx—also chart new research territory. An essay by Jaap Evert Abrahamse, a city historian, addresses smells in Dutch cities. (Urban planners, you will learn, took into account eastern- and western-blowing winds, which could carry stenches in and out of cities.)

But in the end, when it comes to the smell kits, van Suchtelen warns that it is skin off a museum’s nose to create and ship fragrance boxes.

“We will be extremely happy if we break even,” she said of the 1,500 boxes the Mauritshuis commissioned. “If they are popular, we can of course make more. If we sell out, we break even, I think. So if we don’t, we don’t.”

“Smell the Art: Fleeting Scents in Color,” is on view at the Mauritshuis, The Hague, through August 29.