Britney Spears, Allegory of the 20th Century? How the Misunderstood Pop Star Has Inspired Visual Artists as an Avatar of the Early Aughts


In Because of You, French painter Claire Tabouret’s 2016 solo gallery debut in the U.S., the titular works were a pair of portraits of Britney Spears, mostly shorn, with the remnants of a brunette mane still hanging from the back of her scalp. In soft washes of oil paint, the canvases tenderly immortalized the infamous moment in 2007 when the pop star had shaved her own head, as well as the obsessive, particularly cruel media circus that followed.

That episode was the first Tabouret had ever heard of Britney—but she was instantly struck by the singer’s removal of her own hair, a quintessential symbol of femininity. To her, this was an act of re-appropriating one’s image, a powerful rebuttal to the suffocating demands of unrelenting public scrutiny.

“These are themes that are often present in my work,” the painter told Midnight Publishing Group News, “the representation of the female body in public spaces and the politics of body language.”

Tabouret is not alone in her fascination with Britney’s image. Its undeniable potency recently reentered the headlines with the viral success of Framing Britney Spears, the New York Times documentary on the ongoing battle to #FreeBritney from her father’s conservatorship, followed by Spears’s own explosive testimony in a recent court appearance. 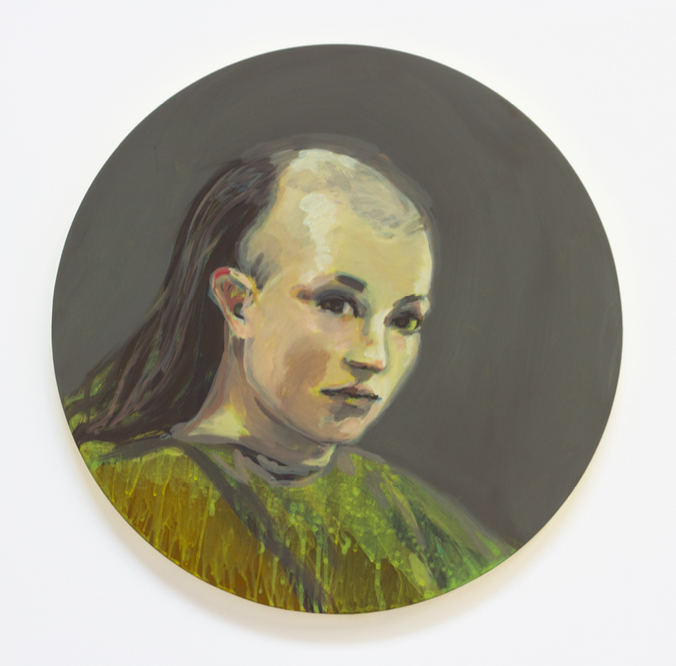 Like Tabouret, Framing Britney Spears also reflects on the media obsession with a star who regularly went viral before the invention of the term. It revisits the early aughts, when tabloids responded to the public’s insatiable appetite for Britney by paying up to $1 million for a single photograph, fomenting a spectacularly ruthless and constant invasion of her privacy.

As Framing Britney Spears and the copycat documentaries that followed examine this startlingly toxic behavior, they join a project that artists had already started: a kind of cultural reckoning where Spears’s likeness becomes a vehicle of serious cultural critique.

Over the years, across painting, digital collage, and other media, Tabouret and others have used the star’s image to pose questions of media ethics; the role of technology in representation; authenticity versus artifice; and above all, pointed instances of sexism that were deemed perfectly acceptable in the very recent past.

Looking to the past with a fresh pair of eyes, what emerges is an unlikely transformation: a former teen pop star turned allegorical symbol. 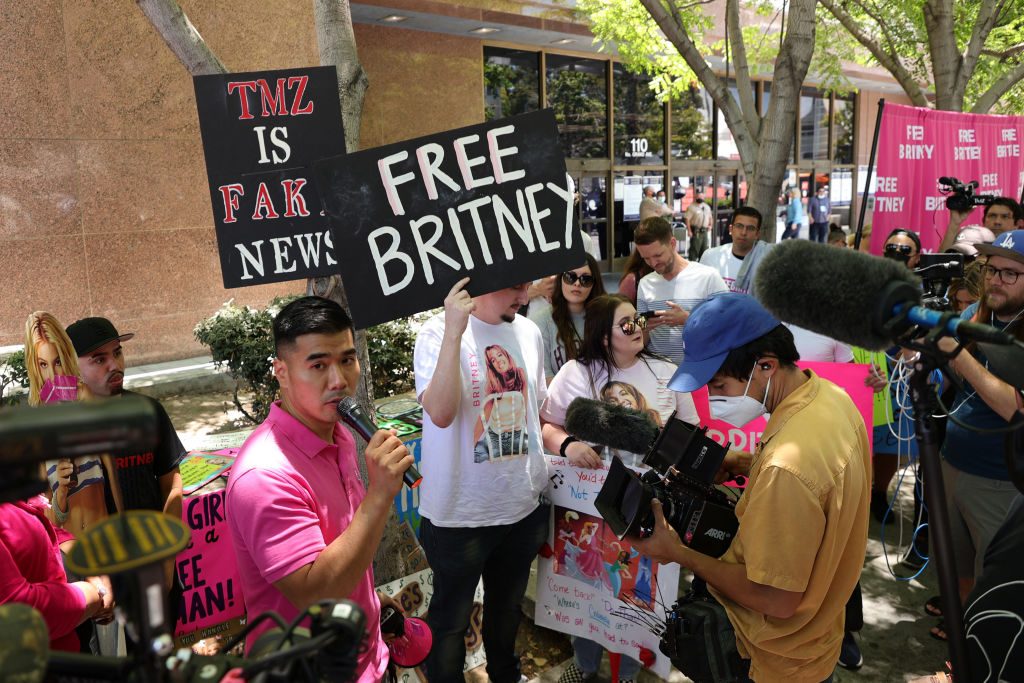 Pop in the Age of Digital Retouching

In (Pop) Icon: Britney, artist R. Luke Dubois’s beguiling 2010 work of digital animation, clips from a DVD box set of Spears’s greatest hits morph from one scene to the next in a glowing, almost ethereal haze. Throughout the never-ending sequence, her eyes are unwavering, locked in position within an elaborate gilded frame. Her vocals are haunting, having been digitally hollowed-out to match the acoustics of Italy’s San Vitale Basilica, one of Western Europe’s most important sites of Byzantine iconography.

DuBois presents Britney as an icon in the original sense of the word—an object of religious veneration—while touching on the disruptive technologies that had emerged alongside her career. “She was the first pop star to exist entirely in the age of AutoTune and Photoshop,” he said, having taken digital audio and visual retouching to dramatic heights in his piece.

The work also references the popular obsession with catching Spears at her most unvarnished and unretouched, an “incredible violation of privacy” that she faced on a day-to-day basis. “I wanted to recontextualize [the media frenzy] in the broader framework of surveillance capitalism and surveillance culture,” he said, noting that the never-repeating imagery of (Pop) Icon: Britney is generated by a facial-recognition software that the U.S. military had developed in 2002, during the ascent of Britney-mania.

The religious framing alludes to the fact that “Spears’s entire media management ecology was setting her up to maximize the Madonna-whore dichotomy in really gross ways,” he added. The Freudian theory suggests that men can view women as respectable virgins or objects of sexual fulfillment—but never both.

Sexism on a Popular Culture Scale

Although Britney is a talent in her own right, artists have looked less to her creative output than her place in a particularly fraught period in white American culture. Having dropped her first album in 1999, her most active years bookend a mythologized era of starry-eyed Americana: Below the glossy veneer of neoliberal optimism, rhinestoned trucker hats, and teenage romantic comedies (recall 1999 as the year of Cruel Intentions, American Pie, and She’s All That), it was the era of George W. Bush, the rapid expansion of the military industrial complex, and an encroaching economic collapse. Within a decade, the nadir of Britney’s career would coincide with a global recession.

“The early 2000s seems to me almost the crescendo, the high point, the most dramatic version of sexism on a popular cultural scale,” says artist Casey Kauffmann, whose online practice of digital collage looks back at that period with both nostalgia and contempt. 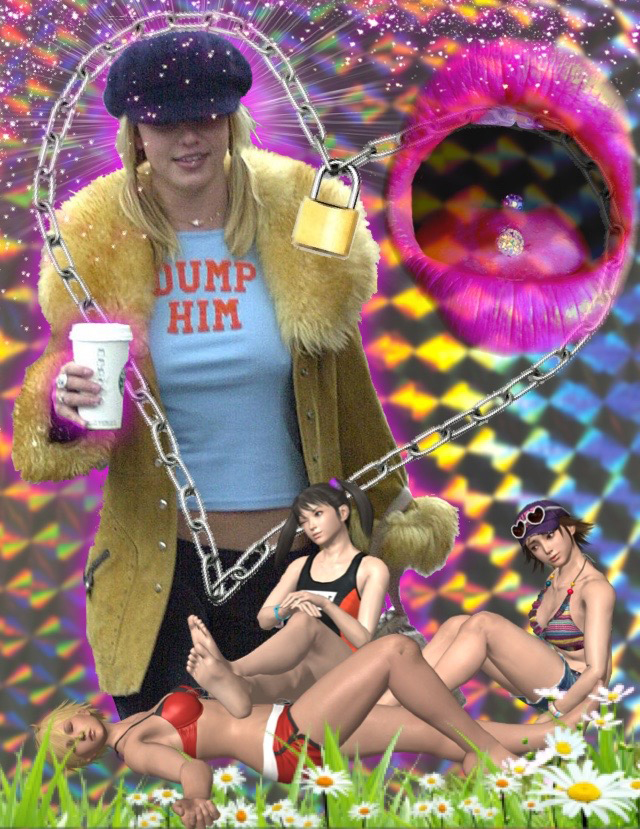 She layers images of MTV sensations, including a young Britney in bedazzled short-shorts, between princess clip art and sparkling rainbows, the kind of superficial, candy-coated aesthetics that were prescribed to young girls during Kauffmann’s adolescence. On her Instagram feed, a space where women have recently found control over their own images, Britney, Paris Hilton, and other former teen idols appear to revel in the absurdity of each collage, but upon closer inspection, express exhaustion, frustration, and dread.

To Kauffmann, the recent Britney documentary was particularly hard to watch; she was struck by the cavalierness with which grown men could ask a young woman about the status of her virginity, her fitness as a mother, and the size and authenticity of her breasts.

All of this connects to the much longer history of male authorship in the representation of women, she said, which came to a head during the relentless paparazzi culture of the early aughts. According to Kauffmann, “You cannot disconnect Britney Spears from that era of deeply personal exposure, of extreme sexism with only a hint of agency.”

In Christophe Rohan de Chabot’s solo show at Gaudel de Stampa in Paris last year, the artist mounted two identical, close-up portraits of Britney across from two identical paintings of human skulls. Between them, immaculately combed “semi-natural” blonde wigs lay on the floor, suggesting she had been stripped of some synthetic veneer all the way down to her bones.

“She’s always appeared somehow to me as a product, not simply as a human being,” Rohan de Chabot said, recalling the nervous anxiety he felt as a 13-year-old boy when Spears first appeared on his T.V.

In contrast to Tabouret’s description of Britney in terms of female empowerment, “that was not my vision of femininity,” he recalled, but rather of commercial export—an aggressively over-manufactured, over-sexualized version of the all-American girl. 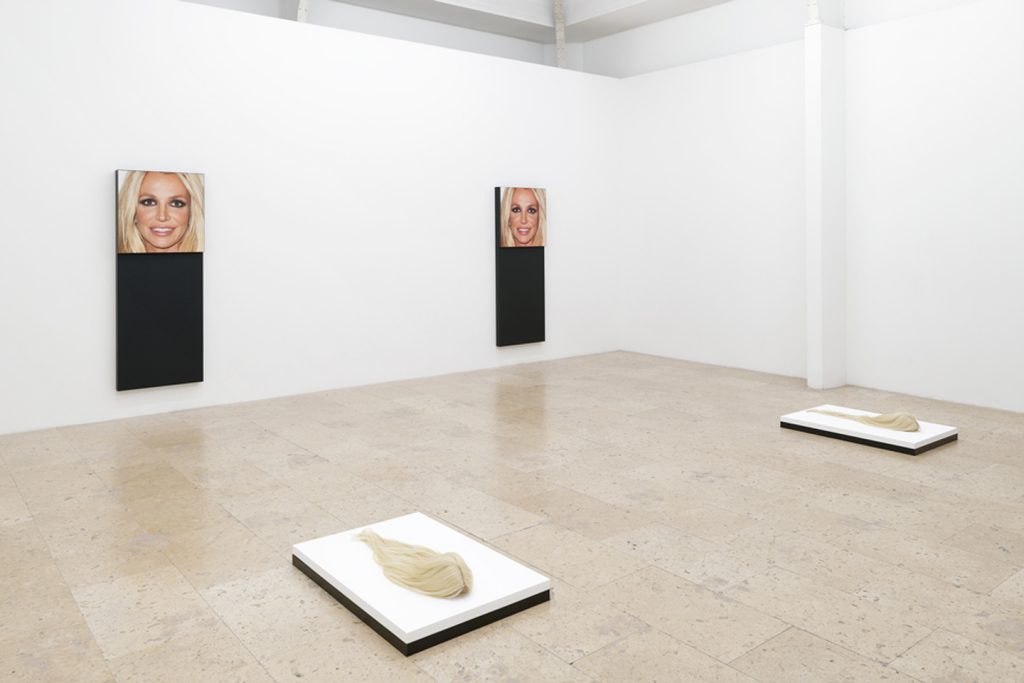 The reality of who or what Britney truly is gets lost somewhere between these polarized extremes of public opinion. “It’s easy to project on her,” DuBois said, especially given the proliferation of imagery taken without her consent.

Even as Framing Britney Spears critiques the distortions and lack of agency in the singer’s public image, director Samantha Stark admitted that Britney had zero participation in the documentary’s production.

“Since Britney has such a tight circle around her,” she told Entertainment Tonight, “journalists haven’t really been able to interview her freely.” (Britney later condemned the hypocrisy on Instagram, although fans fervently debate how much control she really has over her own feed.)

What remains is a kind of symbolic abstraction that sits apart from reality, pieced together from snapshots that amount to literal seconds of Britney’s life. But as is the case for any allegorical figure, the accuracy of the depiction is less noteworthy than how it channels the cultural values of a specific time and place. As artists have used Britney’s image to confront various forms of cultural toxicity over the years, their wide-ranging sentiments span compassion, nostalgia, derision, and shame. 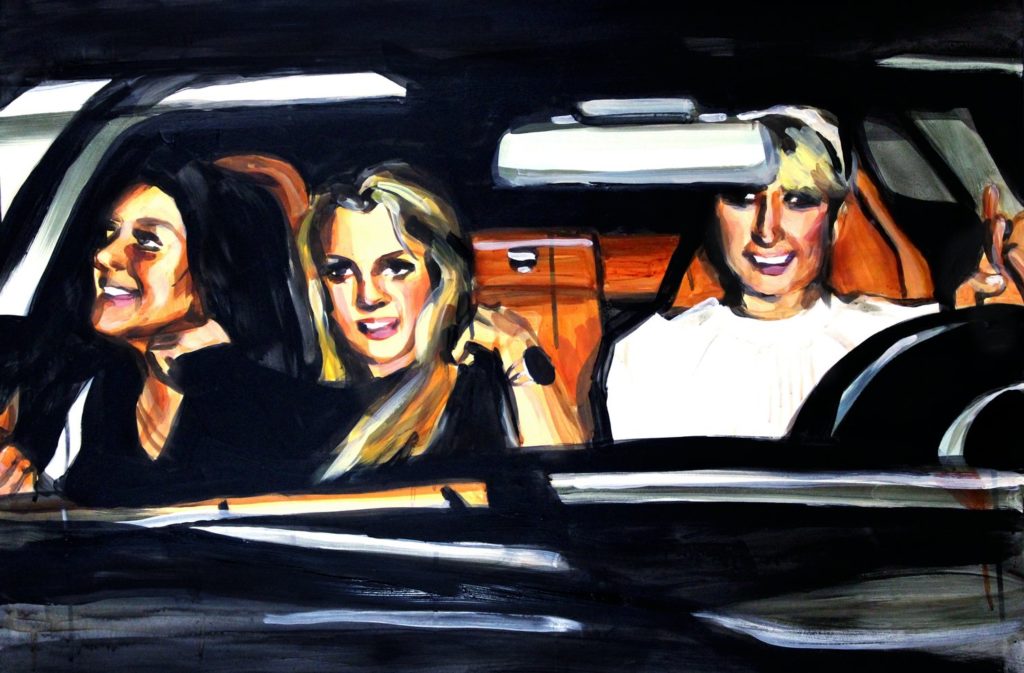 Laura Collins, Lindsay Lohan, Britney Spears and Paris Hilton in a Car. Image courtesy of THNK 1994 and the artist.

Today, arguably almost a decade since her last hit single, Britney’s ongoing place in the headlines affirms her enduring appeal, the scale and divisiveness of which have been met by few others.

“Lady Diana was kind of similar, right?” DuBois wondered, recalling how media obsession eventually ended a princess’s life. But for him, the Britney phenomenon is truly singular.

After the commercial and critical success of his work (Pop) Icon: Britney, which is now in the permanent collection of the National Portrait Gallery, he and his dealer briefly discussed creating an entire series with other celebrities. DuBois ultimately declined, realizing that Britney’s virality is unparalleled.

“I would have had to come up with a whole other reason, another visual language for other people,” he said. “It doesn’t make sense with anybody else.”