As Health and Administrative Hurdles Mount, Some Participants Worry That This Year’s Art Basel Could Become a Very Costly Flop


The postponed edition of Art Basel’s flagship Swiss fair will finally take place in person this month. Normally at this time, just a few weeks out from the fair, organizers would be putting the final touches on the opening party. But in this pandemic year, they are instead scrambling to get their heads around mounting administrative hurdles to bring the long-awaited IRL fair across the finish line.

The fair is capping floor capacity at 12,000 this year, about 20 percent fewer people than in previous years. But as the Delta variant spreads and new health requirements are put in place, the worry these days may be less about restricting visitors than about if they will even show up.

Most people planning to travel to Art Basel this year are already aware of a number of bureaucratic obstacles in place, from completing the Swiss entry form to securing proof of vaccination (or negative Covid tests). Now, visitors to the fair will also have to provide an E.U. COVID-19 certificate, or, for non-E.U. residents, the equivalent Swiss Covid certificate (which requires coordinating with Swiss authorities ahead of arrival).

Meanwhile, news yesterday that Swiss authorities will only recognize the Moderna, Pfizer, and Johnson and Johnson vaccines—and not AstraZeneca—for entry to large-scale events such as Art Basel, caused consternation in the U.K. art world. While those who received the AstraZeneca vaccine in the E.U. will be covered by their E.U. certificate, those who have received the AstraZeneca vaccine in the U.K. will have to repeat a rapid lateral flow test, which will be available at the fair for CHF37 ($40), every 48 hours, or else pay for a (more expensive) PCR test to gain access for 72 hours. 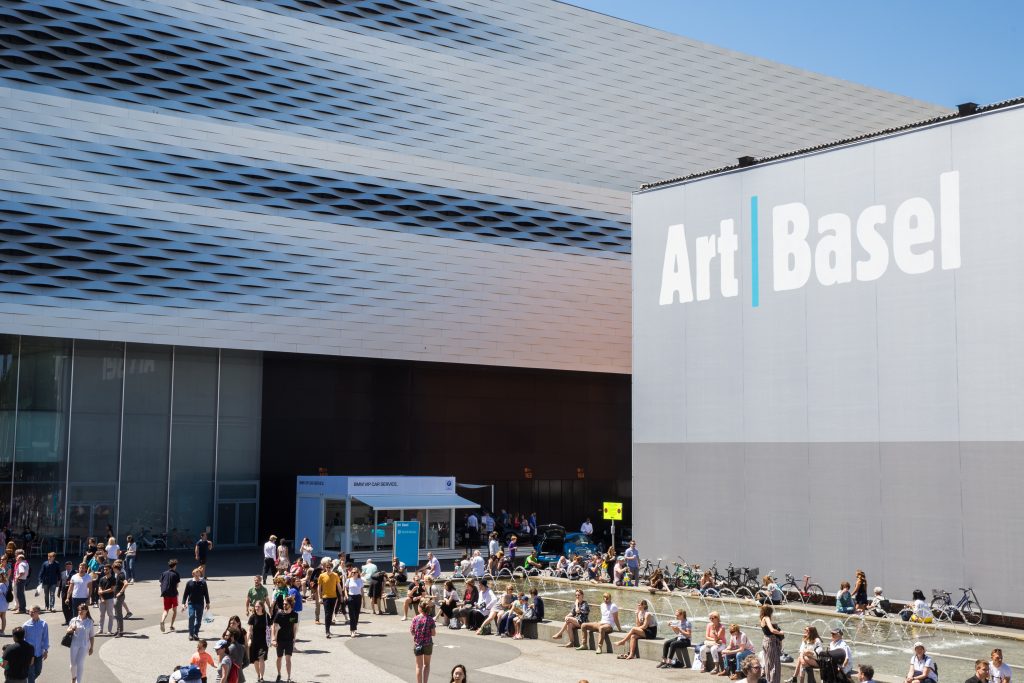 To reduce strain on dealers, the fair has promised to foot the bill for PCR tests for non-E.U. exhibitors who have received the AstraZeneca vaccine. And, if they test negative, they will not have to repeat the test.

Some participants, including the U.K.- and South Africa-based Goodman Gallery and London-based Kate MacGarry, told Midnight Publishing Group News that they were satisfied with the fair’s response to the AstraZeneca conundrum, and said that this development would not impact their commitment to attend the fair.

For others, the vaccine complication is proving to be one inconvenience too many. “I’m afraid the final straw seems to be not recognizing the AstraZeneca vaccine, which means I couldn’t go anyway,” London-based art advisor Wendy Goldsmith told Midnight Publishing Group News. “This is the vaccine that the majority of Brits have had, so it feels like advisors and clients may just have to wait it out for Frieze. The logistics for galleries must be overwhelming.”

While Goldsmith had booked flights to travel to Switzerland several weeks ago, they were recently cancelled by the airline and she has been having trouble rebooking. She also heard rumors that Swiss hotels and restaurants have been turning U.K. guests away in recent weeks because they were unable to recognize the QR code of the U.K.’s vaccination app (though this should be resolved for those who can acquire a Swiss Covid certificate.)

“While the entire art world wants this postponed Basel to succeed, sadly, it may be proving too early, with a perfect storm of problems appearing on the horizon,” Goldsmith said.

“[T]o be frank up front, the current conditions are not what we had hoped for when we rescheduled the fair to September,” wrote Art Basel director Marc Spiegler and head of business and management in Europe Andreas Bicker in a letter to exhibitors yesterday.

They went on to outline some new concessions for participants. Galleries can now withdraw participation and roll over their full booth fees to 2022 in the event that Switzerland introduces new restrictions barring gallerists and staff entry into the country, or entry subject to quarantine. And if any exhibitors feel uncomfortable attending the fair themselves, Art Basel “will mobilize the resources” from its satellite booths to provide personnel.

Organizers also offered the option of staging “ghost booths,” as they did at the most recent version of Art Basel Hong Kong. “Should you wish to convert your booth entirely to a satellite booth, please contact us,” they wrote, adding that they would collaborate on arrangements while reducing the booth fee by 15 percent. 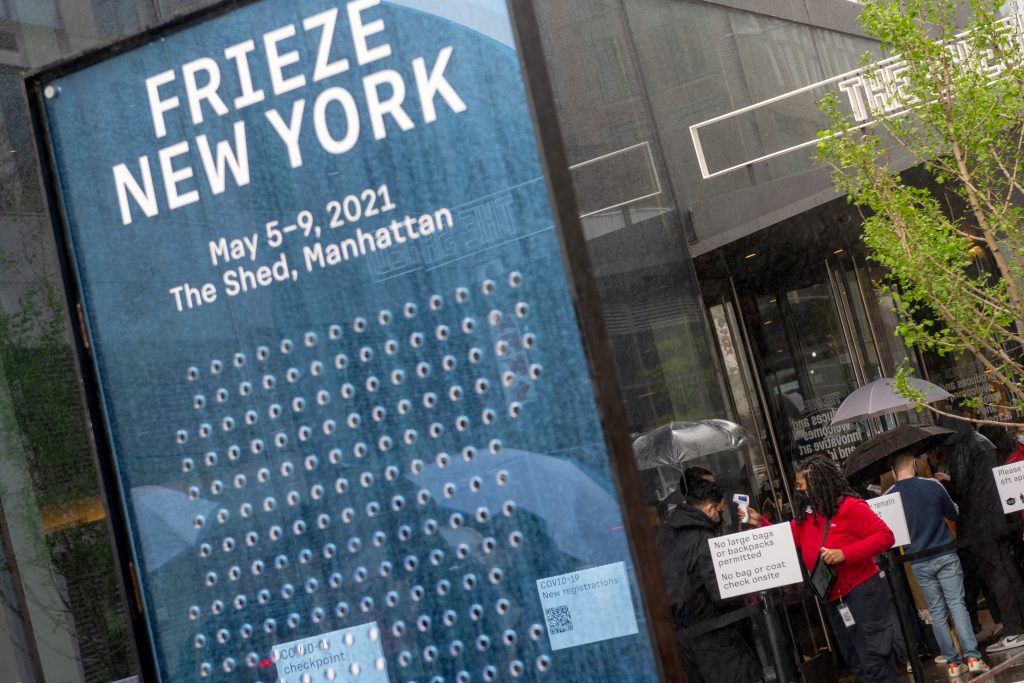 A scaled-down version of Frieze New York was held at The Shed in May. Photo by Alexi Rosenfeld/Getty Images.

While the added health precautions are designed to keep Art Basel from becoming a superspreader event, they inevitably increase the odds that galleries and fairgoers could get tied up in unexpected delays. The more tests that are required, the greater the chance that someone will test positive and be forced into a 10-day quarantine, which will mean prolonging their stay in Switzerland at great expense, not to mention the risk posed to the health of their staff.

“We have a responsibility toward our staff and yet we can’t guarantee they will be O.K., especially at a large indoor event in Europe where there isn’t good mask compliance,” one U.S. gallerist said. (Art Basel has said it will mandate masks throughout the grounds, both indoors and outdoors).

Kate MacGarry said that one way her gallery is trying to minimize risk is through participating in a shared booth with London gallery the Approach as a way to support each other and reduce the numbers of staff on the floor.

Even those who are not affected by the latest changes related to the recognized vaccines have been deterred from attending the fair. Art journalist and author Georgina Adam told Midnight Publishing Group News that while she had initially intended to go to Basel, she has been put off by the travel complications.

“I am double vaccinated with Pfizer, but even so it does seem a lot of administration to enter the fair, plus of course the U.K. has quite stringent requirements for the return, which includes a pricey PCR test,” she said.

Meanwhile, dealers and visitors from the U.S. have been grappling with a hurdle all their own: Switzerland has just been placed on the State Department’s “do not travel” advisory due to rising cases.

“The landscape seems to be shifting daily, maybe even hourly,” U.S. art advisor Megan Fox Kelly told Midnight Publishing Group News. Kelly decided a few weeks ago to give Basel a miss this year because none of her clients were able to commit, citing concerns about the virus or schedule conflicts. She added that she has received numerous emails from other advisors this week looking for people to take over their hotel reservations in Basel.

“I feel for the fair organizers, and even more so for the dealers, who have had to commit a lot of time and resources to make their presentations—and now the audience they anticipated coming may be considerably diminished,” she said.

Some dealers voiced concern that museums would not be willing to take the risk of sending curators or patron groups. “My sense is that U.S. exhibitors are hedging their bets by planning for a reduced presence in terms of inventory and staffing,” a representative for one blue-chip gallery in the U.S. told Midnight Publishing Group News. Others stressed the importance of showing works concurrently in the fair’s online viewing room with the hope that knowing buyers are competing at the live event will add a missing dose of urgency to the online sales.

For many U.S. dealers, the return of the Armory Show in New York is their immediate focus. “As we prepare for Armory next week I’m in a bit of a lather that the [Swiss] fair organizers have not cancelled, same with the rest of the fairs through 2021,” one U.S. gallerist said. “It seems to me that the deal goes like this: the galleries pay a lot of money to bring their artwork and staff to these fairs and the organizers’ job is to guarantee a quality and robust audience. I am worried that they are not going to be able to fulfill their side of the bargain.”