While many of us continue to work from home, we’re checking in with artists about the creativity they’ve been cooking up in their kitchens. Read on for the latest installment in our series on artists’ favorite recipes.

When Nina Katchadourian asked her Auntie Nora—Nora Tour-Sarkissian, technically her father’s cousin—to teach her to make kufteli yaghene, a beloved Armenian soup, the family matriarch was not encouraging.

“She kind of metaphorically raised her eyebrow and said, ‘That is a very hard recipe. Why don’t we start with something simpler?’” Katchadourian told Midnight Publishing Group News.

It was 2010, and Katchadourian, who grew up in California, was interested in learning some of the recipes that her father’s Armenian family had brought over from Turkey, where an ethnic-cleansing campaign carried out by the Ottoman Empire killed up to 1.5 million Armenians between 1915 and 1917. Her own great-grandfather was murdered during earlier riots in the late 1800s.

The violence inflicted on the Armenian people is something that Katchadourian’s family still carries with it. The Armenian Genocide was finally formally recognized by U.S. President Joe Biden in April, just days after Auntie Nora, who was in her 90s, died of cancer.

“I wish Auntie Nora had lived to see it happen,” Katchadourian said. “She lived an amazing life, with a lot of displacement and hardship.” 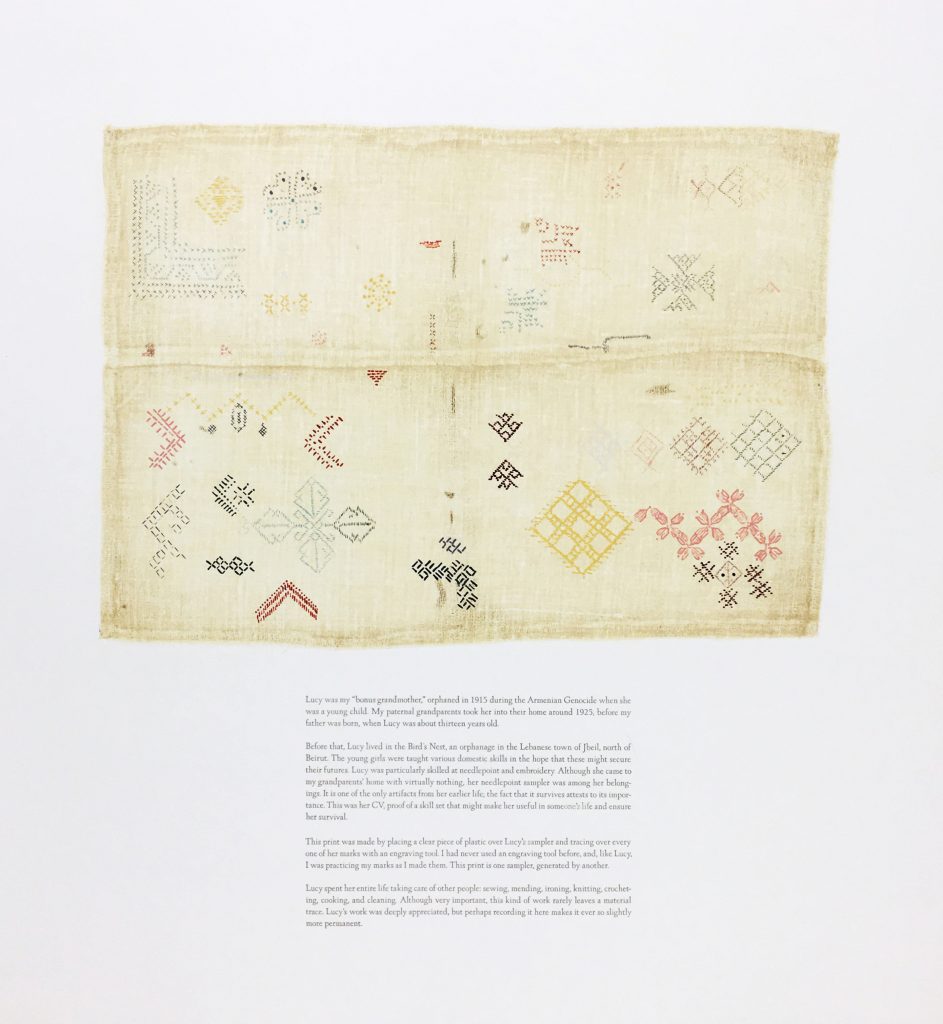 That diasporic family history is also reflected in the artist’s work. “Cumulus,” Katchadourian’s current exhibition at Pace Gallery, includes a print, Lucy’s Sampler, that traces the designs of a needlepoint embroidery made by another family member, an Armenian Genocide survivor adopted from an orphanage by Katchadorian’s grandparents.

“She became one-part older sister, one-part second mother, one-part nanny to my dad,” Katchadourian said. “And to me, she was like a grandmother.”

Lucy made the original sampler while she lived at the orphanage. It hung on Katchadourian’s walls for years before she was inspired to use it in an artwork.

“The piece is a way of paying respect to her skill, calling attention to the trauma in her life, but also acknowledging that her lifelong labor was taking care of other people,” Katchadourian said.

The show also highlights a different kind of family. The Genealogy of the Supermarket (2005–) offers a playful family tree teasing out resemblances between different mascots drawn from supermarket shelves, such as the Sun-Maid Girl, the Gerber Baby, and Chef Boyardee. 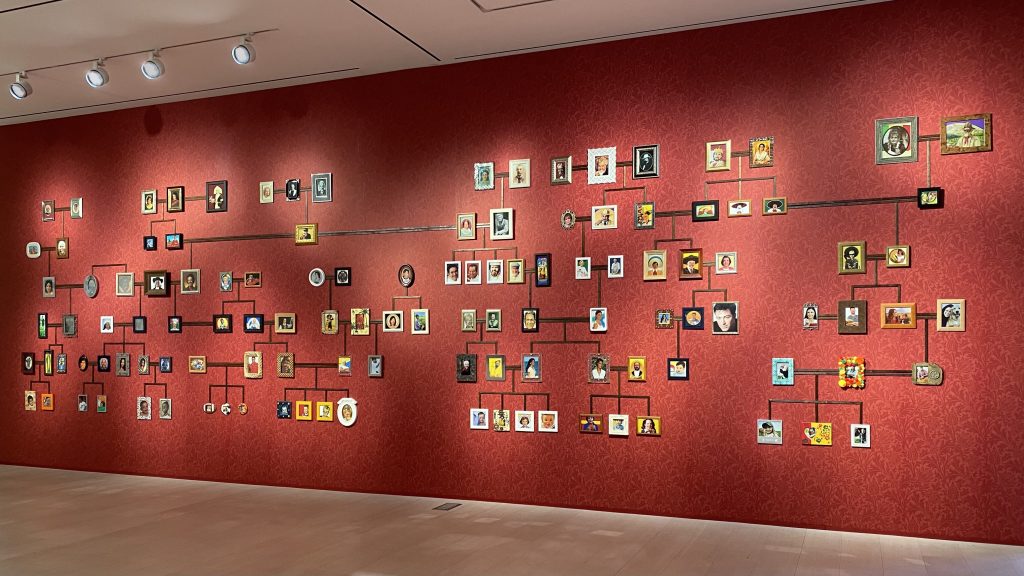 The work was shown at the Armenian pavilion at the 2015 Venice Biennale. For this go around, Katchadourian has added 23 new family members to the tree, which takes up an entire wall.

“It’s a lot of fantasy and matchmaking,” she said. “It’s a funny kind of puzzle to solve.”

But those widely distributed processed foods, many of which promote convenience in the kitchen, bear almost no relation to complex Armenian cooking traditions.

“For my Armenian family, food was a big deal. It was very social and tied into a desire to preserve our heritage,” she said.

Despite Auntie Nora’s concerns, she agreed to host Katchadourian and some friends for what they dubbed “Kufte University.” Typically a term for meatballs, the dish’s delicate, meatless kufte have a bulgar wheat shell and a butter and walnut filling, served in a yogurt-mint both with chicken or lamb.

“When the kufte are floating around in the soup and you cut into them, they release the butter and you get this delicious burst of buttery flavor,” Katchadourian said.

Preparing them proved to be a tall order.

“To make them requires a tremendous kind of dexterity,” she explained. “You put a lump of bulgar wheat paste in the palm of your hand. And then, with this very particular gesture, you stick your thumb into that lump and turn it so that gradually you create a hollow space inside the little ball for the walnut and the butter.” 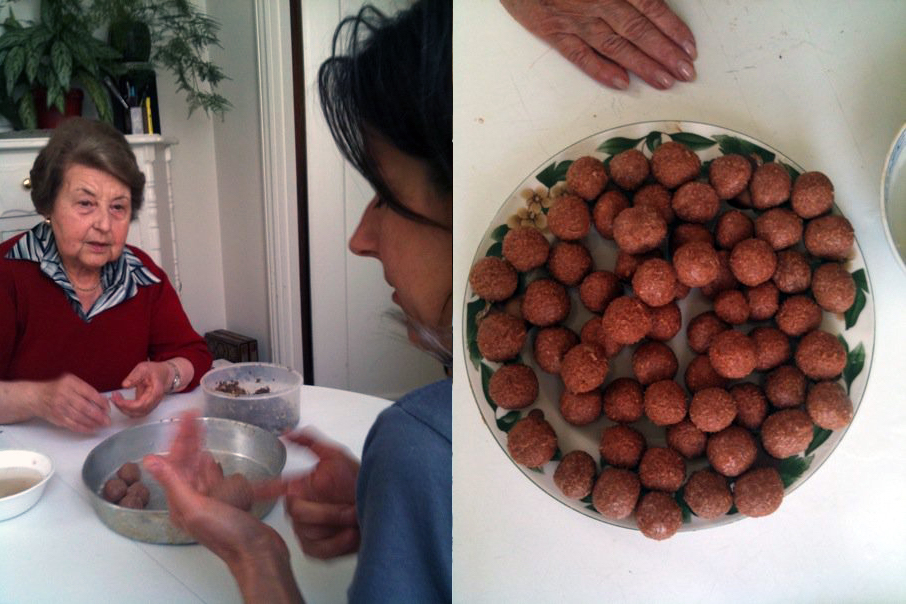 “If you’re an expert like Auntie Nora, you have a perfectly shaped ball. And if you’re like me or my friends, you create this thing that just falls apart in your hand,” the artist said. “She kept just shaking her head, going ‘wrong, wrong, wrong.’”

But after hours of labor, they were able to enjoy a treasured family recipe.

“It was really a gift to sit there, eat the soup, and know how much had gone into it,” Katchadourian said. She sees the dish’s complexity as a reflection of an earlier time, when such time-consuming labor it the kitchen was expected of women.

A couple of years after the lesson with Auntie Nora, Katchadourian attempted to recreate the soup with friends in Brooklyn.

“It was definitely not Auntie Nora-level soup,” she said. “But I reported back and she was very encouraging and sweet about it.” 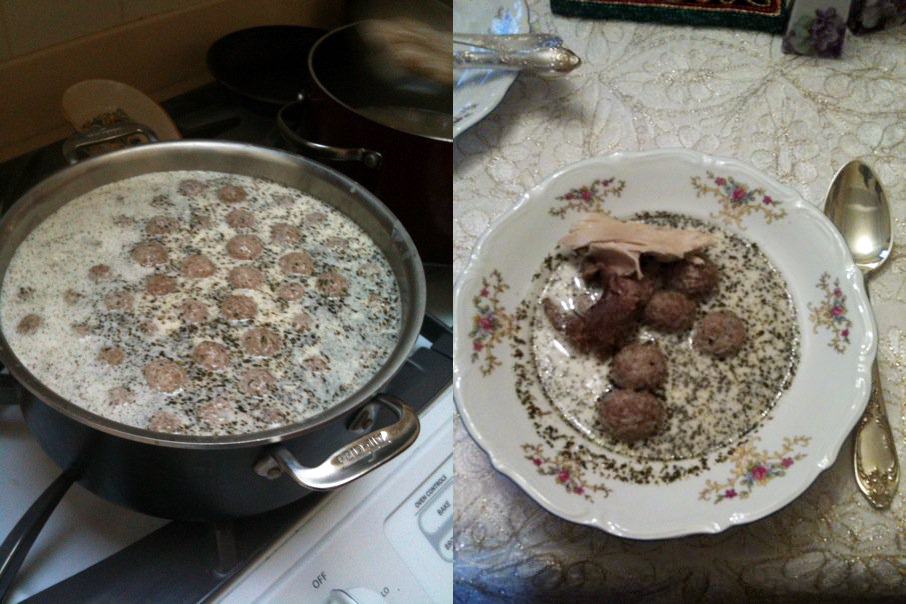 The artist never did get a written recipe.

“You don’t measure anything. It’s just done through this deep experience,” Katchadourian recalled.

Instead, Katchadourian suggested Midnight Publishing Group News share with readers a pair of videos she tracked down on YouTube giving instructions on how to prep the dish—an appropriate homage to the oral tradition of passing down such recipes from generation to generation.

“Note that this soup is so complicated that it requires a second video to make the soup base part,” she warned