If you have ever been a young woman, Anna Weyant’s works will feel eerily familiar.

The 26-year-old paints her baby-faced subjects as they roll through the motions of daily life—enduring heartbreak, doing pilates, stuffing bras, and finding strangeness in their own faces while passing a mirror. Like so many in that stage of not-yet-womanhood, her figures put great energy into outward appearances while keeping their interior lives at bay.

Everything is fine, projects a posturing, grinning girl—who looks remarkably like Weyant, though the artist has said it isn’t her—in one work. She chats over a glass of wine with a friend, coolly resting her head on a bent wrist encircled by a pearl bracelet.

It is this brand of, as Weyant calls it, “low-stakes trauma” of girlhood that interests the artist. Her sometimes-frightening ability to capture these experiences in ways that resonate with fully grown women has made her one of the most sought-after young artists working today. 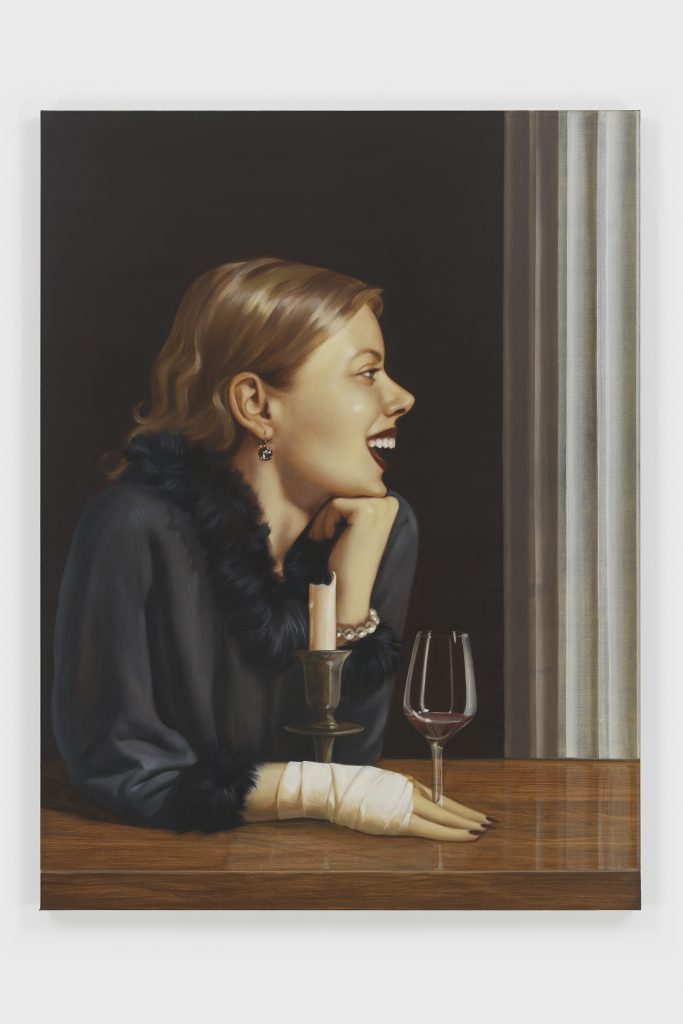 Weyant’s work “doesn’t rely on knowledge of insider references, but it kind of has a language that can be widely understood, widely legible,” said George Newall, cofounder of Winter Street Gallery in Edgartown, Massachusetts, which is presenting a sold-out show of Weyant’s drawings (through September 26). “We’ve witnessed that in peoples’ reactions and in the spread of where people are writing from, which is really global—every continent that I can think of.”

Weyant’s admirable technique is inextricable from her subjects: her luminous compositions recall Dutch Golden Age masters and 20th century painters of the corporeal and surreal like Balthus and John Currin. Through Weyant’s eyes, these subjects are unsettling—but not in a voyeuristic way as much as a knowing one.

“I didn’t have the tools to process these sorts of experiences when I was living them, at those ages,” Weyant said last week from her apartment on the Upper West Side. As she reflected on her adolescence, “I started going back and saying to myself, ‘That was really weird,’ or ‘That was really funny.’ It became therapeutic.” 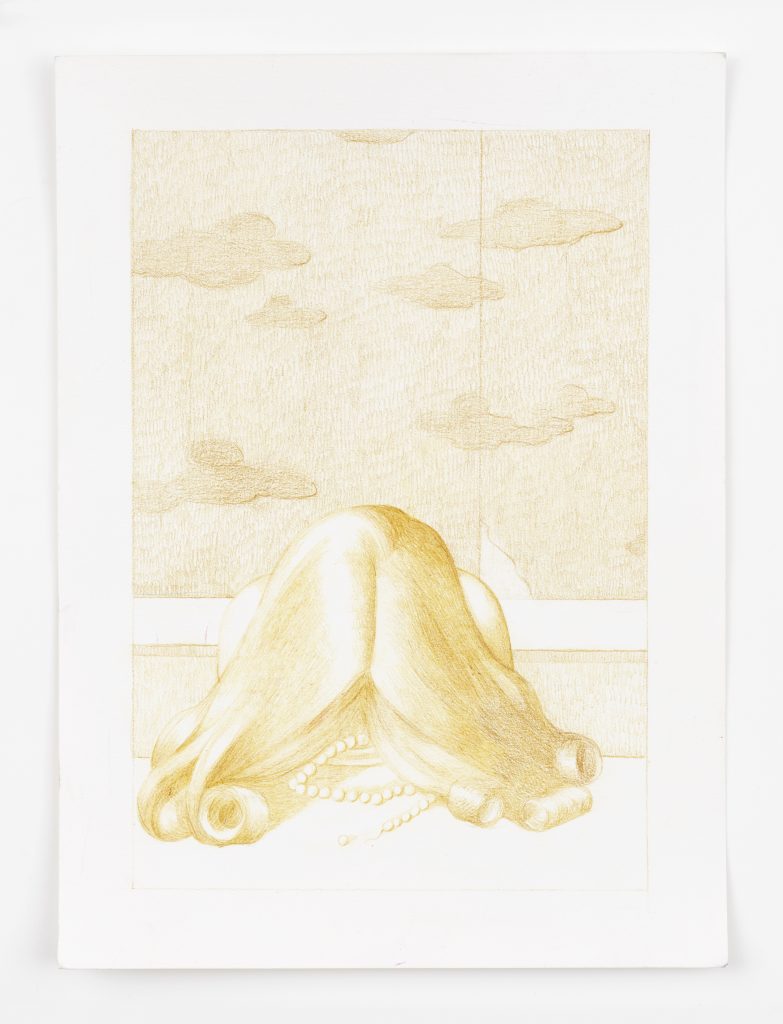 From Being a Girl to Painting Them

Weyant grew up in Calgary, Alberta, in Canada. She describes her childhood as “idyllic in a lot of ways,” spent with her parents, her brother, and their dog. She did not have much exposure to art, although her early years inspire much of her work now. “It’s something I’ve been going back to through art over the last few years,” she says, “my childhood and teen years and getting to where I am now.”

Where she is now is a fast-rising artist who landed in New York after studying painting at the Rhode Island School of Design. Following graduation, she spent the summer as an event planner for Lincoln Center (“It was great, but I just could not do the 9 a.m. mornings,” she says).

After that, she took a sharp turn back to art, studying traditional painting at the China Academy of Art in Hangzhou for seven months. “I really loved being there,” she recalls. “I just could not get a grasp on Mandarin, so I had to finally call it.”

After China, Weyant moved back to New York, where, with the help of a former professor, she secured a job as a studio assistant. It was a time that she describes as “fresh and glittery” but also discombobulating, marked by foggy subway rides and long hours.

She would return home every evening to paint in the Upper West Side apartment she still lives in, despite the light having gone out and the better work hours spent. “I remember it being fun, but just kind of a little depressing,” she says. 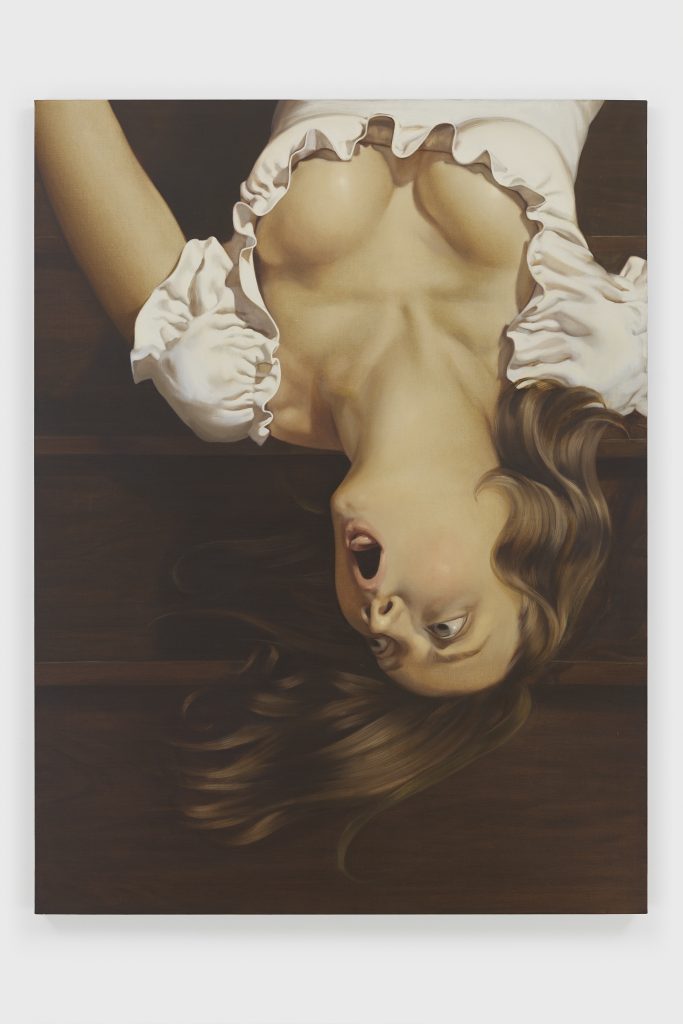 The artist she was assisting (whom she doesn’t name) introduced her to what would become her gallery, the hip downtown star-maker 56 Henry. Her first solo show opened there in fall 2019.

Entitled “Welcome to the Dollhouse”—a reference to Todd Solondz’s 1995 tragicomic film about a teen who suffers a series of humiliating misfortunes while trying to fit in at school—the show centered on depictions of a literal dollhouse occupied by a group of young girls. The dollhouse in the paintings is modeled after one that Weyant had as a child.

“I just recently found this old diary that I had written when I was like 13,” Weyant tells me, reflecting on the little injustices of youth she loves exploring. “And like every other 13-year-old, I was a monster in so many ways. One of the entries said something to the effect of, ‘I had just been asked out by some boy, and then the next day he dumped me, and he was the love of my life and I was so heartbroken.’ And then I signed it by saying this girl—we’ll call her Stacey—’looked so fat today.’ Then, ‘Xo, Anna.’ Woe is me, I have this horrible breakup and then I burn someone down in the same breath.” 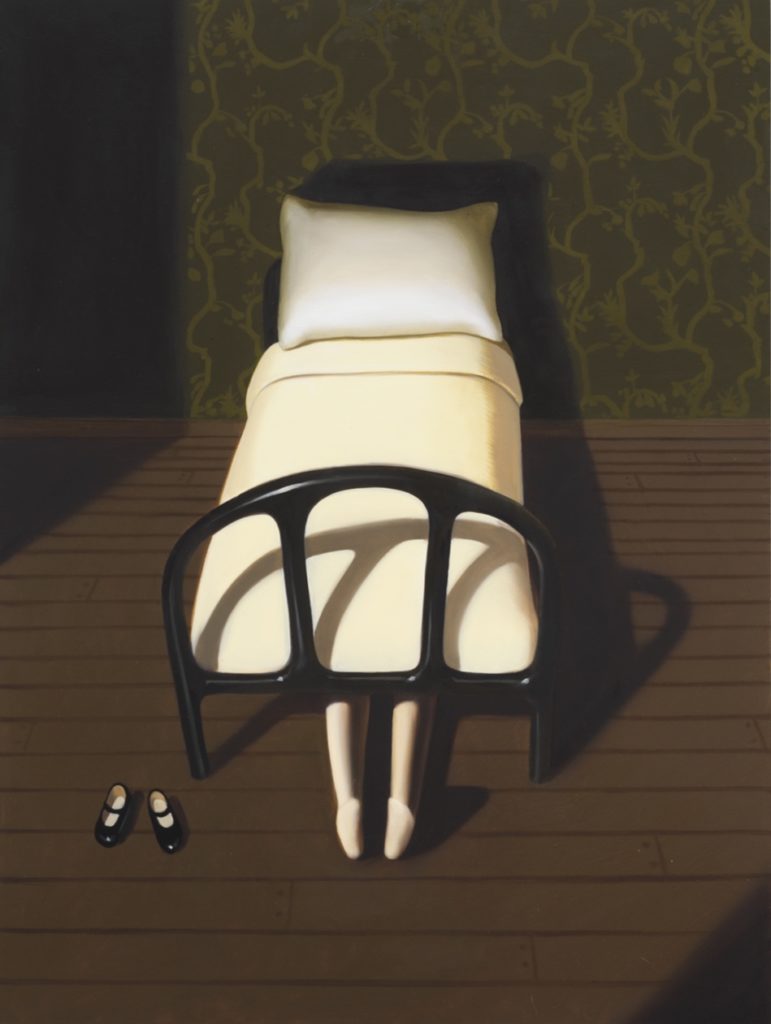 Weyant’s outing at 56 Henry earned her invitations to show at other high-profile galleries. This spring, an exhibition of paintings at her new Los Angeles gallery Blum & Poe, titled “Loose Screw,” sold out. In an interview with the dealer Bill Powers, Weyant notes that her mother chided her for the title, saying, “Honey, don’t ruin your show with such an ugly name.”

But the knife edge between sweet and sour, beautiful and foreboding, is where Weyant’s art lives. Her latest body of work, informed by the malaise that tints many memories of spring 2020, reflects lives lived with a little less color. Her figures are rendered with claustrophobic yellows, inky blacks, and army greens.

Weyant has cited influences as wide-ranging as painter Ellen Berkenblit’s screaming woman series, Frans Hals’ Two Boys Laughing, cartoons from the New Yorker and the Grinch, as well as a particularly gruesome book by Edward Gorey. (“It’s an ABC book, but for different ways that children die,” she says matter-of-factly.)

Her unique perspective has found an eager audience—and driven considerable demand. Like many young artists, Weyant feels ambivalent about her fast-rising prices at a moment when she’s still finding her feet artistically.

“I’m starting to see a lot of resale,” she says. “Things that I sold 10 months ago for $2,000 being sold for much, much, much more than that. It’s hard not to feel in some ways betrayed because I feel like I’ve given up this thing that was very intimate. But it was in exchange for money so… I don’t know.” 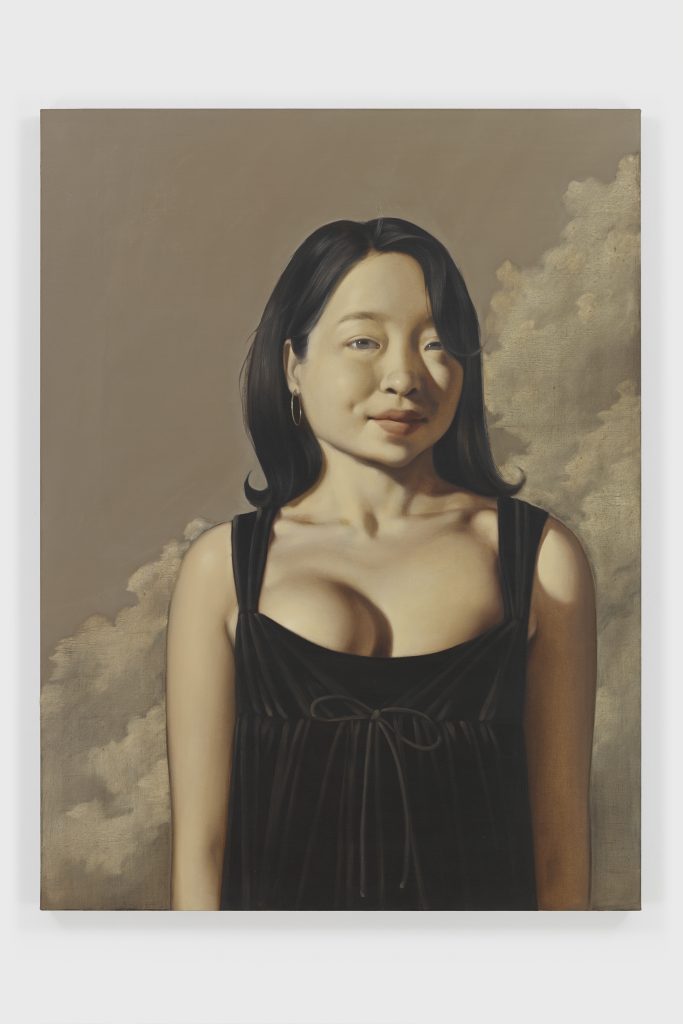 Weyant’s gallerists at Blum & Poe and Winter Street Gallery declined to share price information at the request of the artist. A crayon-on-paper portrait she donated to New York’s Drawing Center this year lists its retail value as $10,000, though her work has already brought more than twice that at auction. Her first and only work to hit the block fetched $27,720 at a Phillips day sale in June, almost four times its high estimate.

“There’s this element of selling myself or selling something that is very important to me that then becomes a stock or currency of sorts, and I don’t have any control over it,” Weyant says. “That’s a new anxiety for me.”

This trend, Weyant knows, will likely only continue. At the same time, she and her team are doing what they can; George Newall of Winter Street said that putting the work in “thoughtful places” is an “important part of the mission,” especially since they could have sold each work in the current show “many times over.”

Blum & Poe declined to share the size of the wait list for Weyant’s work, but did not deny its existence. “Her practice is just getting started, with an exciting career unfolding ahead,” the gallery said diplomatically in a statement. “Given her talents, there are many great collectors worldwide seeking out her work.” 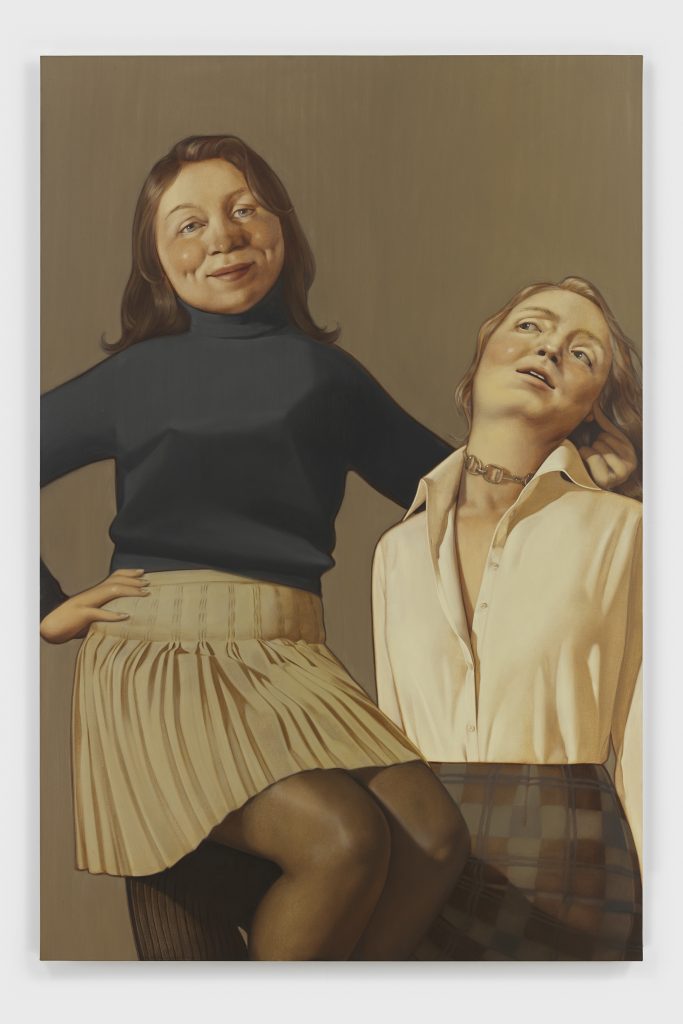 When I ask what’s feeding her artistically at the moment—what’s breaking through the interminable blur of the last year—Weyant tells me about Lifetime movies.

“They’re incredibly problematic, but I’m fascinated by them, the strangeness of white America,” she says. “They’re always set up the same way. There’s always an opening with a woman sitting with a glass of wine, and then there’s some murder.” She considers the “fear of a foreigner coming to town” that drives these films to be “very American.” It’s something she is turning over in her head as she plots new work.

As a white woman, Weyant says she has spent the past year thinking about her privilege, the “frivolity” of her paintings, and the act of being a painter in general. These concerns, she suspects, just might push her work around a corner. She is considering leaving behind the indignities of early adulthood to explore the more adult problems that plague white America. (One of her newest paintings reworks a scene from the film American Psycho.)

“I feel like I’ve dipped my toe in there, in these newer themes, and the water’s been too hot and I just want to figure out the best way to approach it,” she says. “So I’ve been walking around the edge of it. And I hope to get there.”