In her new book, Twelve Paintings, scholar Tal Sterngast explores Berlin’s Gemäldegalerie, which is known for an exceptional collection of European paintings. She lands on twelve paintings from the collection and investigates the story behind them through important questions of today. In this chapter, called “The Creativity of Women,” Sterngast looks at the legacy of prominent French portraitist Élisabeth Vigée Le Brun, one of the few women artists in the Berlin state collection, asking what paradoxes exist within art that is made by women.

Born in 1755 in Paris to a painter and a hairdresser, Elisabeth Vigée-Lebrun achieved success in France and Europe against the norms of the time during one of the most turbulent periods in European history. Her father, who recognized the daughter’s talent and passion early on, died when she was 12. In her feminist essay “Why Have There Been No Great Women Artists?” from 1971, the art historian Linda Nochlin noted that, denied access to workshops, academies, or universities, almost all women artists known to us before the 20th century had a father in the profession.

From around 2,800 paintings in Berlin’s Gemäldegalerie collection made north and south of the Alps between the 13th and the 18th century, 15 were painted by nine women. With the exception of Italian Renaissance painter Sofonisba Anguissola, all of them came from the northern countries and lived around the 18th century. Vigée-Lebrun learned to paint by looking at and copying art in Paris, and began working as a portraitist in her youth, supporting her widowed mother and brother for a time. Soon after encountering Marie Antoinette, she became her court painter, the first woman to attain this rank. Admitted to the Académie Royale de Peinture et de Sculpture (Royal Academy of Painting and Sculpture) at age 28, she became one of only four women members and one of the leading portraitists of the ancien régime.

Neither boy nor girl, neither adult nor child; not completely human, animal, or divine, the prince holds a laurel wreath demonstratively in the air. It is an opening waiting to be breached, whereas the phallic quiver of arrows laying partially concealed at his feet is a latent weapon, a possible complement to entering the ring. Echoing this potential intercourse or coupling, the prince’s winged figure hybridizes classic mythology with Jewish-Christian motifs. Cupid-Eros—the mischievous god of love equipped here with arrows but no bow, a reminder of the ancient knot that ties love with a wound—is combined with a Judeo-Christian angel: a cherub or seraph. The two cherubim in rabbinic literature are described as human-like entities with wings, placed on the opposite ends of the Ark of the Covenant in the inner sanctum of the temple, containing the two stone tablets of the Ten Commandments. Representing a threshold between profane and sacred, between the given world and the one beyond, they guard the law. Higher in ancient Judaism and Christianity’s hierarchy of angels, the seraphim announces the sacred name of God and its distinction from its creations. These winged creatures separate and connect human and divine, man, and God. 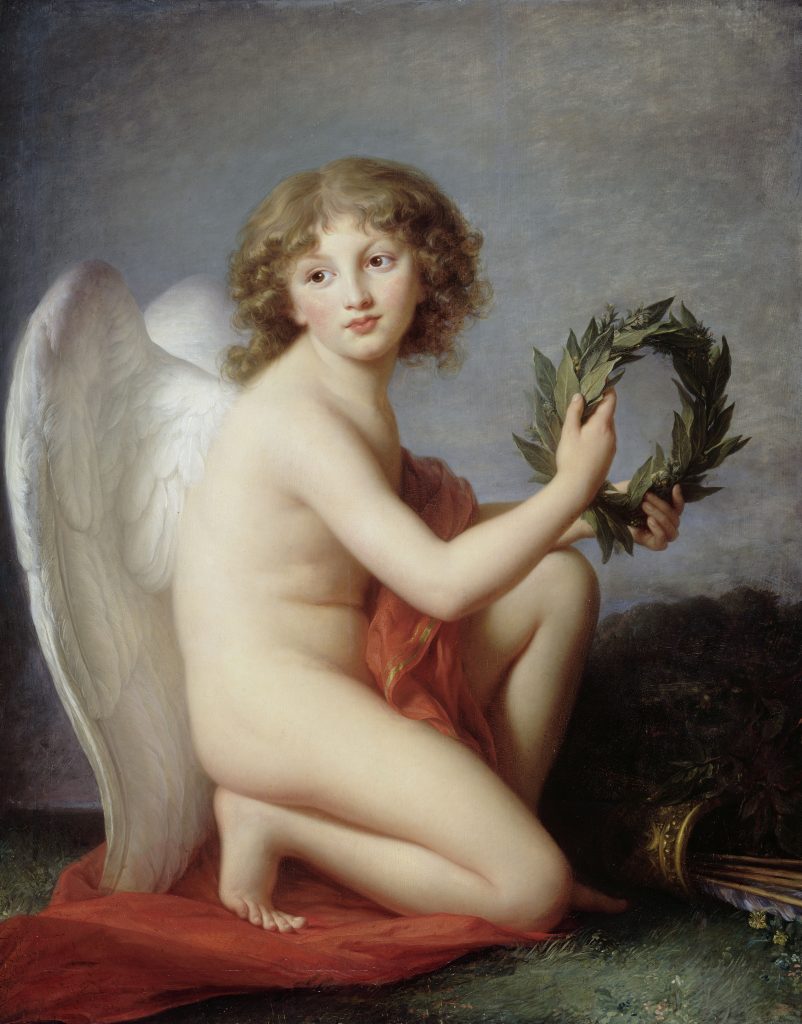 In Western iconography, the distinction between seraph and cherub echoes the broad division between faith and reason; cherubs, the former; seraphs, the latter. Cupid as cherub thus takes the pagan idea of a demigod and superimposes it on the Catholic notion of an angel of the sort linked with encouragement to faith as opposed to reason; the latter would be the seraph’s concern. The hybridization of Cupid and cherub may therefore point to an aspiration of synthesizing desire and faith. Could it be that the little prince’s androgyny, with the ambiguities or thresholds it captures, reverberates the zeitgeist of drastic transformations? The revolutionary program of the period was marked by—or part of—a secularization of the divine, the exchange of the metaphysics of religion with revolutionary ideas and the loss of the sacred. What exactly was Vigée-Lebrun idolizing in her Lubomirski portrait?

The genius of love, disguised in a portrait of a boy, not only evokes a sense of immanentization (as Greco-Roman gods often do, anthropomorphized and restlessly intervening in human affairs) but also implies a certain diffusion or inversion within the active/passive oppositions of man and woman, artist and model, subject, and object. As a portraitist at a time when women were denied apprenticeships and forbidden from drawing nudes, Vigée-Lebrun was aware of the power relations inherent to the gaze. In her memoir, she admits to flirting with her male sitters: “As soon as I observed any intention on their part of making sheep’s eyes at me, I would paint them looking in another direction than mine, and then, at the least movement of the pupilla, would say, I am doing the eyes now.”

Even when women were already officially permitted at the School of Fine Arts in Paris (and in other European art schools) much later at the end of the 19th century, they were still not allowed to copy the naked body. That undressed, to-be-painted body was not only standing for painting itself and the speculation of a passivity/activity dichotomy, but also to the question of truth, the naked truth. That was the time when Friedrich Nietzsche stressed how much the questions of art, style, and truth can not be dissociated from the question of the woman. An answer to the question “what is woman” cannot be found in any of the familiar modes of concept or knowledge, he noted. Yet it is impossible to resist looking for her. Men, asserts French philosopher Geneviève Fraisse, didn’t want women involved in the question of beauty, because it is married to the question of truth. It belonged to men. Copying the naked body, therefore, is also about gaining access to the truth.

Is there a difference between feminine and masculine creativity? And if there is one, how is it to be argued? Nochlin’s essay laid ground for a feminist methodology in art history, claiming that this question was the wrong one to begin with. Acknowledging that “there were no women equivalents for Michelangelo or Rembrandt, Cézanne, Picasso, or Matisse, or even for de Kooning or Warhol,” she made the point that the fault lay not in women’s genetics, but rather in institutions and education. As well as that art is not a means of pure self-expression but rather something that involves a self-consistent language of form, given conventions, which must be learned through teaching or individual work. Women were consistently and systematically denied access to both. In addition, she criticized the myth of the innate genius as an atemporal and mysterious power, embedded in the person of the great artist, a godlike figure.

While Nochlin and much of feminist art history after her rightly stressed the importance of the institutional over the individual, the question that is asked too little today is not whether women can make art or not anymore, but if and how women can be creative without adopting masculine attributes, without being creative like a man. Does the fact that there is no female style in the works of great women artists from Artemisia Gentileschi to Agnes Martin mean that there’s nothing in common among women artists? Can a woman artist define art anew in radicality like, for example, Diego Velázquez, Marcel Duchamp, or Andy Warhol, or is it a different game altogether? Can the creativity of women extricate itself from the metaphor, from being an image; one that belongs to the sphere of mere appearances and temptation, but also to nature and motherhood? 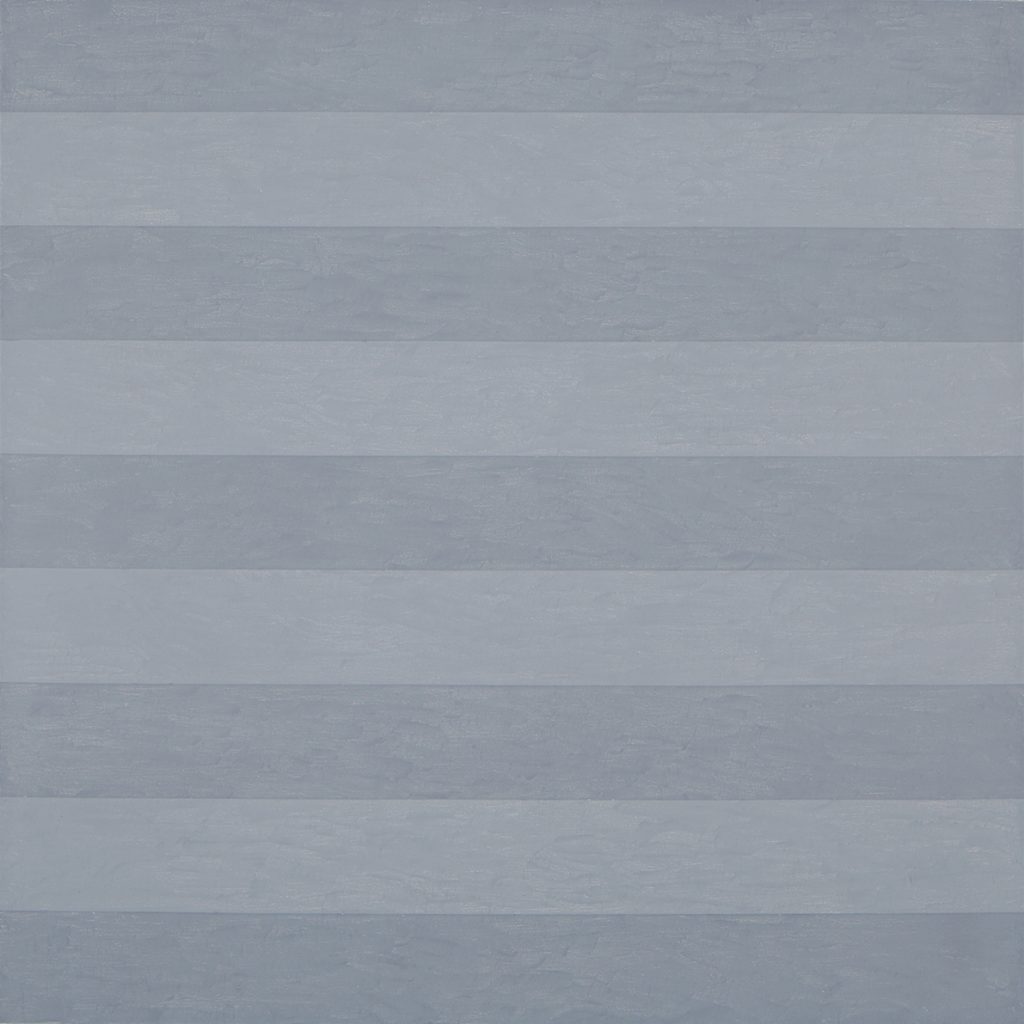 Between its two facets—the monstrous imagination of an endless birth-giving, as opposed to a suffering of being as endurance, in absence—what are the paradoxes within which art is made by women? Corresponding to the former is much of performance art by women since the 1970s, which relates to taboo aspects of bodies: menstrual blood, childbearing, excrement, internal organs; or, differently, art made by and after Louise Bourgeois’s surrealism, vividly feeding off trauma and lending unconscious visual tropes (stairs, spiders, cages) meaning that is both narrative and therapeutic. In correlation to the latter, one can think of Agnes Martin’s repetitive grids that achieve “not what is seen, but what is known forever in the mind” unfolding contemplative states of existence. Or Vija Celmins’s detailed drawings and paintings of starry skies, spider webs, or the ocean as surfaces of spiritual solitude and retinal allure.

If the domain of modern art and artifice is understood as a substitute for fecundity, an outcome of a creativity which is in its essence masculine, what art can be made in fertility? Asking this question might risk all that women’s fight for equality has accomplished. However, not asking it might be denying the potentialities of art made by women as something that can best be described as total otherness in this given, androcentric world.

Tal Sterngast studied photography and film in Jerusalem, London, and Berlin. She has published numerous essays and articles about contemporary art and film in international newspapers and art magazines. She has organized several exhibitions. Her new book, out now in English and in German with publisher Hatje Cantz, is based on the article series Alte Meister, published in the weekend supplement of die Tageszeitung from 2017 until 2019.