The proceeds of the sale of the painting, which approaches Beeple’s headline-making $69 million NFT sale from earlier this month, are set to benefit Dubai Cares, Unicef, UNESCO, and the Global Gift Foundation, according to ARTnews.

The eye-popping figure comes at a moment when unfamiliar names are drawing heftier public prices than longtime blue-chip figures like Gerhard Richter and Damien Hirst. The demand has been driven largely by cryptocurrency-flush investors. The buyer of Jafri’s work is French crypto businessman Andre Abdoune.

Painting the piece, which measures 17,000 square feet—covering an area roughly equal to six tennis courts, four basketball courts, or two football fields—took Jafri eight months, sometimes working 20 hours a day at the Atlantis, the Palm hotel in Dubai, while it was in lockdown. 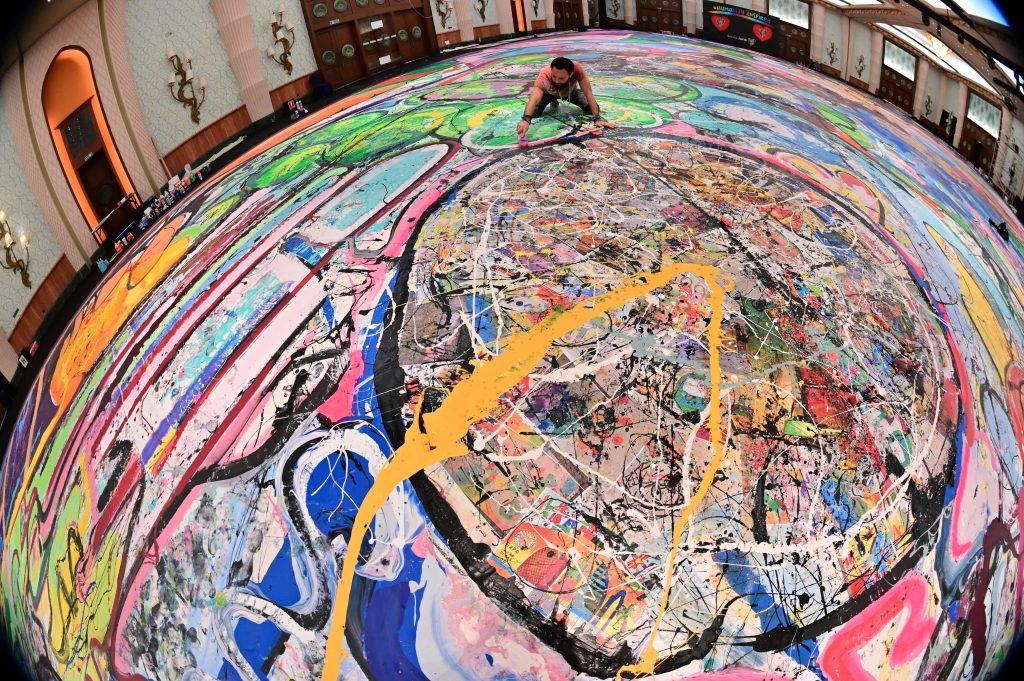 Sacha Jafri working on his record-breaking painting entitled The Journey of Humanity on September 23, 2020. Photo by Giuseppe Cacace/AFP via Getty Images.

“I was stuck in Dubai and I wanted to create something poignant, something that would mean something,” Jafri told CNN.

The record-setting finished product was verified by Guinness as the “Largest Art Canvas” in September and unveiled in February, with selections from the painting currently on view at Leila Heller Gallery in Dubai. (Neither the artist nor the gallery responded to Midnight Publishing Group News’s request for comment by press time.)

Jafri purports to have already raised $60 million for charity through the sale of his art over his 18-year career, reports Emirati outlet the National. His collectors include US president Barack Obama, members of the British royal family, Richard Branson, Paul McCartney, David Beckham, George Clooney, and Eva Longoria. 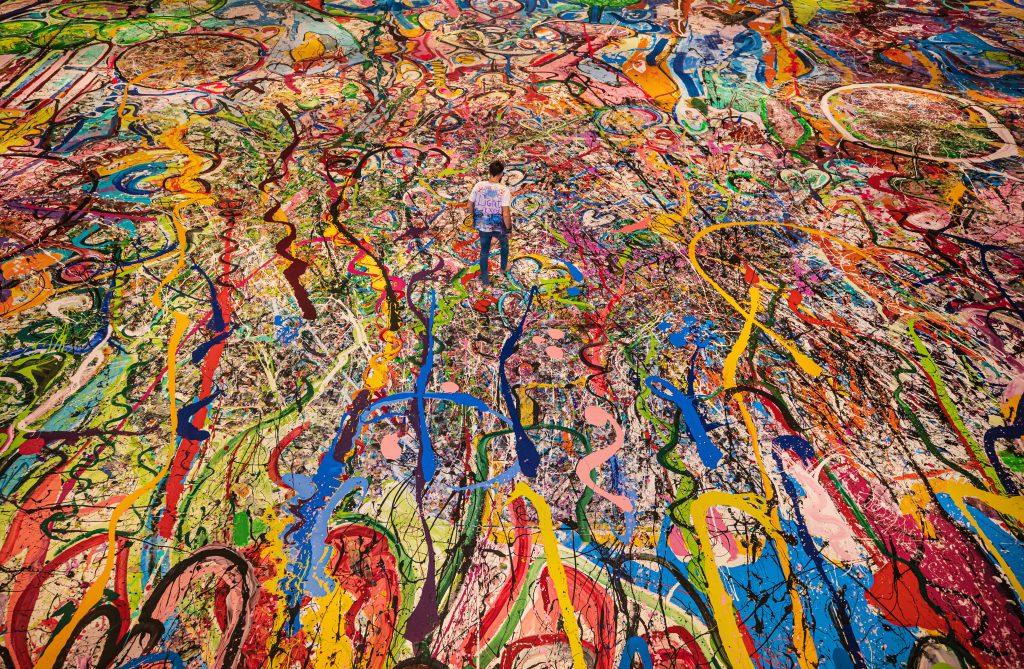 This painting is inspired by children’s artwork, with Jafri soliciting drawings from kids around the world about their experiences during the pandemic. The 44-year-old artist got submissions from over 140 countries, addressing themes of both isolation and connection.

It was also physically demanding work, with the artist constantly bending over to paint on the floor of the hotel ballroom. Jafri injured his pelvis and feet, and had to have emergency spine surgery. Still, he persisted, with the ultimate goal of raising $30 million for charity. 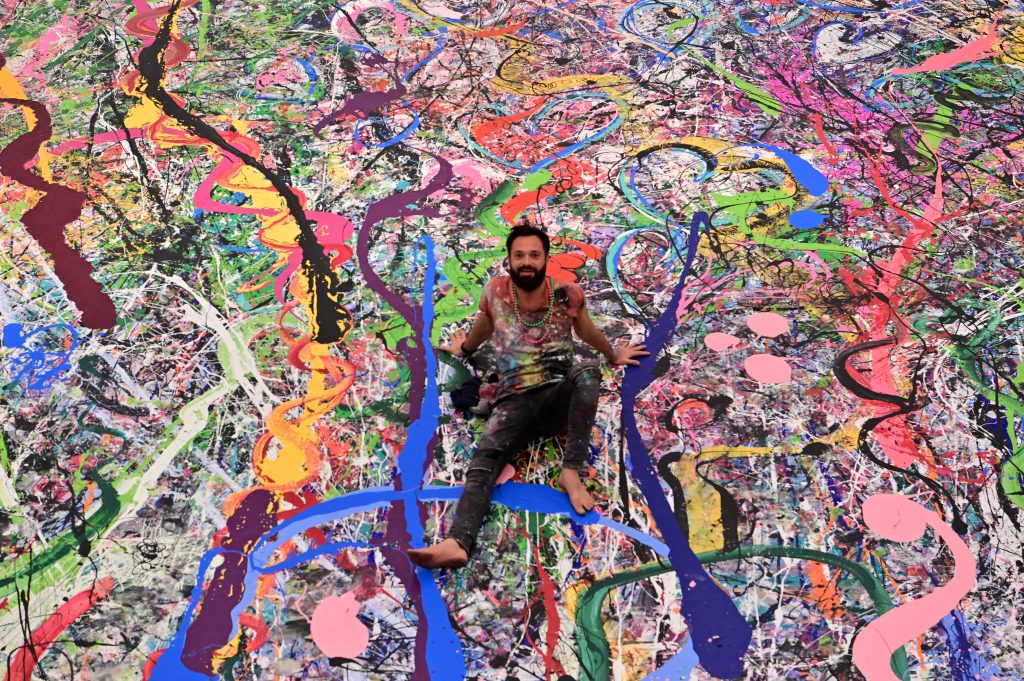 Sacha Jafri working on his record-breaking painting The Journey of Humanity. Photo by Giuseppe Cacace/AFP via Getty Images.

In the end, Jafri more than doubled that total thanks to the buyer, Andre Abdoune, chief executive of Altius Gestion International Holding. At the auction held at the Palm, he agreed to purchase the entire piece, which Jafri had originally planned to sell in 70 smaller sections across four auctions.

“I come from a poor family, and I knew at times how it feels to have nothing to eat,” Abdoune told Agence France Presse. “The painting was very powerful when I saw it, and, for me, it would have been a mistake to separate the pieces.” 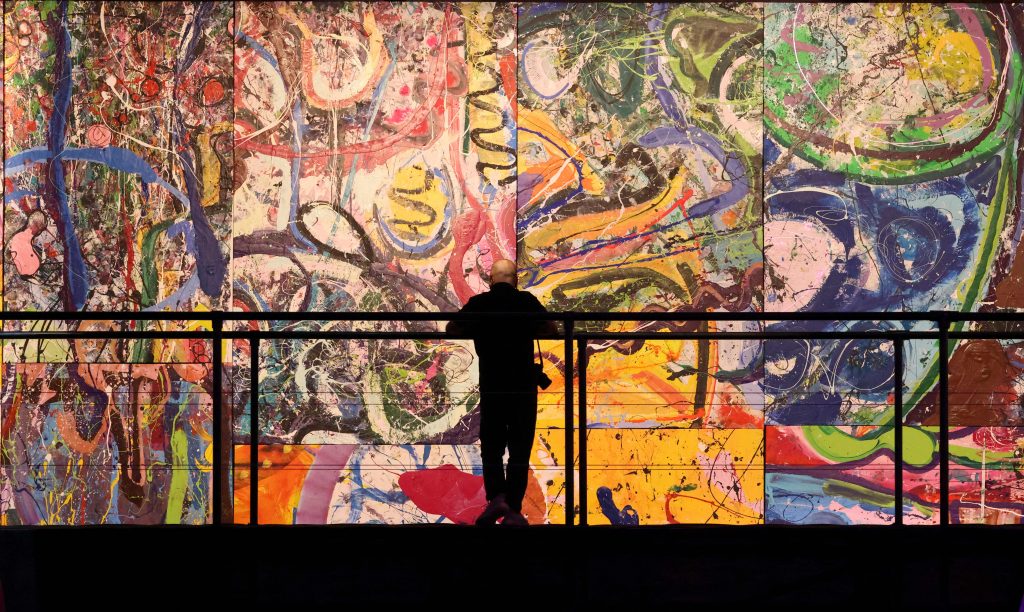 A visitor stares at fragments of Dubai-based British contemporary artist Sacha Jafri’s painting The Journey of Humanity on February 25, 2021. Photo by Karim Sahib/AFP via Getty Images.

Adboune plans to build a museum to house the painting, and to set up a charitable foundation with Jafri, according to the BBC.

Previously, Jafri’s high-water mark at auction was just TWD$2.16 million ($70,745), for a 2019 auction at Ravenel in Taiwan, according to the Midnight Publishing Group Price Database. That painting, of course, was measured in inches, not sports facilities.

“Sacha Jafri: The Journey of Humanity and 18 Year Retrospective Collection” is currently on view at Leila Heller Gallery, Dubai I-87, Alserkal Avenue.