17 Marvelous Highlights From the 2021 Venice Architecture Biennale, Where Hope and Optimism Abound


After a year’s delay, the 17th Venice Biennale of Architecture opened last week with a sprawling series of exhibits, including a central exhibition, 61 national pavilions, and more than a dozen collateral events.

And despite the difficulties of the past 18 months, the show (titled “How Will We Live Together?” and curated by Hashim Sarkis, dean of the School of Architecture and Planning at the Massachusetts Institute of Technology) remains upbeat.

“At this moment, we are tired of dystopias,” Sarkis told Architectural Record. “We were looking for signs of hope and optimism, and we found a lot of it.”

Here is a round up of some of the biennale’s highlights.

Exhibits From the International Exhibition 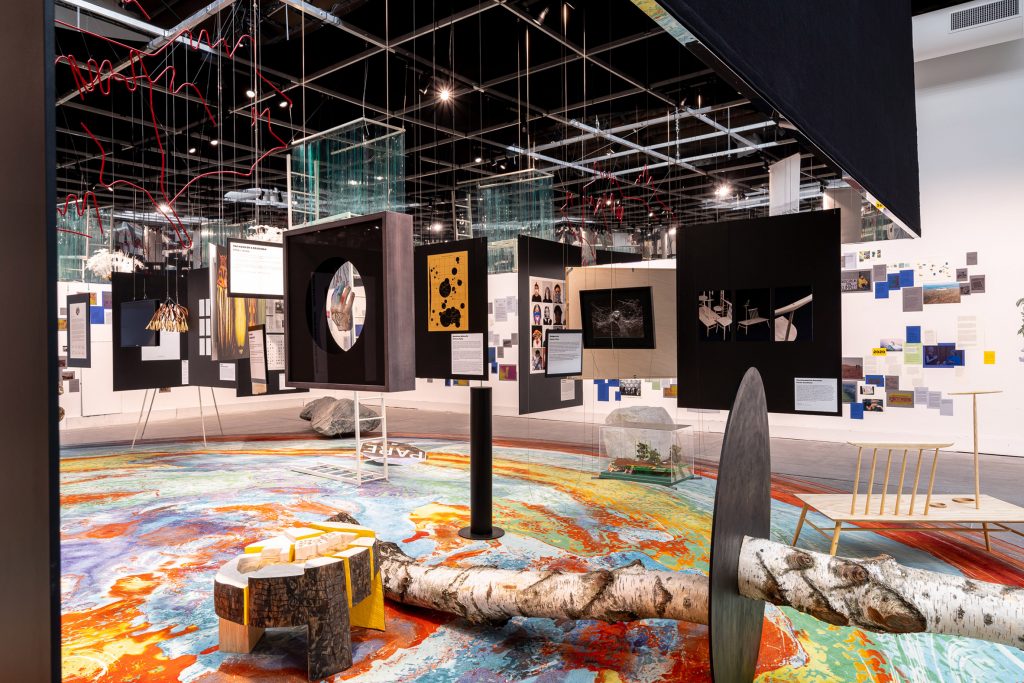 Studio Other Spaces, founded by artist Olafur Eliasson and architect Sebastian Behmann, has put together an installation with work from 50 participants in the central pavilion in the Giardini. The presentation sits atop a massive carpet woven from recycled ocean plastic, and imagines a “Future World Assembly” where legislation protects the rights of entities beyond human beings, such as trees, fungi, and even rocks. 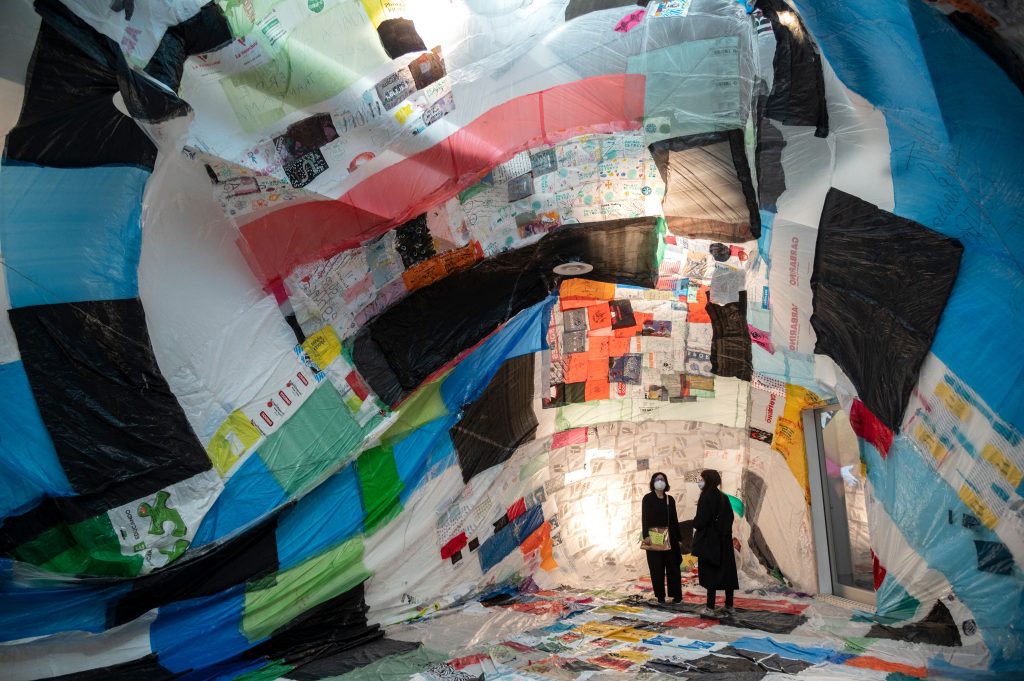 Aerocene Foundation, “Museo Aero Solar for an Aerocene Era” in the international exhibition at the Venice Architecture Biennale. Photo by Marco Bertorello/AFP via Getty Images.

The Aerocene Foundation is a nonprofit founded by Argentinian artist Tomás Saraceno. Its team of 200 spent the past two years stitching together the Museo Aero Solar, an inflatable floating sculpture that can fly without fossil fuels. It’s made from used plastic bags, thousands of which were collected from 30 countries around the world. The project’s hope is to usher in a new epoch free of fossil fuels to follow on the heels of the Anthropocene. 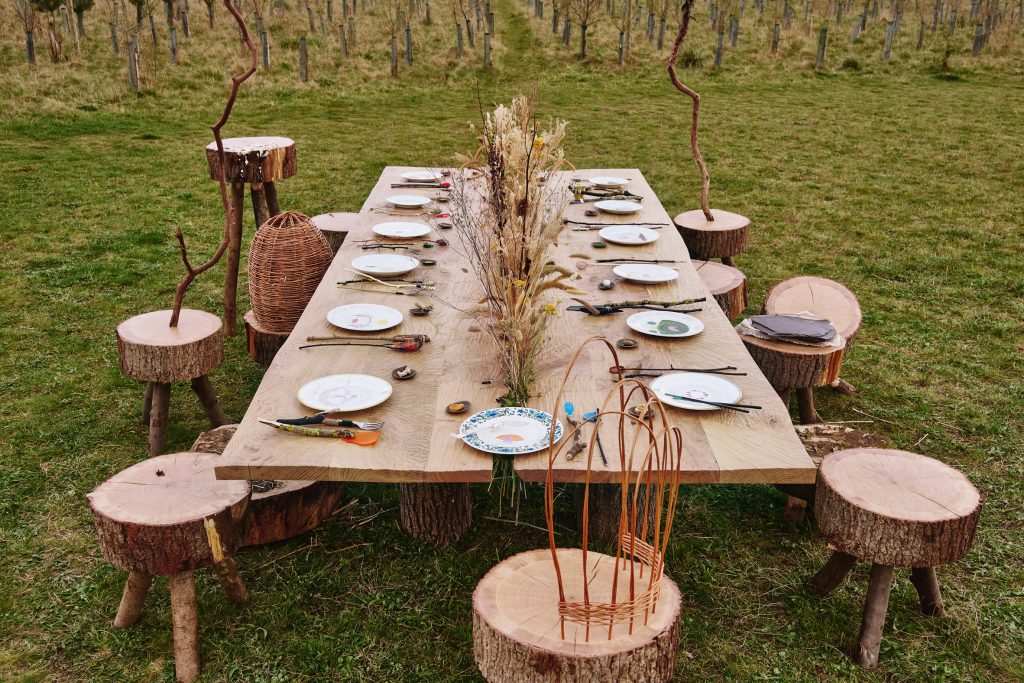 Superflux, “Refuge for Resurgence” at the Sylva Foundation in Didcot, Oxford, ahead of the Venice Architecture Biennale. Photo by Mark Cocksedge.

Superflex welcomes visitors to a post-Anthropocene banquet where plants and animals have a seat at the table (made a massive slab of oak), with chairs made to seat 12 different species, including humans, reptiles, farm animals, birds, insects, and even rats and wasps. It’s part of an imagined future where wildlife has reclaimed our cities. 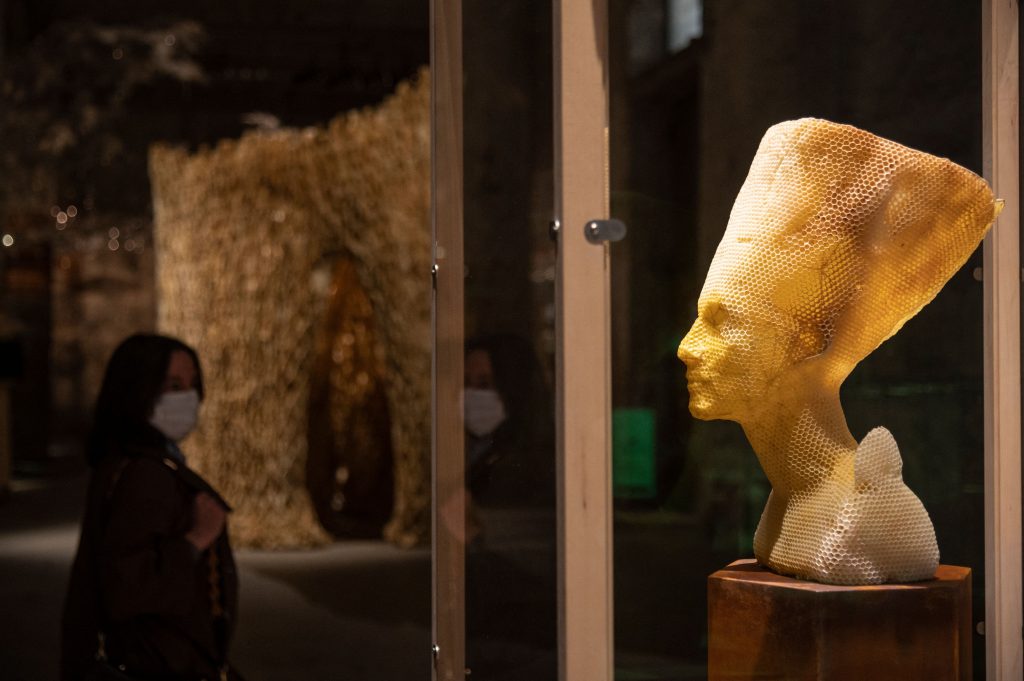 A visitor views “Beehive Architecture” by Tomas Libertiny at Slovakia’s pavilion, on a press day at the 17th Venice Architecture Biennale in Venice on May 20, 2021. Photo by Marco Bertorello/AFP via Getty Images.

“Beehive Architecture” is an exhibition of honeycomb sculptures created by swarms of more than 60,000 honeybees that take the shape of iconic forms, like Nefertiti’s bust, as well as more abstract figures. Tomas Libertiny provided the bees with 3-D printed armatures and let the bees go to town. He calls the process “slow manufacturing,” allowing for minimal intervention to the natural process. Debuting just after World Bee Day on May 20, the works are meant to raise awareness to the threats to the species, an essential pollinator.

Dutch Pavilion, “Why Is We?” 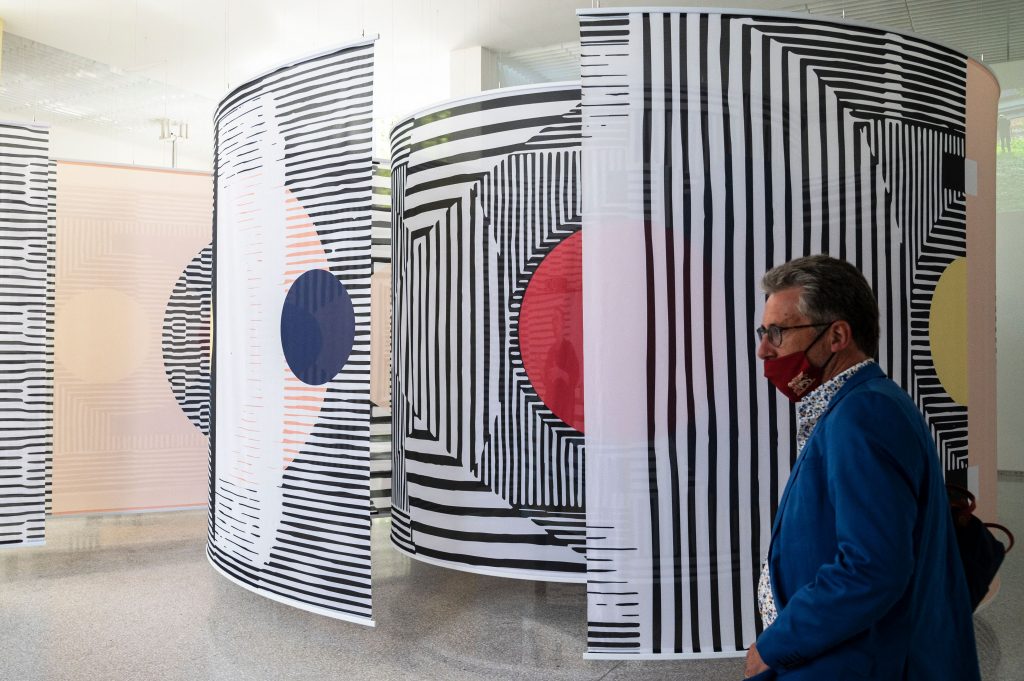 A visitor views “Why is We” by Afaina de Jong and Debra Solomon at the Dutch pavilion of the 17th Venice Architecture Biennale in Venice on May 19, 2021. Photo by Marco Bertorello/AFP via Getty Images.

In response to the question posed by this year’s biennale exhibition, “How Will We Live Together?” architect Afaina de Jong and artist Debra Solomon want to know “Who Is We?” The Dutch pavilion, from the Het Nieuwe Instituut, offers a critique of architecture that is created with only a small group of mind, calling for design that is more inclusive of diverse identities. 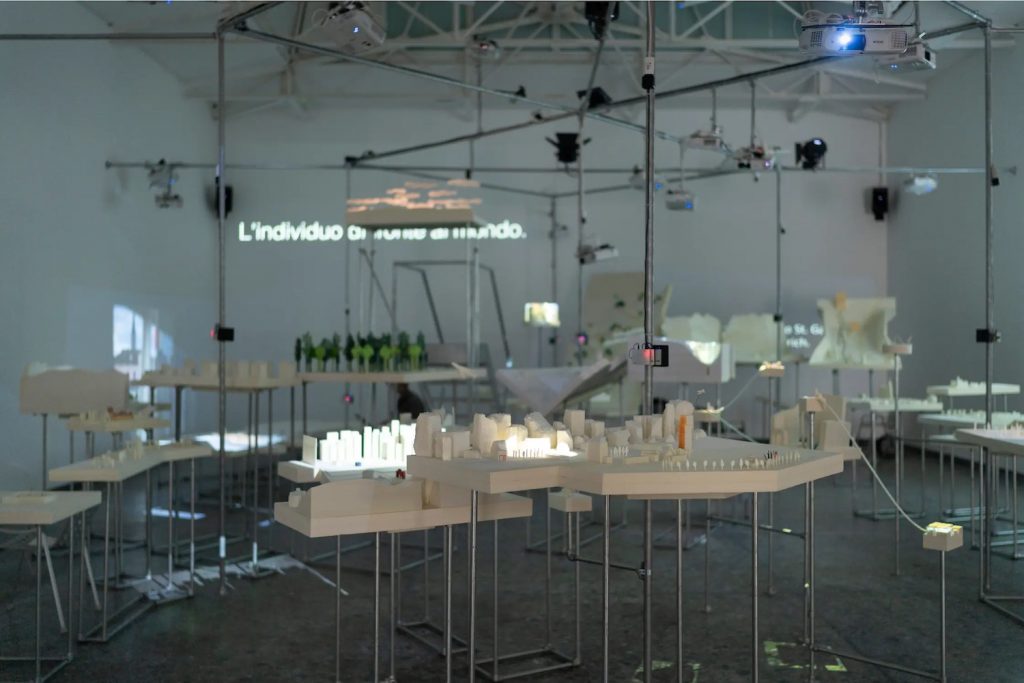 One of the most prescient international issues addressed at the biennale is that of borders: how they are drawn, who they keep in, and who they are meant to keep out. (The title, oræ, is Latin for borders.) In completing the project, the curators of this pavilion traveled to visit those living on the Swiss border, and invited them to construct an imagined or real place. A raft of border restrictions triggered by the global health crisis prompted the organizers to revisit original interview subjects to see how their perceptions had changed. 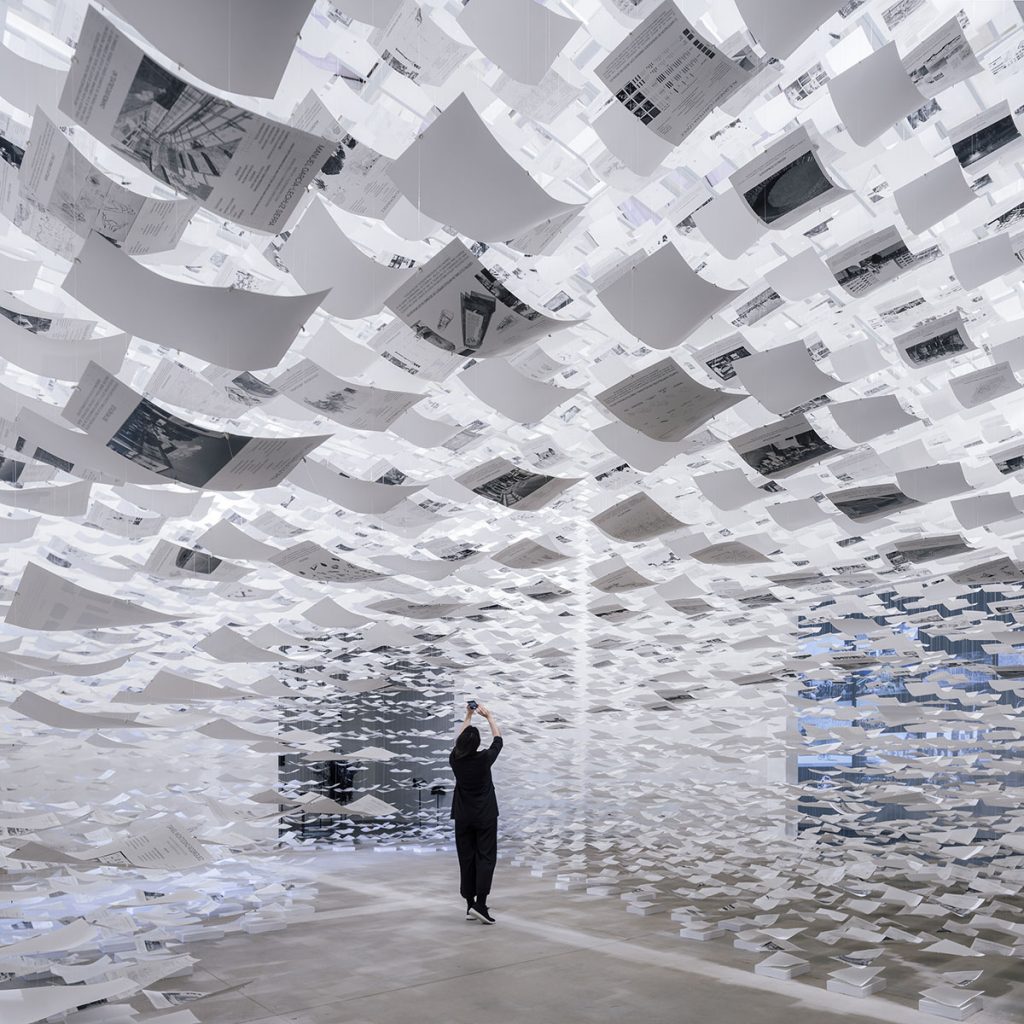 The Spanish Pavilion is a rumination on ideas of doubt. “Uncertainty is a cabinet of curiosities; a wide range of unorthodox objects not found in traditional conceptions of architecture that will lead us to explore new territories,” the curators said in a statement. The physical realization is a floating chamber of thousands of pieces of paper, suspended in the air in an immersive installation. The papers are answers to the question of the biennale, and are the proposals for living together chosen from an open call to architects around the country. 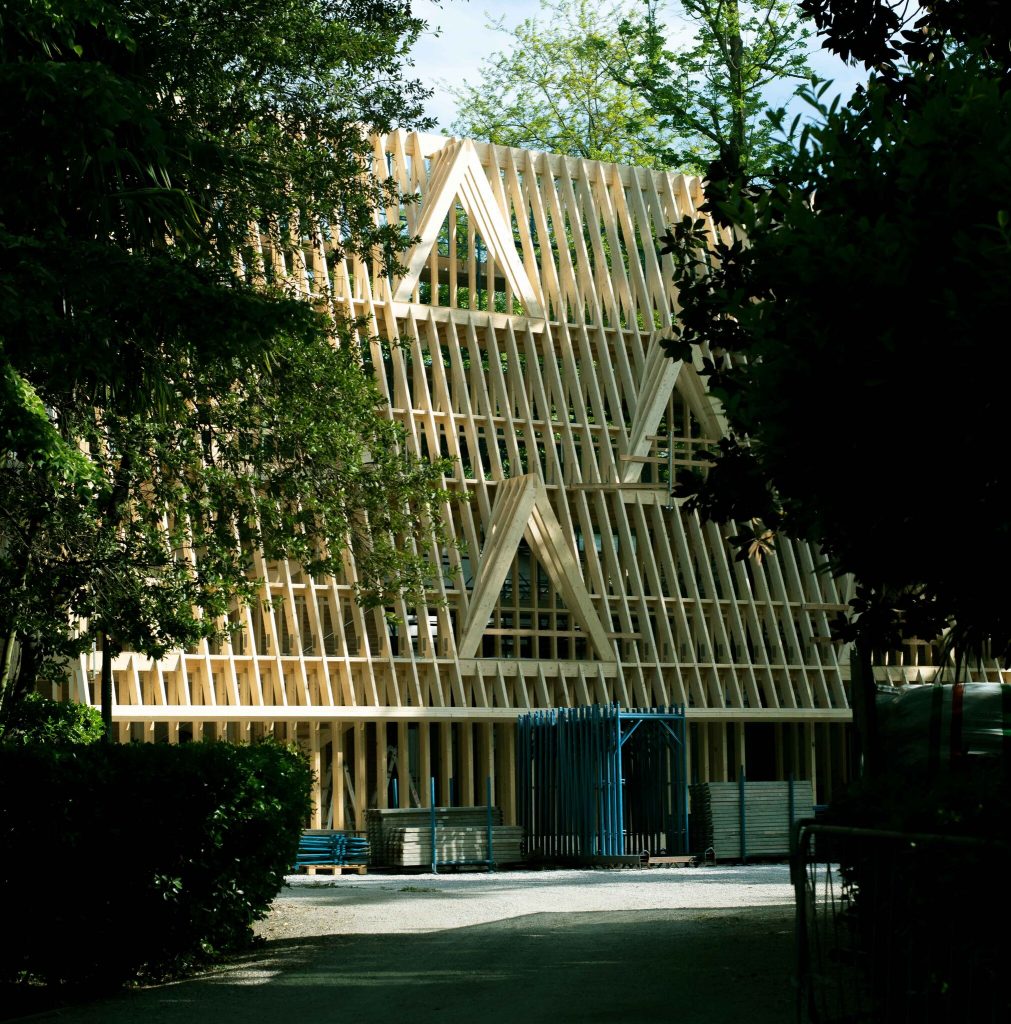 A frame-only wooden structure has been built in front of the U.S. pavilion at the Venice Architecture Biennale. Photo courtesy of Paul Andersen and Paul Preissner.

Commissioned by the University of Illinois at Chicago, “American Framing” takes as its starting point the wood framed construction process that became popular in the country in the 19th century and still is used in 90 percent of new homes today. Curators Paul Preissner and Paul Andersen have installed a four-story, wood-framed installation in front of the pavilion, which features models of historical buildings and newly commissioned photographs and furniture based on this overlooked form of construction. 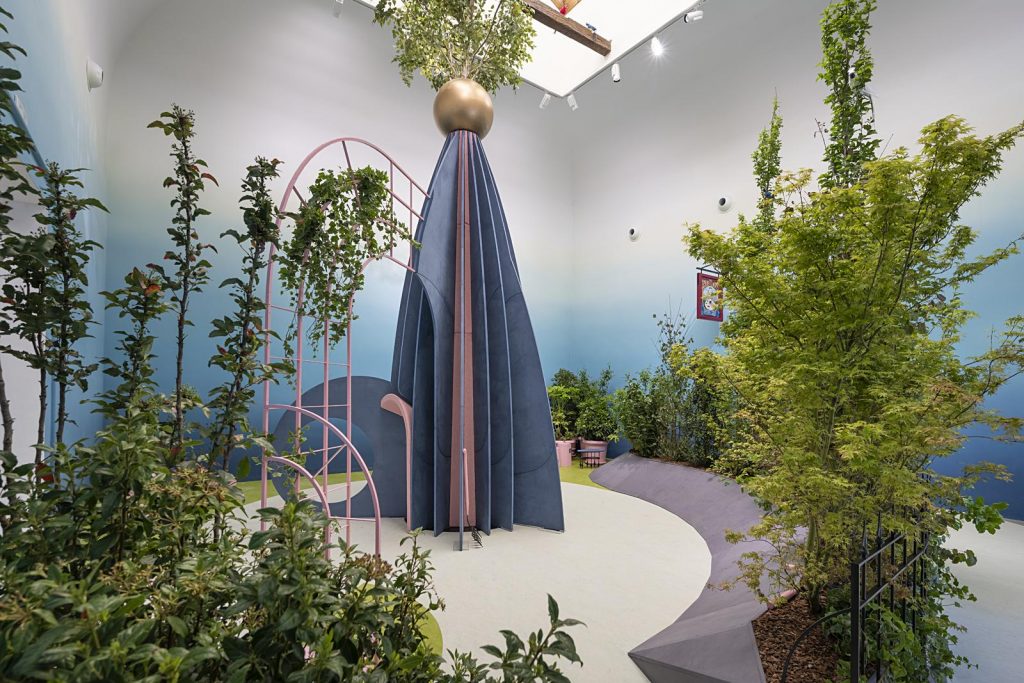 The British Pavilion, “The Garden of Privatised Delights,” at the Venice Architecture Biennale. Photo by Cristiano Corte, courtesy of British Council.

Manijeh Verghese and Madeleine Kessler, founders of Unscene Architecture, have put together a pavilion with six immersive environments recreating privatized public spaces. The exhibition serves as a critique of the ways in which these spaces exacerbate societal divides, and calls for the implementation of new models of public space. 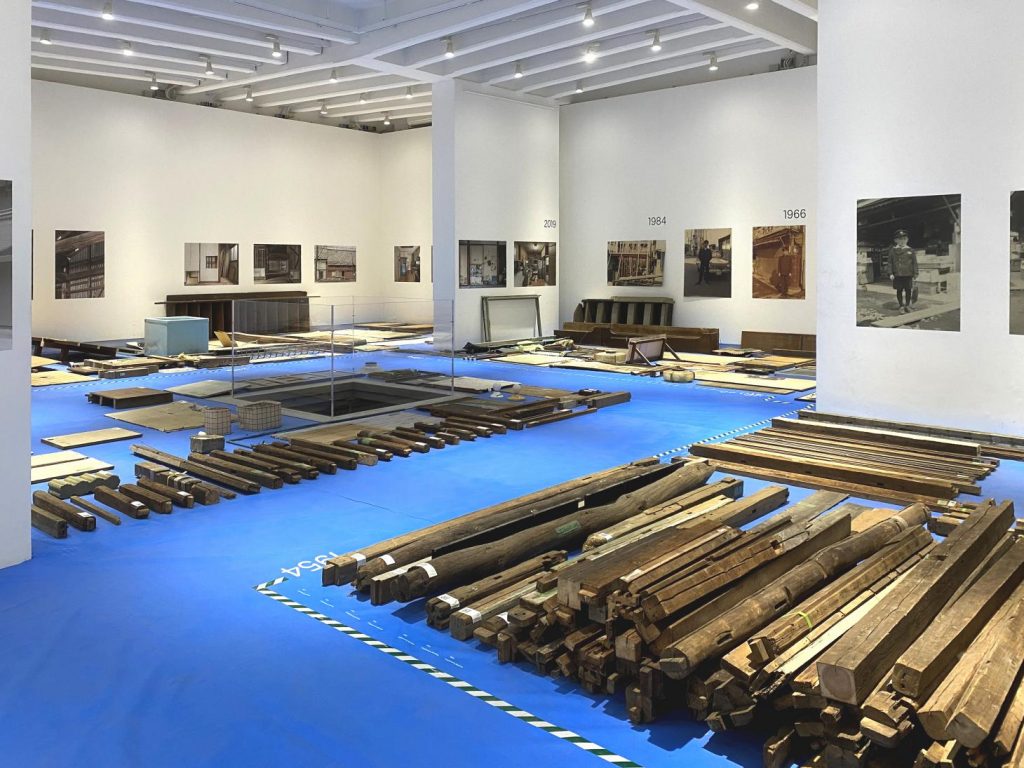 Japanese Pavilion, “Co-ownership of Action: Trajectories of Elements” at the Venice Biennale. Photo courtesy of the Japan Foundation.

A traditional wooden Post-war Japanese house has been disassembled and shipped halfway around the world to be displayed in pieces at the biennale, alongside photographs of the home from various points in its history. Architect Jo Nagasaka will return the building to Tokyo and put it back together after the exhibition’s run. 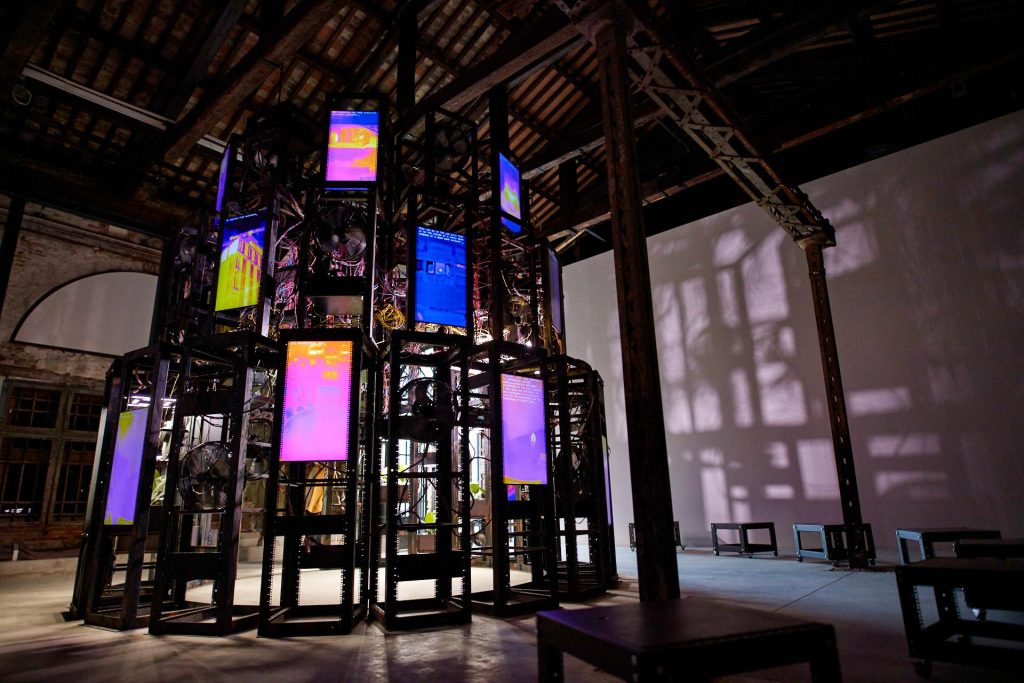 The global data network is represented by a charred steel structure full of screens and cables, meant to illustrate the human, environmental, and cultural impacts of information and communication technologies. The pavilion questions the cost of Ireland’s increasing economic reliance on data centers when servers in Dublin can emit heat if someone thousands of miles away likes a Facebook post. 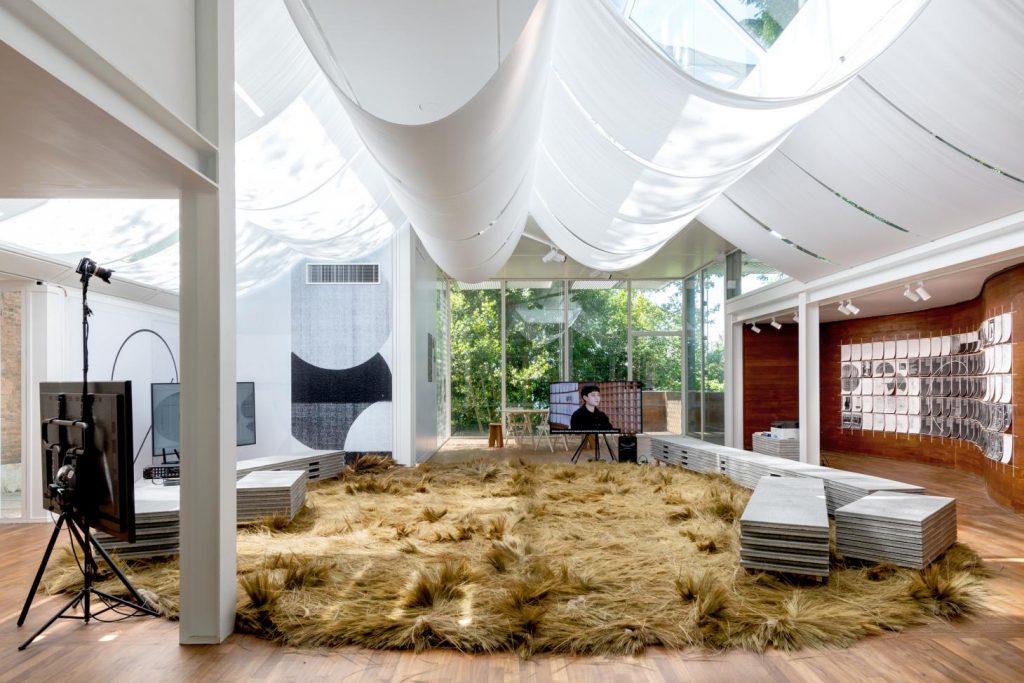 The South Korean pavilion tackles major issues including migration and climate change with a futuristic school based on traditional Korean home. Visitors can drink water and tea in the kitchen, or gather in a central assembly space with dried reed carpet. “A house, a well and a garden—a shared space for gathering, learning, rest and contemplation. This was the fundamental concept behind Future School’s occupation of the Korean Pavilion,” curator Hae-Won Shin explained in a statement. 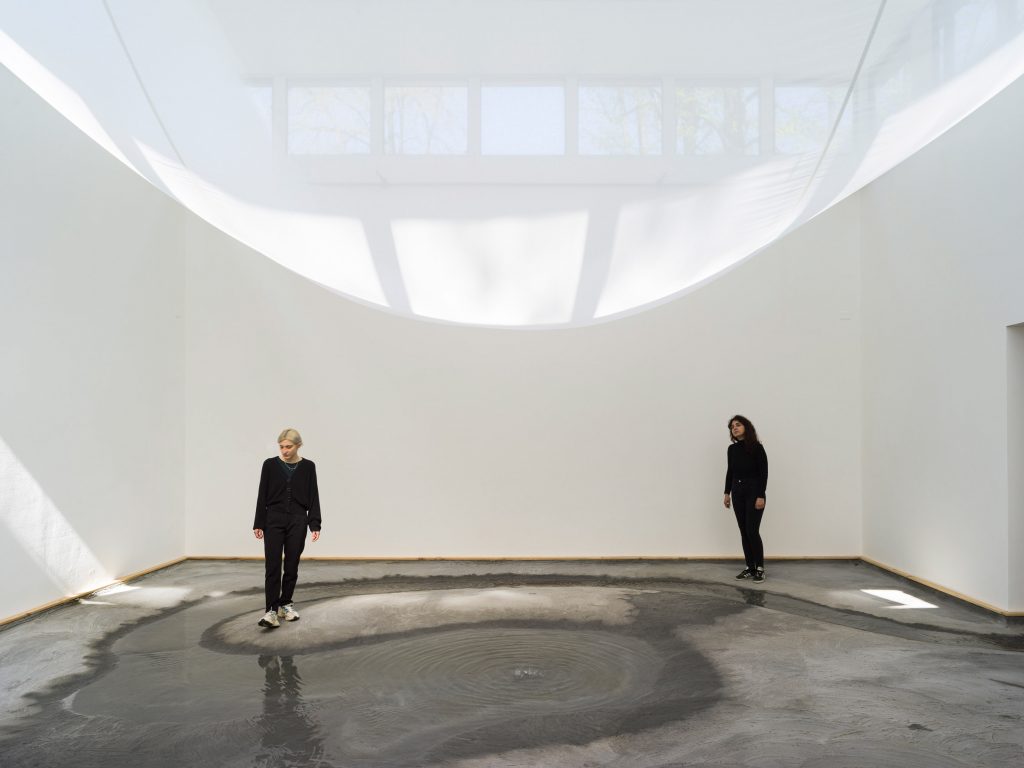 Lundgaard and Tranberg Architects, “Con-nect-ed-ness” at the Venice Biennale. Photo by Hampus Berndtson.

Lundgaard and Tranberg Architects are collecting rainwater and recirculating it throughout the Danish pavilion in this presentation commissioned by the Kent Martinussen Danish Architecture Center and curated by Marianne Krogh. Water drips from leaky pipes, creating a stream one must cross by footbridge, leading to a flooded hall. The water is also being used to cultivate an herb garden, with servers offering visitors a cup of tea brewed from the plants grown on site, illustrating water’s life-giving nature. 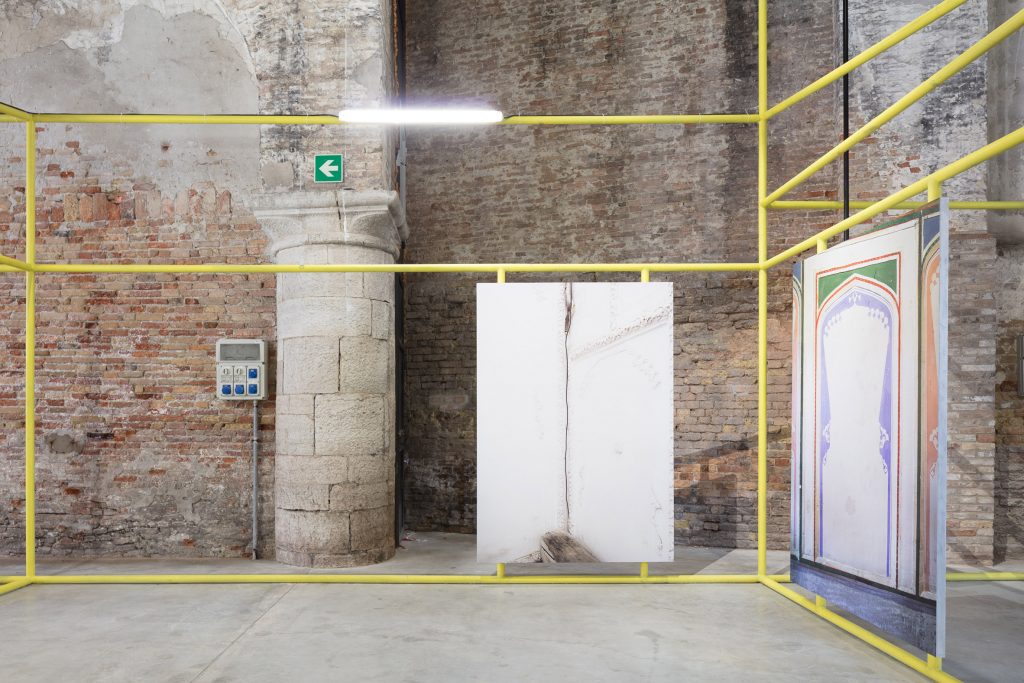 For its first-ever contribution to the biennale, Uzbekistan offers a celebration of mahallas, an endangered form of communal living featuring densely built rural houses with courtyards. Curators Christoph Gantenbein and Emmanuel Christ believe that mahallas, which can house between 150 and 6,000 inhabitants, can offer a sustainable model for urban development. A team from ETH Zurich worked with local students and researchers from the lab at the Center for Contemporary Art in Tashkent to build an abstract full-scale model of a mahalla house using yellow steel tubes.

Lebanese Pavilion, “A Roof for Silence” 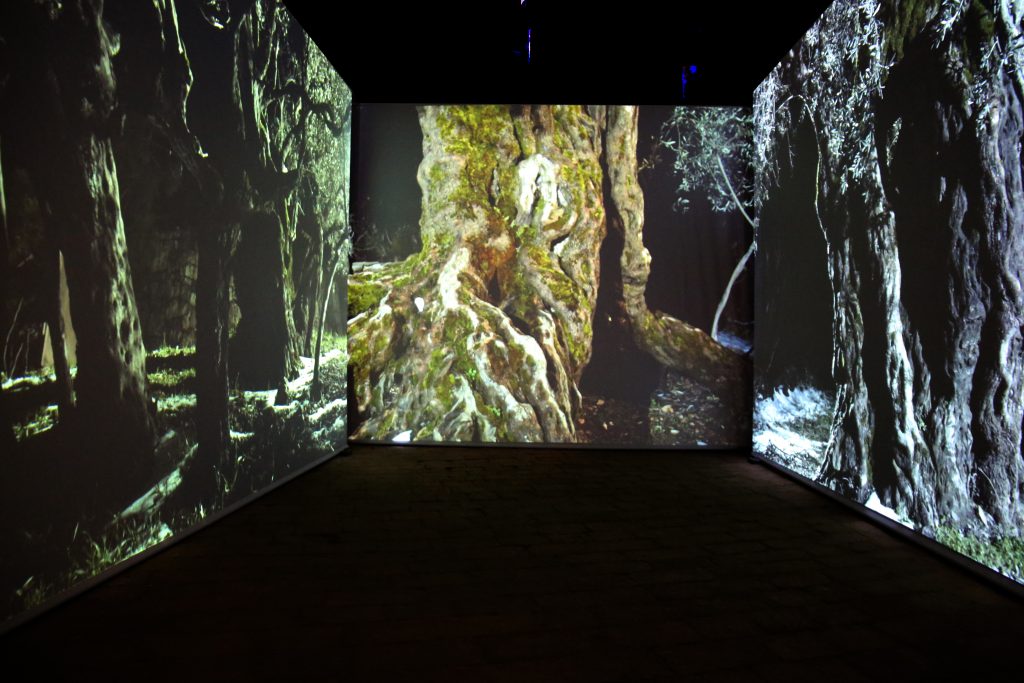 Curator Hala Wardé offers an interdisciplinary installation blending architecture, painting, music, poetry, video, and photography on the theme of silence, inspired by a grove of 16 thousand-year-old olive trees in Lebanon. There is a triptych video projection of the trees by Alain Fleischer paired with a soundtrack by Soundwalk Collective, while glassblower Jeremy Maxwell Wintrebert has transformed broken glass from last year’s Beirut bombing into a trail of molten-looking sculptures on the ground. 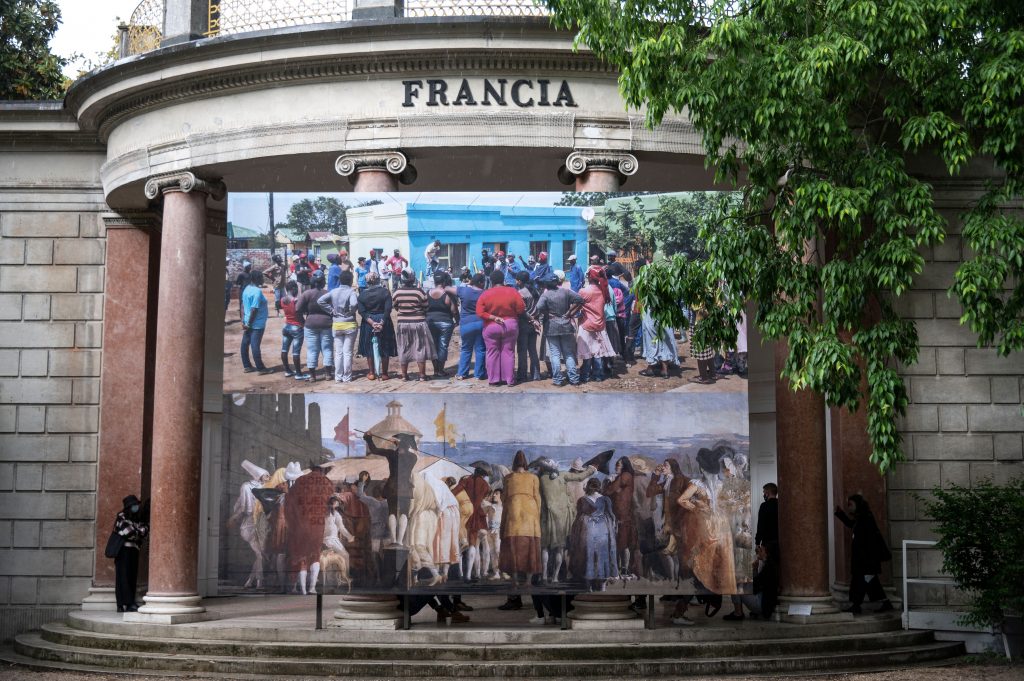 A visitor views “Les Communautés a l’Oeuvre” by curator Christophe Hutin in France’s pavilion at the 17th Venice Architecture Biennale in Venice during a press day on May 19, 2021. Photo by Marco Bertorello/AFP via Getty Images.

Curated by Christophe Hutin, the French pavilion takes an international perspective this year, looking to local residents around the world to see how they have shaped their living spaces to fit their needs and to respond to the challenges specifically facing their communities. The cities of Hanoi, Vietnam; Soweto, South Africa; Bordeaux, France; Detroit; and Johannesburg serve as case studies.